For many motion graphics artists, After Effects serves as their hub where they bring in content from multiple sources (such as 3D applications), enhance it, and then send it out to multiple destinations (such as web pages or editing systems). Therefore, it has to handle a multitude of file and application formats. The previous chapter focused on file-level issues; this chapter primarily discusses higher-level issues of dealing with different programs – although exchange file formats inevitably creep into the mix as well. Here’s a few tips and hidden gems from that chapter. 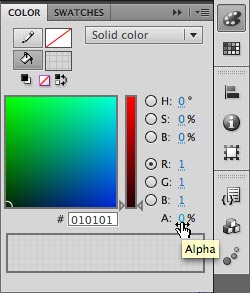 After Effects can recognize transparency in a SWF file; you just have to make sure you set up your project in Flash to have transparent areas. To do this, you need to create a custom background color in Flash: In the Color panel, create a new color with Alpha set to 0%. Then bring the Swatches panel forward, and click along its bottom to add this color to your palette. It will be identified with a graph paper pattern. Then in the Properties Inspector, select this transparent swatch for the Stage color.

By the way, when you import any content originally created for the web – SWF, FLV and F4V files included – you should never separate fields; you’ll just lose half your resolution. Similarly, when you’re creating content for the web, never interlace (field render) your renders, as normal computers do not have interlaced displays. 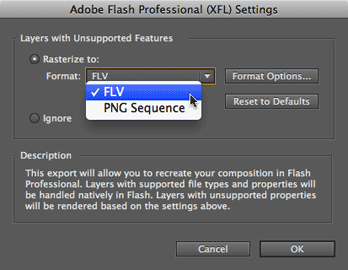 As nice as this feature sounds on the surface, it brings with it a lot of special case exceptions and gotchas, such as no current support for audio(!), and any keyframed animation is either rendered to a movie during export or converted into a transform keyframe for every single frame in Flash’s Motion Editor (as seen in the figure below). We spend a few pages on these issues – along with an example project – in the CMG book.

An example of this bidirectional transfer is shown below, where an After Effects composition has been pasted into a Premiere Pro sequence:

Going further is Dynamic Link, where you can link an After Effects composition into Adobe Premiere Pro or Encore in its unrendered state and use it as a footage item. These applications will render the comp “on demand” to display a specific frame.

Integration with Avid or Apple systems is understandably less straightforward. Although there are various workarounds, in a situation where time is money, third party vendor Automatic Duck’s Pro Import AE plug-in set is money well spent. Note that in these cases, the transfer is one way: You can bring Avid and Apple timelines into After Effects, but not export back to these systems (aside from rendering a final movie). The new FCP-X is also not currently supported – although Automatic Duck has already figured out how to export from FCP-X to Digidesign ProTools, so hope springs eternal that other solutions might also be forthcoming. 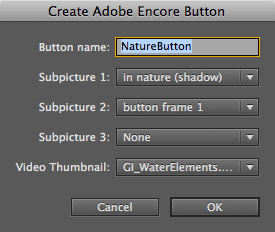 Encore requires very specific naming conventions to know which layer is supposed to be which element in a button. To automatically rename these elements in the format Encore requires, select the layers that make up the button elements, and choose the menu item Layer > Adobe Encore > Create Button. Here you have the opportunity to tell After Effects which layer corresponds to which menu element, and After Effects will nest the selected elements into a new composition that has the button’s name, with (+) appended to the front which tells Encore this is a button.

Creating content for mobile devices is an important business segment for some. The problem is that there are a number of devices out there, and many have different specifications and requirements. This process has been aided by the ability to use Adobe Device Central – installed alongside After Effects – to automatically build a chain of After Effects compositions.

After defining your target devices, Device Central can export an After Effects project that contains a chain of compositions, shown above (using AE’s Mini Flowchart feature). These comps provide guide layers that show the safe areas for each device in a single Device Master composition. This Device Master comp then feeds a number of render comps where the source has been scaled and cropped as needed for each target device. Finally, these individual render comps feed a final Preview comp where you get to compare the relative crops and scalings side by side: 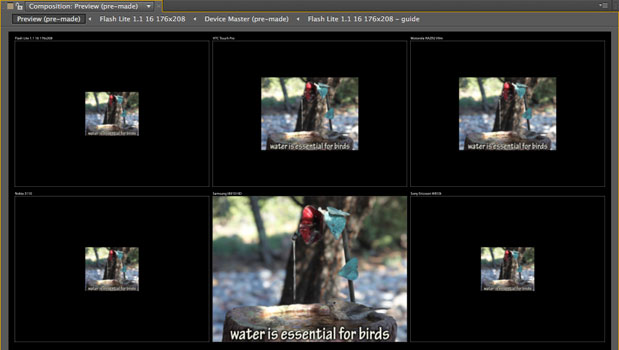 The biggest disappointment with this feature is that it does not set up the After Effects Render Queue with the correct codecs and bit rate settings for each target device; you still need to do some final work in a program such as Adobe Media Encoder. But it still saves a lot of steps.