After Effects has never made audio one of its strong points. If you need to seriously rework a soundtrack, do it in a dedicated audio program (such as Adobe Audition, which is now part of the Production Premium suite as of CS5.5). But if you just need to edit, mix, and do some basic improvement or “sweetening” to your sound track, After Effects already has the tools you need. In this installment, we’ll share some tips on working with audio; in the next installment, we’ll cover audio effects. 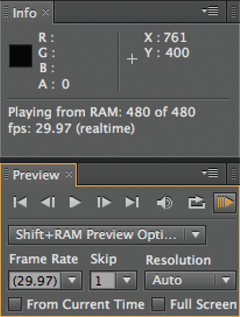 Unlike video, audio cannot be previewed by pressing the spacebar – you will need to either perform a realtime preview, or scrub it. You can perform a normal RAM Preview by either pressing 0 on the numeric keypad or clicking the Preview button at the far right in the Preview panel (the one highlighted in yellow in the figure at right), which will calculate and play back both audio and video. The playback frame rate will be displayed in the Info panel, as seen here; if playback is not in realtime, then the audio will be out of sync with the video.

When spotting audio (discussed below) or just becoming familiar with the soundtrack, we often preview the audio by itself. To do that, press the decimal point key on the numeric keypad.

(Mac laptop owners with CS5 or later, who no longer have access to a faux extended keypad using function keys: Hold Control and press the equivalent key, such as 0 for RAM Preview, period (.) for audio-only preview, and 8 (*) for placing markers.)

Few know that you can also “scrub” audio in After Effects: Hold down the Command (Control) key while you’re moving the time indicator with your mouse. Scrubbing will play a single frame of audio for each frame you move the time indicator to. If you hold the cursor in place without moving, after a pause After Effects will start playing a one-third second loop of the audio, starting at the current location of the time indicator. This works in the Footage, Layer, and Timeline panels.

If you want to use audio to drive an animation, you need to employ an intermediate step. Select Animation > Keyframe Assistants > Convert Audio to Keyframes creates keyframe values that match the combined amplitude of the audio waveforms in a comp. This is great for driving expressions, which is the subject of Chapter 37.

Frankly, the Convert Audio to Keyframes function is a bit rudimentary; if you want more control, there are some great third-party alternatives: Sound Keys from Trapcode, and Beat Reactor included in Boris Continuum Complete.

Tall, spiky areas in the audio waveform – which indicate percussive events, or the onset of many sounds – tend to be good “hit points” for keyframes and edits. As the waveform takes up a lot of room in the Timeline panel and also can be slow to redraw depending on your zoom level, we often place layer markers on either the layer containing the audio, or on a separate dummy layer (such as a Null Object) adjacent to the audio layer:

You can add a layer marker at the current time to the selected layer by pressing * on the numeric keypad; hold Option on Mac (Alt on Windows) while pressing * to open a dialog to add a comment – or just double-click an already-placed marker. To add a composition marker, press F2 to make sure no layers are selected before pressing *.

An additional advantage is you can then drag the Current Time Indicator or a keyframe, and add Shift to cause it to snap to marker locations.

After Effects interpolates between Levels keyframes using the power-oriented decibel scale, not normal percentage. This results in fadedowns that can range from natural to slightly abrupt. Fade-ups sound very unnatural, seeming to linger at the lower volume, then suddenly rushing up to the higher volume. Given this problem, we take a two-step approach to mixing audio in After Effects:

This may seem like more work initially, but it will save your sanity later. For example, if you already keyframed fade-ups and fade-downs using Stereo Mixer, then later decided the entire track needed to be louder or softer (but wanted to keep the fades), you could just alter the layer’s Levels parameter and leave your keyframes alone.

Stereo Mixer gives linear fades rather than the exponential fades that the Levels parameter yields. As noted above, due to a quirk in the way Levels is animated in After Effects, the linear fades will actually sound more natural in many or most cases. To improve on this further, we ease into the second keyframe of a fade. In the figure below, we have the Stereo Mixer revealed in the Graph Editor; the Value graph shows the softened exponential-style fade shape that results:

By the way, as you might have noticed in the figure above we use expressions to tie Stereo Mixer’s Right Level to its Left Level; this means we only need to keyframe the Left value rather than both.