The Roto Brush is a relatively new tool introduced in After Effects CS5 that helps automate creating a matte to separate a foreground from a background, such as isolating an actor from the room around him. To accomplish this, you draw brush strokes to teach After Effects the difference between the two. After Effects uses this information in conjunction with edge detection, motion tracking, and optical flow technologies to follow the changes in foreground and background over time.

Roto Brush is not perfect, but it’s a lot easier than hand drawing and animating precise mask shapes (plus you can use the Paint tools – the subject of the previous chapter – as well as masking to help clean up any problem areas that the automated Roto Brush may have misinterpreted). In this chapter in the Creating Motion Graphics book, we guide you through a preferred workflow for achieving good results with Roto Brush. Here are a few tips, hidden gems, and general advice from that chapter.

Painting Inside the Lines

We’ve seen many users start off using Roto Brush as they might use normal paint tools: They open their clip in the Layer panel, select the Roto Brush tool, set a very small brush size, and start carefully drawing along the edge of the object they wish to cut out. Not only is this unnecessarily fiddly, it runs the risk of accidentally including portions of the background as part of your foreground definition.

Instead, the preferred workflow is to start with a larger brush size (the Roto Brush may be interactively resized the same as the normal Brush tool, demonstrated in the previous Hidden Gems), and make a large stroke through the area you want to keep, as shown below left. This will give Roto Brush slightly better information to work with in defining the foreground, plus help save you from premature carpal tunnel syndrome! You may then optionally hold Option on Mac (Alt on Windows) and draw a broad stroke defining the background as shown below right; this is helpful if Roto Brush has difficulty finding the edge between foreground and background. 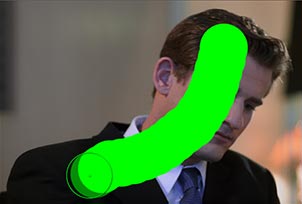 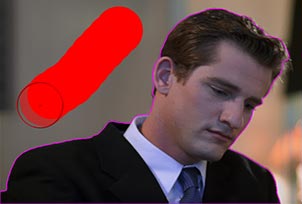 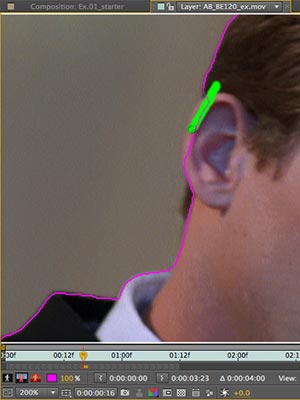 Once you’ve made these broad definitions, then you go down to a smaller brush size and paint in smaller details, such as the area around the man’s ear in the image at right.

Propagate Before You Leap

The second most common mistake we see with Roto Brush is that after creating an initial “base” frame, users then immediately start stepping through adjacent frames and making corrective strokes. After potentially finding themselves having to make corrections on nearly every frame, many give up, declaring that Roto Brush doesn’t work. 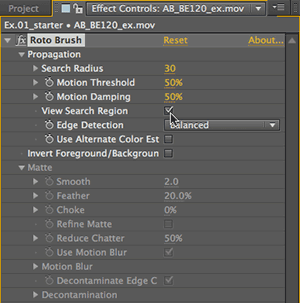 In reality, though, creating the base frame only gives Roto Brush part of the information it needs – your next step is telling Roto Brush how to propagate this information outward from the base frame before you make additional corrective strokes. This is where the Propagation section of the Roto Brush effect (pictured at right) comes in: Step about 2-3 frames away from your base frame, and adjust these parameters to minimize any tracking errors you see. If nothing else, try out the different choices for the Edge Detection popup: The Favor Current Edges option puts an emphasis on edges found in the current frame in isolation, which may be more accurate if the image changes a lot from frame to frame. The Favor Predicted Edges option tries to predict where the edge should be based on the location of those edges in adjacent frames (which helps when the footage is noisy, or the foreground and background are very similar). Balanced considers both equally.

Often while working on a rotoscoping type of job, you don’t need to preview the entire clip to check your work; you’re usually focused on a particular set of frames around the Current Time Indicator. Well, there’s a app modifier key for that: Press Option (Alt) when initiating a RAM Preview, and just a few frames up to and including the current frame will cache and play. The number of frames defaults to 5; this may be changed in Preferences > Previews > Alternate RAM Preview.

If you have created multiple base frames and corresponding span, and are unhappy with one of them, right-click on it and select Remove Span – this deletes the span, but leaves the strokes. Note that if you have only one Base frame, Remove Span will be grayed out. To delete all strokes on the frame you are viewing in the Layer panel, press Command+A (Control+A) to select all, then press Delete. To delete a specific stroke, type PP to reveal the strokes in the Timeline.

Roto Brush can take awhile to calculate – especially if you jump to a frame that’s some distance from a base frame, as it must track and re-calculate the Segmentation Boundary for every frame in-between.

Good news: You can click the Freeze button in the lower right corner of the Layer panel (shown here) to lock the Segmentation Boundary in place, save it with your project, and prevent time-consuming recalculations later. Just remember to unfreeze if you want to make a correction to the segmentation!