After Effects offers a large variety of keying plug-ins that are designed to isolate a particular color or luminance range in an image, and convert those areas to transparency. In many cases, you can ignore most of them as relics from AE’s early days, and focus just on Keylight from The Foundry: a popular industrial-strength keyer bundled free with After Effects (even the trial version, as of CS5.5). That said, some of the other keyers have worthwhile specialized uses. And Chapter 27 in CMG5 also covers related topics such as edge blending and color correction. We’re going to focus primarily on those fringe issues here, and leave the in-depth tutorials to the book. 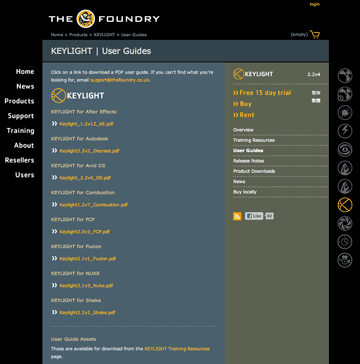 The Foundry has an excellent user guide for Keylight as well as real-world example files for you to work along with. However, they keep re-organizing their website, meaning this guide can no longer be found where we mentioned in the book. Here is the current direct link to the Keylight User Guide page. The tutorial assets can be found on this separate page. (Until they update their website again.)

By the way, Adobe plus lynda.com also commissioned us to create a video tutorial on using Keylight for After Effects CS3; many (but not all) of the parameters are the same as the latest version. 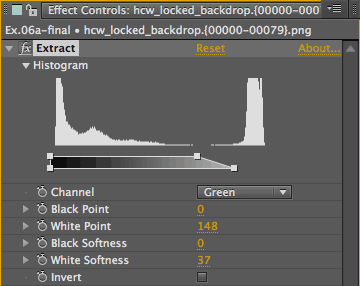 This enhancement on a straight luminance keyer focuses on a single channel of information: alpha, overall luminance (good for black or white backgrounds), or just red, green, or blue (the background color you wish to remove). It gives you a visual reference of the luminance values active in this channel (the histogram), and a Transparency Control Bar underneath where you can decide what ranges of this color to key – a clever user interface tool.

In general, being able to “read” a histogram is a useful skill. In case you’re not yet comfortable with them, the height of the histogram graph gives a visual indication of how many pixels in the image share a particular luminance value, from the darkest at the left to the brightest at the right. The taller the graph, the broader an area of image that shares that luminance value. 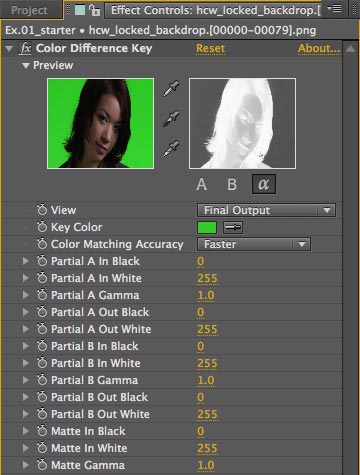 Before Keylight and other high-end third-party keying plug-ins came along, the Color Difference Keyer (CDK for short) was the top dog among the options Adobe had to offer. Although it is complex to use and some would say outdated, a few experienced visual effects artists continue to insist that its “channel operations” approach is still the best way to build a keyer.

The basic premise of the CDK is that there are three mattes. Let’s say the keying color is green:

If you feel like going old-school, dive into the book’s DVD and dig out Bonus Chapter 27B, which we updated in CMG5 to reflect After Effects CS5 as well as the more challenging high-def keying source material (generously provided by Hollywood Camera Work) that we supplied in this edition of the book. 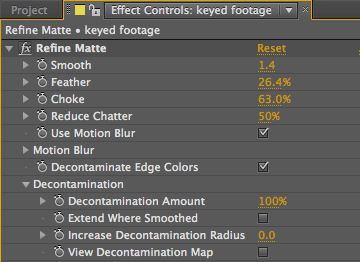 An alternative to using the Spill Suppressor, Matte Choker, Simple Choker, and related effects is to apply the new Refine Matte plug-in, introduced in After Effects CS5. Use your keying effect of choice just to create a hard-edged alpha channel (no feathering or color correction), and then apply Refine Matte to smooth, choke, and feather the edges, remove (“decontaminate”) the spill color, and create partial transparency where edges should be motion blurred from movement in the underlying shot. We’ve had some success with this approach on shots with lots of motion blur, which might otherwise be hard to key and color correct due to semitransparency in those blurred areas.

As the standalone Refine Matte effect was spun off from the similarly named section of the also-new-in-CS5 Roto Brush effect, we discuss its operation in greater detail in CMG5’s Chapter 34, which is dedicated to the Roto Brush. 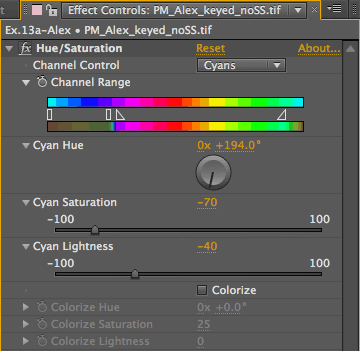 As an alternative to standalone spill suppression effects or similar sections built into some advanced keying plug-ins, we sometimes use normal color correction plug-ins to remove color spill, focusing on a specific color range (namely, that related to the colored backdrop which may be spilling onto your foreground).

For example, we often use the Hue/Saturation effect (pictured here): Pick a color from the Channel Control popup that is similar to your backdrop (such as green or cyan), then tweak the sliders underneath the Channel Range bar to fine-tune it to the color of the spill. Finally, desaturate or hue shift the spill as desired. A more powerful approach is to use the “secondary” color correction section of Color Finesse (also bundled free with non-trial versions of After Effects) to select a specific color range.

An alternative approach is to make the color spill work for you, pretending it’s actually a reflection or light emanating from your new background. When creating an abstract backdrop for keyed talking heads, we keep them in the same color range as the backdrop used on the set. That way, any spill, edge issues, reflections through glasses, etc. are more likely to be perceived as just the new background. 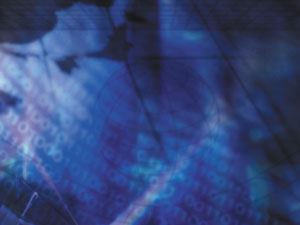 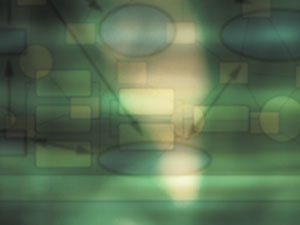 Examples of bluescreen (left) and greenscreen (right) backgrounds we created for Xerox Media West. We combined numerous stock library movies and stills with elements created in After Effects, Illustrator, and 3D programs to create something appropriate for each project.