Another selection of “hidden gems” (and essential advice), this time from Bonus Chapter 40B of Creating Motion Graphics with After Effects.

After Effects includes a set of 3D Channel effects, which take advantage of additional information embedded in files rendered from certain 3D programs. Since relatively few users have occasion to employ these, we covered them in a Bonus Chapter on the DVD-ROM that comes with CMG5 – including some of the naming and file format conventions you need to follow to make sure After Effects can import all of the available information. As not all 3D programs embed this information in their render, where practical we also provided alternative workflows that replicate the end result of these effects with files you should be able to generate from almost any 3D program.

How Do I Know If There’s Extra Information to Access?

3D Channel effects work only with specific file formats. The most flexible ones are RLA and RPF, which should contain color, alpha, and a large number of additional channels of information in one file. These files should be identified with the suffix .rla or .rpf.

When these files are imported and selected in the Project panel, the additional channels they contain or reference will appear along the top of this panel, just under the bit-depth information, as shown at right.

These files behave as normal color plus alpha footage items until you apply one of the 3D Channel effects to them. At that point, highlighting the effect in the Effect Controls panel allows you to click on their image in the Comp or Layer panels and have the additional channel information displayed in the Info pane. An example of Z Depth being displayed is shown at right.

Softimage and Electric Image users have direct access only to Z-depth information, which must be rendered into a file separate from the normal color + alpha render pass. In both cases, the resulting files should have the same main name, with different suffixes. For Softimage, the normal file must be tagged .pic while the Z-depth render must be tagged .zpic; for Electric Image, the main render is an Image file with a suffix of your choosing (normal is .img); the Z-depth file must use the suffix .eiz.

When you import these files, make sure both are in the same folder, and import only the normal 3D render – After Effects will find the Z-depth file automatically.

3D channel information gives an absolute value for each pixel, such as material #1 or #2. This often results in an aliased edge for the resulting matte. Rendering an image at least double size and scaling down in After Effects greatly improves these edges, at the cost of rendering time and disk space.

One strategy is to render your main color + alpha channel pass at normal size. Then render the special file with the additional 3D channel information at 2- or 4- size, using the fastest render options your 3D program offers. This will take less time to render than a full-quality image at this increased size. Import both into After Effects, apply 3D Channel effects to this second render, and scale it down (keeping Best Quality enabled) to match your normal render so the resulting images line up. This is essentially the same as when your 3D program oversamples the main render. 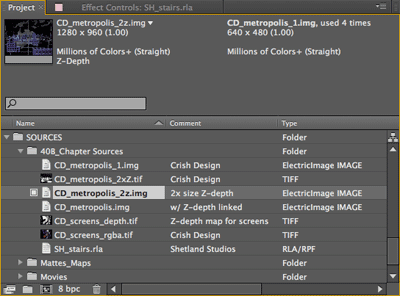 If you want to keep your normal render and your oversampled 3D channel render together and treat them as one file, there is a procedure to do so using proxies. First, import your oversampled 3D Channel render. With this file selected in the Project panel, select File > Set Proxy > File. Choose your normal render as the Proxy. Files with proxies applied will have two entries along the top of the Project panel when selected, as shown here.

Once you’ve done this, After Effects will scale up your image render to match the size of your special 3D channel render, but will still access the 3D channel information in your special render. You can treat the result as a single file; just remember to keep it at Best Quality and scale it down to fit your comp size. 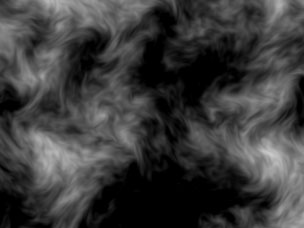 Fog is another effect that relies on Z-depth information embedded in or linked to by a 3D render. In short, what it does is take a color of your choice and blend it into the 3D image with increasing strength as the Z-depth values increase in the file.

This effect in its basic form can look very synthetic. To make it look more realistic, you need a Gradient Layer, which acts as a luma matte for the fog. You can select which layer in your composition to be used as the gradient directly in the Fog 3D effect. The image at right shows a swirling gradient layer; the two images below show Fog 3D in its normal application (left) and using the gradient layer (right): 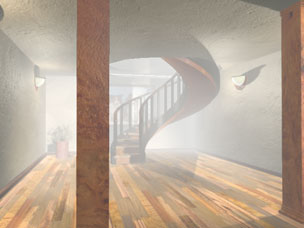 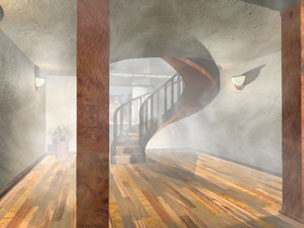 Even better is when this gradient layer animates. Consider using stock footage of drifting fog or smoke. Or you can use various fractal noise effects such as Effect > Noise & Grain > Fractal Noise. Just remember that if you use an effect to generate the gradient, the generation must be done in a precomp; compound effects such as Fog 3D that look at another layer see it before any effects have been applied in the current composition.

The point of most visual effects work is to look realistic; that’s the idea behind the suggestion above to use a smokey gradient to treat your fog. You can also use this to add a feeling of realism to otherwise stylized graphical work.

On the other end of the spectrum, the point of much motion graphics work is to look stylized and cool. For example, you might want to take your fog, colorize it, and use blending modes to create a surrealistic final composite. Below left is an example of using more realistic fog in a graphical scene; below right is the same scene using blurs, tints and modes to create a variation on the classic “instant sex” (aka “filmic glow”) effect: 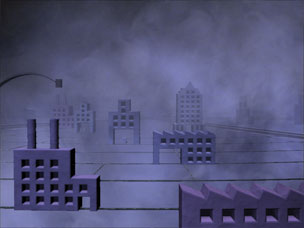 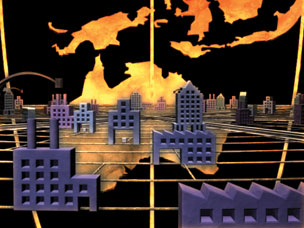