Working with 90-year-old technology is eye opening: you start to wonder how anyone managed to get quality images on film at all, let alone create dozens of silent film classics. Dealing with dozens of internal camera menus starts to look really simple.

When working with 90-year-old motion picture technology it’s not unusual to wonder how anything got made at all. Here’s what it took to make sure the shot was in focus and to ensure the operator could actually see what was in the frame.

Adam Wilt did a great job of showing what it’s like working on a modern silent film with a 90-year-old camera in his two recent articles (here and here). I thought I’d toss in my two cents on two key aspects of the experience.

I spent four days total assisting with the Bell & Howell 2709. (Note: I’m a DP. I haven’t assisted professionally in 20 years, but I went back to my roots to help with this project and touch film one last time before it’s gone.) By the fourth day I was pretty good with the camera, but it definitely took some getting used to.

The process you’ll see me doing the most in Adam’s video is checking focus and aligning the parallax finder with the taking lens. The 2709 is not a reflex camera: you can’t see through the lens while you’re rolling film. Instead you can see an approximation through the side finder, which has to be calibrated so that it shows you roughly what the camera sees at a specific distance.

When possible I’d put a C-stand in the set on an actor’s mark and line the side finder up to that. If the shot was a closeup I’d ask the actor to stay completely still and I’d line up on one eye. If we were shooting a wide shot and were framed to the edge of the set I’d set parallax on the set edge knowing that it was most important not to shoot off the edge of the set and 3″ of shift in foreground wasn’t that big a deal.

I took it upon myself to occasionally remind the DP that what he saw through the side finder wasn’t necessarily what he was getting, especially on shots where we were close to the action.

After a while I got into a rhythm:

The DP would find a shot. I’d hand him the side finder and he’d use it as a viewfinder by dialing in the focal length of the lens he wanted to use, which set ribbon markers around the frame. (Lens choices were 40mm, 50mm and 75mm, as that’s what was easily available at the time silent films were shot. We did have a 35mm that we used sparingly, partially because those weren’t widely available in silent film days but also because the side finder wasn’t wide enough to show the entire frame.) Once he found his spot I’d put the camera in position for him, on standard legs, baby legs or a hi-hat. I’d quickly level the camera and he’d quickly review his frame with the side finder on the camera, just to make sure we hit the right spot.

Next, I’d focus the lens. The camera sits on a sliding baseplate and has two positions: focusing position and taking position. The matte box rods are exactly in the center of this baseplate, and the lens is almost always centered over it. In focusing position the camera would be pushed to the left of the baseplate with the taking lens set on the right side of the turret. In that position I could look through a prism on the right side of the camera and look directly through the lens. 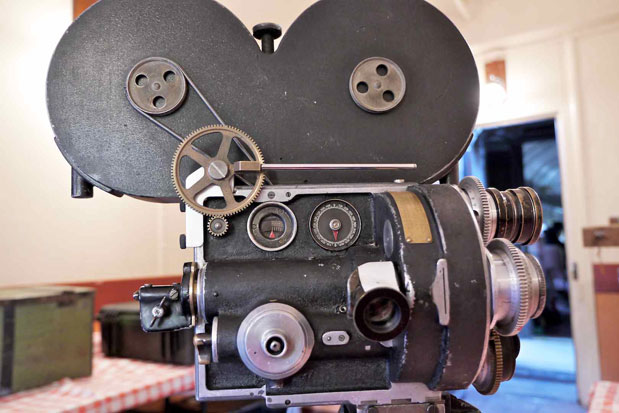 The prism finder. The piece of white camera tape is meant to preserve eyepiece focus on the ground glass. It had a habit of slipping out of focus otherwise. 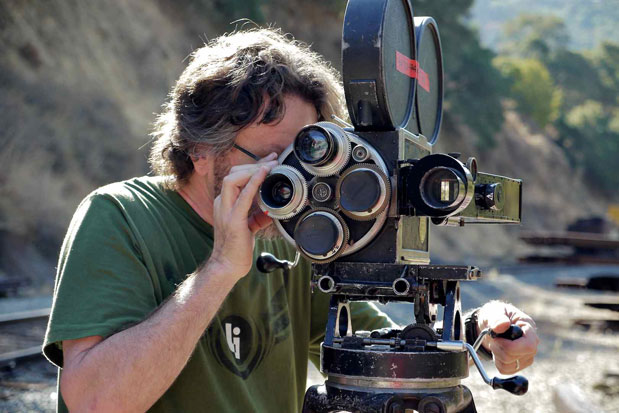 Focusing the lens through the prism finder. This is the only time anyone ever saw what the camera was really going to see.

I’d open the f-stop as wide as possible, for minimum depth of field, and set focus at a single point, where the primary action was to occur. These lenses aren’t designed to pull focus, and focusing the lens often meant rotating the entire lens barrel so I never knew where the focus marks were going to land anyway. Often they were obscured, with the marks facing the inside of the turret, so we tried to shoot with deep enough stops that the depth of field would carry.

Inside this prism the image was overlaid with two ground glass markings, one for full aperture and one for Academy aperture. Full aperture is meant for silent film production as the image fills the negative horizontally from perf to perf. Academy aperture came in with sound, and left room on one side of the frame for a soundtrack. The trick was to frame and align parallax for the proper markings. We always set up for full aperture, because that’s what they would have done back in the silent film days.

Focus took a little bit of time to set as the lenses were very pretty but very soft. Once that was done I’d dial in a rough f-stop on the lens, just on the off chance that I forgot to set it later (rare), and then look at parallax. I’d align the crosshair in the prism with a vertical object on the set at the same distance from the camera as the primary action would take place. Once I’d done that I would rotate the taking lens to the left side of the camera and push the camera to the right so that the taking lens was once again over the matte box rods but was now centered over the film gate and not the prism finder. I’d then align the side finder so that the cross hair was centered on the same object that I’d used to align the taking lens in focusing position.

After that I’d focus the side finder for the DP and get out of the way. 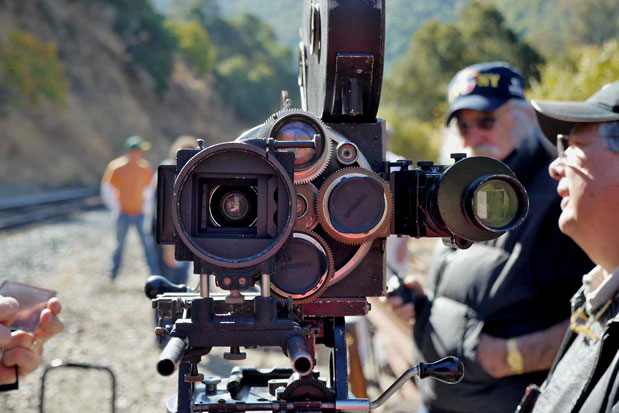 The lens in focus position. The taking lens has been rotated in the turret to sit over the prism finder, and the camera has been slid over so that the lens sits over the matte box rods. The matte box rods are built into the base, and the taking lens always sits over them when the camera is rolling. Racking the camera over them while aligning parallax made sure I saw what the film was going to see. 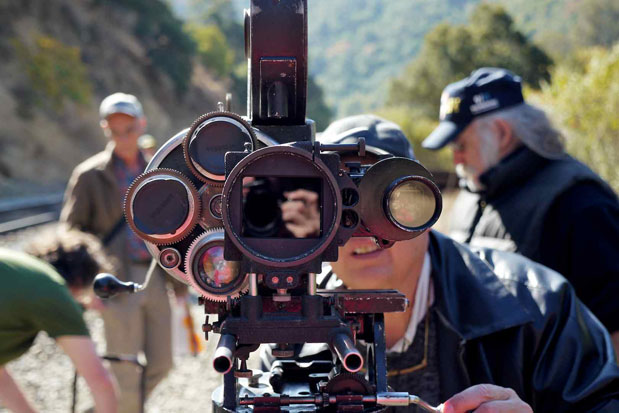 The lens in taking position. It’s been spun around on the turret so that when the camera is slid to the other side of the baseplate the lens is sitting in the same position it was when I saw through it with the prism, just over the matte box rods. In this position the lens and the side finder are as close as they’ll ever be, which is the time to set parallax for greatest accuracy. 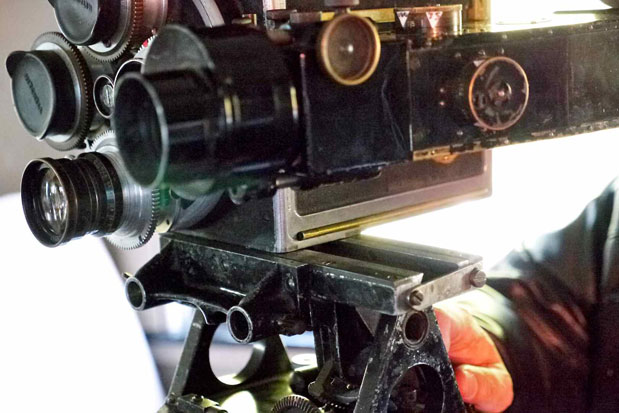 The sliding baseplate. A lever on the underside of the camera unlocked the camera and allowed it to side sideways.

I had to do this for every single setup. Sometimes I had to do it twice: if I wasn’t really careful setting the stop on the lens the lens barrel could move, shifting focus. (Some of the lens rings were a bit sticky from decades of use.) In that case I didn’t have to rack the camera from left to right the way I did to set the parallax; I’d just rotate the turret so the lens was in front of the prism, focus the lens, and then spin it back. Focus doesn’t care about parallax.

On top of that I had to make sure the lens wasn’t getting hit by sunlight and flaring, ensure that it was clear of all obstacles (sometimes the matte box filter tray might slide in front of the lens, something the cameraperson wasn’t able to see), make sure the f-stop was properly set, and check the lens and filter for dirt.

Once in a while I got something wrong: I’d forget to rotate the turret so that the taking lens was centered over the film, or have the camera in focus position instead of slid to taking position. Fortunately the camera operator and owner of the camera caught these couple of lapses, as did the director who is also a film historian. Both had shot a lot with this particular camera and knew its nuances very well.

Exposing film is tricky enough as you can’t see what you’re getting until its processed and you have to rely on experience and your meter to know what’s happening. Not being able to see through the lens during filming adds another interesting complication, and I found myself wondering how so many great silent films were made under such conditions. The bottom line is that if you do anything long enough, and you’re passionate about doing a good job, you’ll figure it out–and once you do you can spend your time creating instead of trying not to screw up. This is true of any crew position.

Many thanks to Adam Wilt, to whom these images belong. They are used with permission.