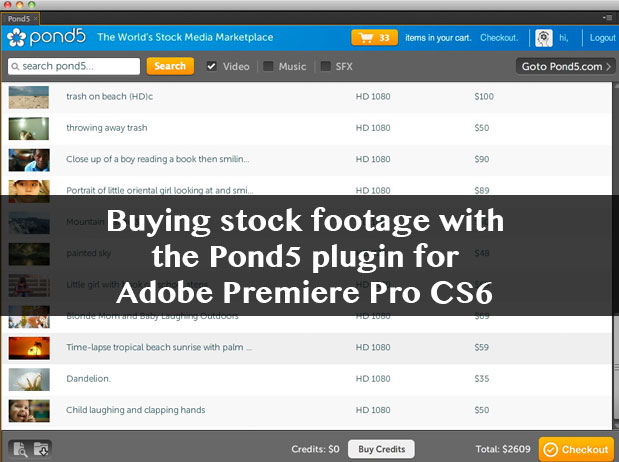 Back in 2012 the stock footage company Pond5 released a plugin for Adobe Premiere Pro CS6 that allowed from easy search and download of their stock footage right from within Premiere. We talked about this nice new feature back when the plugin came out. I used it several times when working on some stock footage based edits but hadn't had the opportunity to actually carry out the whole purchase and conform process from within PPro until a recent project. Keeping in mind this product is still in beta, here's a few cautions and gotchas that I ran across while working. May they save you some time in the future.

First off I'll say that I probably could have saved some time if I had really read the instructions closely before even attempting to use the Pond5 to Premiere Pro CS6 workflow. But if you look at the Pond5 Adobe plugin webpage there really isn't all that much instruction. There are a few FAQs at the bottom of the page but who really reads FAQs until you need to? Nor do you get any instruction when you download the plugin. 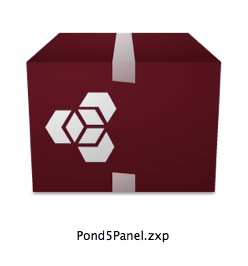 That actual extension is all that downloads, no ReadMe or anything.

I have to admit that Pond5 really snuck into this edit as a bit of a Trojan horse. There hadn't been any plan to get stock media from Pond5 but as I was several lacking in they type of footage I needed for the edit and since I was working in Premiere Pro CS6 it was the natural place to look since the plugin was installed right there under the Extensions menu.

I wish more developers would create Extensions for Premiere Pro CS6 as they can be nice to have right within the application.

What I thought would happen

When you bring up the Pond5 search window within PPro there's a little conform button at the bottom. Hover over the button and you get a little tool tip that seems to tell the story.

When I saw that my first thought was that I could just download low resolution, watermarked clips from Pond5 right in the PPro interface and when I was done I click the Conform button. It would then be a matter of signing up or signing in and the plugin would instruct me to purchase only the stock footage I had used in a particular timeline. I assumed that once I paid for the footage then the plugin would replace the old media with fresh, juicy, new unwatermarked hi-rez media. That's what I had hoped and you know what they say about making assumptions.

When I clicked the Conform button PPro sent out an XML but nothing really happened. Needless to say that didn't work so a look back at the Pond5 FAQs revealed this little bit of information it would have been good to know before I started the process:

Not the end of the world but it would have been nice to know that first.

Armed with this new knowledge I created my Pond5 account by clicking the Join button right in the PPro interface. I then took the time to identify all the shots in the timeline and search them out on Pond5 and add them to my shopping cart. After that was done I hit the Checkout button only to get this message: 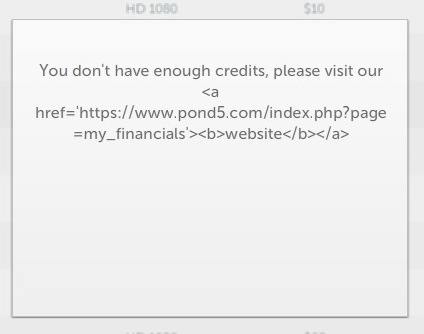 Uh oh … that didn't look good when it popped up.

Leaving the soap box discussion of having to buy credits at all for a footage purchase, this might have been some type of plug-in error that might be fixed in the future. I logged into the Pond5 website and thankfully all my clips were in the shopping cart on the web interface as well. I went to buy the credits (I'm guessing it's a 1:1 dollar to credit purchase) and realized that I now was spending double since the credit amount was just added to my total.

That's okay so what I needed to do was same my shopping cart. But I didn't see a way to save that shopping cart which meant I would have had to empty the cart, buy the credits and then manually load all the clips again. This would have been good to know before taking the time to search out all the media for purchase.

I was able to correspond with Pond5 via Twitter and they told me this is the way to do it:

@editblog Hi Scott, here's the process: 1) open a browser window, 2) sign into your pond5 account (or create one if you have not yet)…

@editblog …8) click “conform”, and your files should automatically be replaced with the full-res versions in your timeline.

They also said this about that 1:1 credit to dollar question:

@editblog buying site credit is 1:1 with USD, you're essentially pre-paying for media.

That's good to know but in the case of this type of project how was I supposed to know how many credits to purchase if I didn't know exactly which footage I used in the edit and how much it was going to cost? Is there some way to gauge that without loading all the media into a shopping cart?

Next up: The actual purchase and trying to conform the low-rez clips to hi-rez

And the actual purchase

After finally talking with Pond5 support on the phone we determined I would have to clear my shopping cart in order to buy the credits. In order to avoid having to manually search out every image via PPro I created a media collection on the Pond5 website and copy/pasted the clip numbers one by one into a search then saved that result in the collection. Not ideal but better than searching them out in PPro again.

Putting all my shopping cart images in a collection made it easier to buy them later.

Once I had purchased my credits I signed back into PPro any my credits were there. You can access your Pond5 collections in the PPro plugin so I had to one by one add all the clips to the shopping cart. After that I hit purchase and then went to the Purchased Items folder and hit download all. When I came back the next morning all the clips were downloaded.

What I hoped was that the next part of the process would be easy, and be the best thing about using the Pond5 plugin in PPro, the conform. As in the plugin would be able to automatically replace the low rez clips with the full rez versions.

The hope was this button could save me a lot of time. Alas, it did not.

When I hit Conform PPro began doing something and it appeared to do some kind of export but I got this error message:

I had other clips besides just the Pond5 stock footage in the timeline and come to find out I was missing two of the Pond5 hi rez clips. I wanted to go ahead and try so I hit Conform anyway. Then I got this:

Not once but twice.

After that I just decided to cut in the clips by hand. As I said above, and to be fair, this Pond5 Premiere Pro CS6 extension is in beta. But it's been in beta since summer 2012 so hopefully some kinks will get worked out as the idea behind this kind of functionality is great. So as cool and handy as the Pond5 plugin for Adobe Premiere Pro CS6 is just be aware of the workflow to use the darn thing so you don't end up wasting a lot of time like I did. I wonder if the stock footage purchase option built into Avid Media Composer's Marketplace works any better when it comes to replacing low-rez with hi-rez footage?