When faced with a slew of options, budget realities and performance desires, building a “perfect workstation” might seem like Mission Impossible. For busy professionals and passionate amateurs alike, assembling the ideal workstation can bog down into weeks of agony, finally ending up with a less than ideal and often expensive result.

Having spent over 25 years in the computing and creative fields, I’ve watched people consistently make a single fundamental error when buying a new computer. The typical process is – check the wallet, (maybe) pick a budget number, and “Let the shopping begin!”

If you’ve been using the same OS and software for years this may seem like unnecessary issue, but the best time to consider a change is when getting a new machine. That way your old box is around for migration and compatibility. And even if you plan to keep your software as is, understanding the hardware requirements of your software completely, both now and over the life of the system, is still the key to the perfect workstation.

Make a list of your software, in order of importance. Include likely upgrades over the life of the box. This can be challenging as companies keep new releases under wraps but sites like PVC, mailing lists and discussion forums etc. can be great sources of information (e.g. the forthcoming, likely 64-bit version of FCP), although you have to be careful to separate rumor from good insider information.

Next, add the key workstation component requirements to your application list: CPU, RAM, GPU, drives and monitor. Yes, your monitor. Monitor resolution and size is a critical speed component. Don’t believe me? Set your monitor resolution to the lowest possible (e.g. 640 X 480). Try to work in a complex project – but be warned, insanity may result.

Time spent scrolling, resizing, and rearranging windows and palettes wastes computing power. A high resolution monitor is fundamental to high performance – for workstations a 1920 X 1200 24″ or 27″ is a minimum monitor. A barebones Dell Precision T1500 workstation with dual 30″ Dell LCDs is faster in real-world use than a loaded Dell Precision vT7500 with a VGA display.

With your monitor already budgeted, it’s time to figure exactly what other components are needed in your perfect workstation. There are two aspects to this: first, figuring out which components matter for your programs; and second, how hard you will stress those components.

Applications can be CPU-, RAM- and/or GPU-bound, meaning that performance will flatten out based on that component alone.

Some examples: Final Cut Pro is primarily CPU-bound so adding more RAM and GPU won’t overcome a slow CPU. After Effects CS5 is primarily RAM-bound as the multi-threaded performance is tied to how much RAM per thread can be allocated. After Effects CS4 is more CPU-bound due 32-bit RAM limits and weaker multithreaded performance but in CS5, once you have enough RAM, it becomes-CPU bound again.

Premiere is CPU-bound and RAM-bound on many systems, although if you take advantage of the hardware acceleration with certain nVidia cards (e.g. Quadro 5000 in a Dell Precision T7500) it becomes GPU- and VRAM- (memory on GPU) bound. 3D applications like Lightwave are generally CPU-bound for modeling, but GPU-bound for previewing and CPU-bound for rendering.

However, your personal usage model may vary. It’s worth taking time to analyze exactly how components in your current setup are being used. Run both typical bread and butter tasks as well as the most brutal projects. Watch component usage using free tools found on Windows machines. Windows Task Manager is a good place to start for CPU and RAM usage. 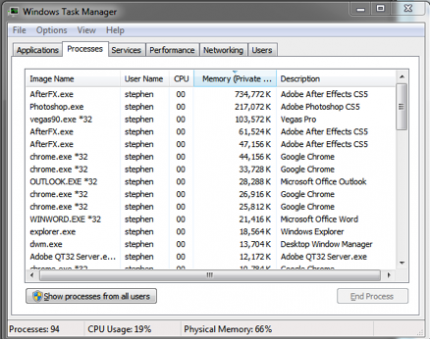 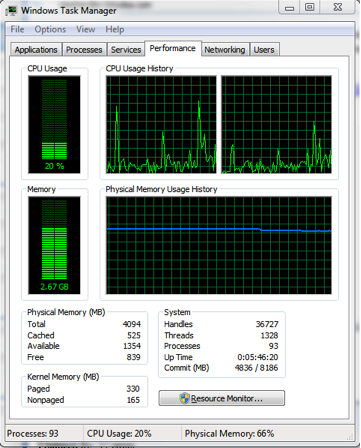 For detailed data and reports over a few hour or days, Performance Monitor is the tool of choice. Note that it measures individual hard drive usage. 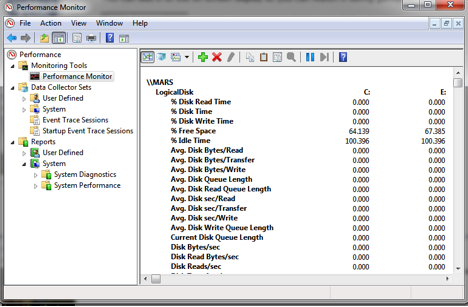 The hardest component to gather data on is the GPU. Check your graphic card applet for load percentage or temps (higher temps equal higher usage). Power users can purchase a dedicated app like AIDA64 which includes GPU load tracking.

Next, summarize the data on what components you stress. In my setup, the critical apps are Adobe After Effects (RAM, CPU, Disk), , Photoshop (CPU, RAM, Disk), Adobe Media Encoder ( CPU, Disk, RAM) and Illustrator (CPU, Disk). My perfect workstation needs to focus on CPU, RAM and Disk components while GPU can be a low-cost budget part. Of course, for other users GPU may be vital and other components less critical.

Armed with your research, you can now outline your perfect system in high level terms – in my case it would be “a high-speed, multi-core processor with plenty of RAM per processor core with a fast, NLE disk subsystem with a budget, OpenGL compatible GPU”. This could be achieved by a Dell Precision T7500, loaded with 6-core Xeons, gobs of RAM and RAID’ed disks – or with a mobile Precision 6500 maxed out on CPU, RAM and Disk – or perhaps multiple boxes, like two Dell Precision T3500’s. Figuring out exactly what configuration is going to achieve this leads up to Part Two of Building the Perfect Workstation, coming soon.