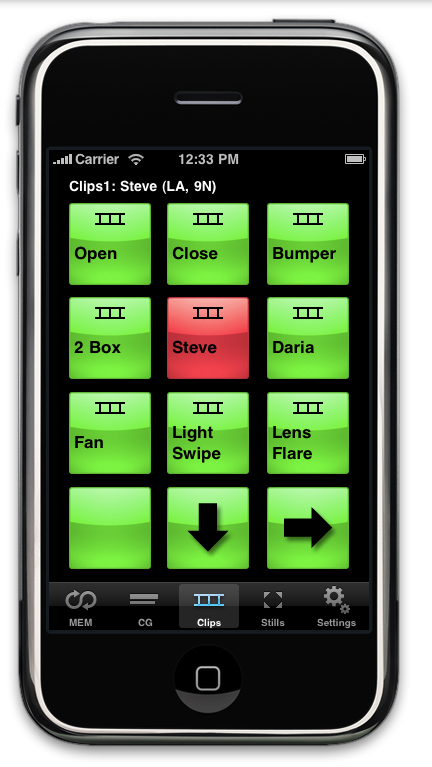 Need to control your Broadcast Pix™ Slate™ integrated live production system from your iPhone or iPod? Now there’s an app for that. Broadcast Pix is showcasing its new iPixPad application for Apple iPhone and iPod touch during the IBC2009 which runs Sept. 11-15 at the RAI Centre in Amsterdam (Stand 7.A15). iPixPad is expected to be available as a free download from the online Apple Store within a month.

“Broadcast Pix systems can be controlled from a physical control panel, from a soft panel in a web browser, and now from an iPhone or iPod,” said Ken Swanton, President of Broadcast Pix. “iPixPad is so easy to use that the talent can control a simple show from their iPhone.”

Each Slate system has its own IP address, so iPixPad can control a specific system. The iPixPad application replicates a Slate’s PixPad, the bank of 12 buttons on the Broadcast Pix control panel that allows the user to fire off macro memories, as well as select clips and graphics. Unlike macros on conventional switchers that only recall switcher moves, Broadcast Pix macros can also recall graphic and clip files, as well as camera positions. So an iPixPad can control a simple show with macros that select and position cameras and automatically add the appropriate title graphics and animations. The iPixPad can also be used to augment control of a larger production by providing an additional operator, or even the director, with a wireless controller that can be used to run macros or select graphics or clips.

About Broadcast Pix Broadcast Pix is the leader in integrated live video production systems. Its Slate systems create compelling live video far more cost effectively than conventional control rooms. Every Slate includes a switcher, multi-view, CG, clip and graphic stores, and aspect and format conversion. It streamlines production workflow, saves 70% on equipment, and uses staff much more efficiently. And Slate is future-proof, as it is upgradeable to 3G 1080p. Broadcast Pix is based in Massachusetts, with distributors worldwide. Customers include leading broadcast, webcast, podcast, cable, entertainment, mobile, corporate, education, religious, and government studios in over 70 countries. For more information, go to www.broadcastpix.com.