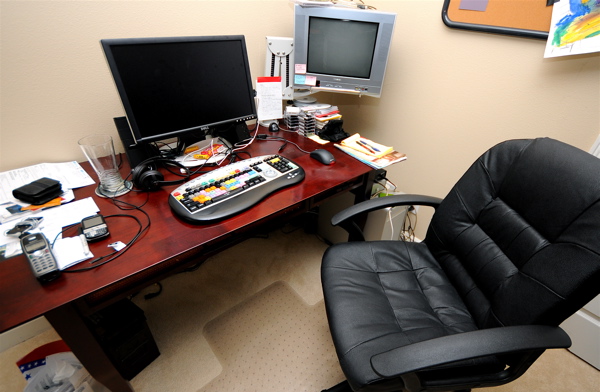 Bella editing keyboards include printed NLE shortcuts in addition to the normal key symbols. Some models include a jog wheel and customizable user keys. I’ve been editing on a daily basis with my Bella Shuttle FCP keyboard for about 3.5 years now. Apparently that is long enough to wear off the left COMMAND, A, and S key labels (I think we’re in danger of losing the T key in the next 6 months). Mine is the 5102 DV Keyboard model. MSRP is a little over $100. The keyboard was initially very helpful for me to learn and recall Final Cut Pro keyboard shortcuts quickly, and it’s been in constant daily use for my writing at FreshDV and PVC. Here’s a quick review.

Keys and Feel
My key labels have held up rather well, considering they get used on a daily basis. As I’ve mentioned, the “A” and “S” keys are already worn off. The left COMMAND key symbol wore off perhaps a year ago (clearly, I hit that key a lot). I’ve used Editor’s Keys keyboard labels in the past, and they don’t last as long as a real keyboard label like the kind Bella offers. Key action is somewhat loud, and not as smooth as Apple keyboards. This could be improved, in my opinion. I personally prefer the smooth, silent action of a notebook keyboard. I don’t use the jog/shuttle controls as much as I initially thought I would, but they do come in handy. The jog control does have a nice, smooth feel that makes me want to use it more. Surprisingly, it’s nearly always faster to use J/K/L for quickly shuttling through footage and marking in/out points.

Software
The DV Keyboard comes with drivers and a control app. On the Mac this is called JSM Settings. There is a Windows version that runs in the system tray. The application allows you to program the keyboard’s custom keys, and configure Jog wheel behavior. I’ve not used the Windows version, but found the Mac app to be sufficient in configuring the keyboard. It’s a little confusing at first, but thankfully when you jog or shuttle the hardware, you’ll see what you are doing reflected in a diagram of the hardware controls. This allows you to figure out very quickly how you can best configure the hardware behavior. For instance, you have seven discrete positions available for the shuttle controller. Each can be configured to execute a specific key or mouse command, should you need that level of granularity. There’s also an option to configure a specific command when proceeding from Shuttle 3 to Shuttle 4, for instance. Again, very fine grained controls available to ramp up or down specific commands and controls. Thankfully, the latest version of the application now includes the option to setup profiles for specific applications. FCP Express, Avid Media Composer, Premiere Pro, etc. This is a welcome addition for editors that use multiple NLEs. 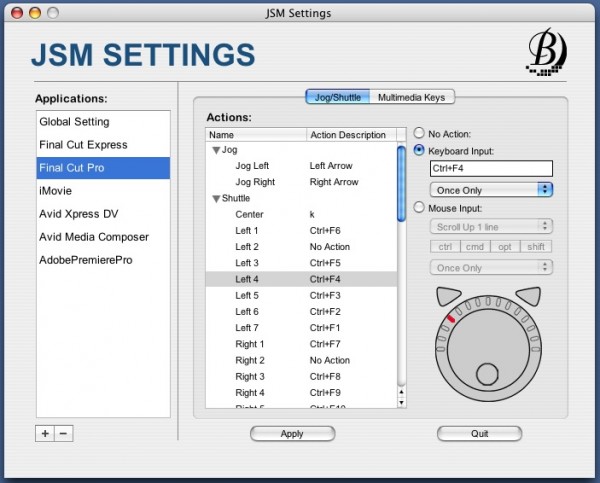 Quality and Reliability
This keyboard has consistently performed for me for years, with no real downtime. However, since day one my “8” key has stuck down on occasion, as well as the “4” key on the numpad. Both just need a hard strike to fix. Also for the past year the keyboard will occasionall lock up and stop working as if it was unplugged. Disconnecting/reconnecting the USB cable fixes this immediately. It does this infrequently, just enough to be a minor irritation. I have intended to send it in for warranty repair for months now, but use it daily and don’t want downtime. Also, there’s that procrastination thing…

Summary
This keyboard has sped up my learning process, and indeed speeds up editing. Even with my minor complaints, I’ve been pleased with the overall performance and would buy Bella again in the future.