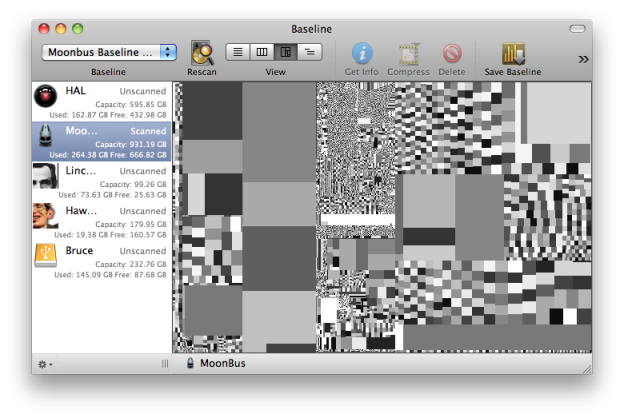 As editors and media content creators we can often accumulate tons of large video and audio files as well as hundreds of thousands of tiny little (and sometimes not so tiny and little) supporting files. Be they QuickTime movies, graphics, audio files, render files, edit project files, autosaves … the list is pretty much endless. What if there was a way to visually look at all of the files on a hard disk and get a big picture overview of all those files on the disk. There is, it’s called Baseline. And while it’s far from perfect it’s a nice start. 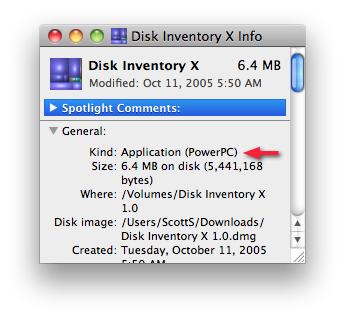 While it will run on Intel Macs and Snow Leopard it requires PowerPC emulation software to be installed on the Snow Leopard operating system. This software isn’t installed by default and while it’s a minor install (and the OS can reach out to the Internet and install it if need be) applications that are still PowerPC only applications suffer a performance disadvantage. Plus, it’s old technology. Software developers need to (at the very least) update their software to be more compatible with native Intel processors in today’s Macintosh computers. [Here’s looking at you Magic Bullet / Red Giant Software installers!]

Enter Baseline from Mildmannered Industries. It’s a piece of software very similar to Disk Inventory X and while it’s not an entirely Intel-native application it is Universal. The app isn’t perfect, it’s still a bit buggy and some of the features don’t work right but it’s a very solid start so I hope the developers will keep working with this application and get it working perfectly as it should be a tool in every Mac-based editor’s toolbox.

Treemap: The handiest hard drive view you will ever see

The single thing that makes Baseline a very cool tool is the graphical “treemap” view: 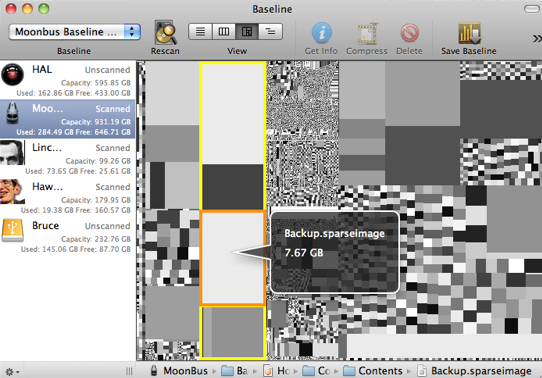 The concept is simple. The bigger the square the bigger the file. Hover your pointer over a square and see the file name and file size. This view is one of the most powerful ways I’ve found to easily manage a media drive. If the developers can work out the kinks in the view then it will be even better. One of the features of Baseline is QuickLook support. It would make sense that you could select a file on the treemap view and hit the spacebar to preview via QuickLook but it doesn’t work. There is also a Reveal in Finder command via command+R or you can customize the toolbar to add the Reveal in Finder button at the top of the window. The only way to reveal that large file you are hovering over is to keep double clicking into the treemap until that is the only file in the window. Then you can reveal it in the Finder and check it, QuickLook it or delete the file. There is a Delete button in the toolbar but that doesn’t work in the treemap mode. The clicking into the file in treemap is quite a waste of time as with each double-click in the orientation of the blocks can change making you hunt for the file you were clicking into. What would be nice is if the developers added contextual right+clicking to files in the treemap view. Then you could just right+click on a file to perform any number of operations. The other anomaly I saw in treemap view was the app would sometimes reflect different sizes to a file. It looks like it has something to do with the orange selection outlines vs. the yellow ones. An update or explanation of this feature is needed as well.

Baseline has other views besides treemap. List view and Column view are just like list and column views in the Macintosh Finder. Show duplicate items attempts to do just that, show duplicate item. I say attempts as it looks like it is showing duplicate files that while they are similar aren’t exact duplicates:

Their duplication criteria might require some explanation. The help file says “Baseline searches for duplicates based on the exact contents of each file. The filenames are ignored.” But if I had deleted the single_barrell_tonemapped.tif or the -4.tif then the different applications that use each of the files (though the image was the same) would have had a missing file when I tried to open that particular project. Locating duplicate files probably isn’t easy so if nothing else the Baseline duplicate file location can let you manually check the results and remove what you know is a duplicate.

The other really powerful feature is the ability to save a baseline of a drive scan and then compare that to a later scan. With this feature you can see exactly what has changed with both the addition and the deletion of files. Click the Changed tab and you get a detail of what has been added or deleted (under the Difference column) since the baseline was saved:

The ability to save multiple baselines means you can save a snapshot history of a drive to compare into the future. When in the list and column view Baseline also shows invisible files which can get confusing so it would be nice to have an option to hide those files as well.

So is Baseline worth the current price of $20? Yes and no. I had several crashes while testing the application out. The currently limited functionality of the treemap view really shows the potential for development that hasn’t been reached just yet. But if you have a need to save multiple baseline snapshots of a drive then $20 might well be worth it. There is a 14 day demo. After that 14 days “Baseline will no longer display the comparisons against saved Baselines, but all other functionality will remain intact.” That’s still a lot of functionality. But one reason to support a small app like this is that buying the program will help keep the developers developing it! I point out it’s current problems in this article not to trash the application but to encourage the developers to keep working on Baseline; fix the bugs and add the functionality. With a few more revisions this could be the killer disk management application. As editors we need clear and easy ways to manage all of the hard drives we have these days. Baseline could be it.