It looked fast and futuristc. At least in demo form that is.

Yesterday I sat through Avid’s web-based editing demo. I wasn’t sure what to expect as the idea of editing video over the web sounds painful. Adobe Premiere Express tried web-based editing once and it wasn’t pretty when I tired it out. But bandwidth is faster and it looks like Avid is serious about making it work.

The idea was this: There was a server based in Virginia that was serving the DNxHD36 media, transcoding it to something usable, in realtime, to the Avid booth in Las Vegas at NAB. When the demo editor went to load up clips or a timeline the media would stream into the playback window and a progress bar would fill up as the clip streamed in. I believe he said they were working with a 1500 megabit connection but it should be able to scale to the bandwidth available. Two streams were actually coming in so at any point he could click to an unbuffered frame and that frame would be served immediately. Editing was up and running very quickly. 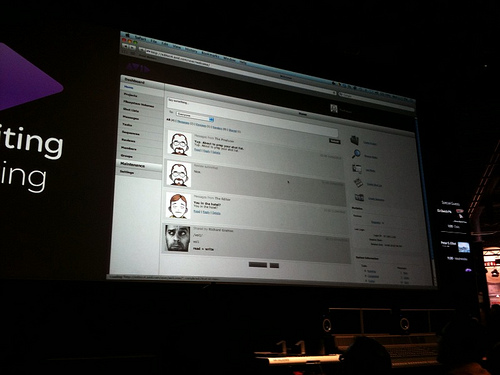 Above is the dashboard where editors and commentors can check in on an edit and leave notes and messages for all involved. There’s two different editing interfaces. This image below is the “shot list editor:” 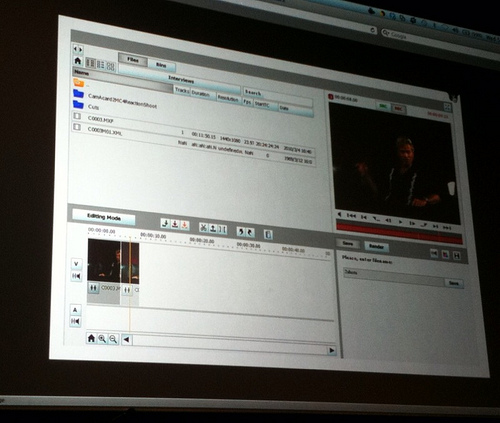 That’s a simple Flash-based editor that can be used to just string out cuts into a simple edit. This limited functionality would be great to give to the producer or director to get a rough idea of their story … and not offer them the ability to do very much. The more impressive interface for real work is the “craft editor:” 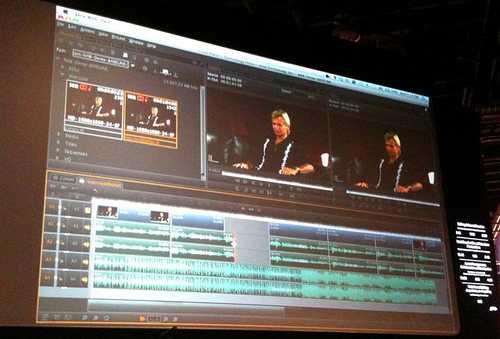 This is a Java-based interface and looks much more like an interface that editors will know. It’s timeline based and there’s the ability to insert and overwrite (with Avid’s familiar red and yellow arrows showing the way), shuffle clips, add video and audio tracks, transitions and do many of the basic things you need to do in an editing application. There’s even a keyboard editor with presets for Final Cut Pro and Adobe Premiere. There’s direct manipulation of things like applied transitions icons and keyframing of effects with a keyframe editor timeline. I even saw familiar looking Avid trim roller icons.

Computing of effects is done on the server but once the editor renders a section of the timeline the server no longer has to compute that. Resolution can be changed to compensate for bandwidth. Once complete the edit can be sent for review and approval. In the demo there was an export to iPhone and iPad option and in the image below you can see an iPhone simulator showing the review: 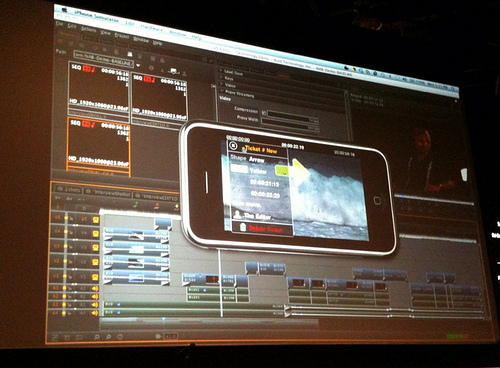 The reviewer can annotate the clip with arrows and notes and they return frame-accurately to the edit for changes. The review and approval uses a “ticket” metaphor so once a change is done the editor can close the ticket to let everyone involved know the changes are done. In the end lists can be exported (including FCP XML) for final finishing.

It was a very cool demo (as demos often are) and certainly a place where the NLE manufacturers will all be going as web bandwidth gets better and filmmaking collaborators move further and further apart. There was no mention of when this might ship. This technology was apparently acquired by Avid but it has been updated as a lot of the interface looked very Avid-like. The other really big question that I had upon leaving the demo … how much might something like this might cost? The software might be free but that storage and bandwidth costs something.