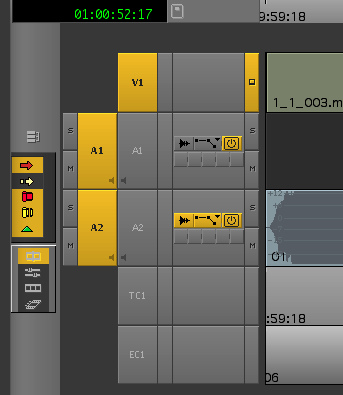 See that image above? That’s some crazy new timeline stuff that might be happening in the new version of Avid Media Composer. Avid has kicked off NAB 2010 with some really big news for editors. They held a press event today (Sunday) to announce Media Composer 5. Unfortunately I was on the airplane flying in at the time and missed it but the news is good.

Oh, and Avid has also entered into an agreement with Euphonix to buy them.

Following are the high points from the Avid website about Media Composer 5. It’s text only at the site right now but I hope they will be putting up some images soon as I really want to see what some of this stuff looks like, the “dragging and dropping” thing most of all. Is it a tool of some sort or a different mode kind of like the Avid DS has? We’ll see tomorrow. The bullet points:

Monitor video externally with support for the Matrox MXO2 Mini

Mix and match frame sizes and aspect ratios – in addition to formats, frame rates, and resolutions – in the same timeline

The new AMA support is very welcome as that is certainly something that new editors don’t always grasp, the fact that Avid has to copy all media into a compliant omf or mxf file and place it in its own folder structure. That’s part of what makes Avid media management so damn good. We’ll see how it works with this new support. Better AMA support was something I was complaining about a while back, at least asking why Avid didn’t support DNxHD Quicktimes at the least. It knows where all its media is at all times. But working quickly with the many flavors of .mov files in the world is important too. It looks like Avid hasn’t just added ProRes or Canon H.264s but they say that anything the Quicktime player will play MC 5 can work with. That’s really taking the support to the max.

The other big change is this new “drag and drop” timeline. I think this basically means that you can do direct moving and manipulation of clips without entering Segment mode. It also (I think) means you can trim clips directly by clicking and dragging edit points and heads and tails. Now of course you’ll still want to use Avid’s Trim mode most of the time as that’s really one of the things that makes Media Composer an Avid but this option to do both is nice as I think the more options the better. Plus, it’s almost guaranteed to help bring some new **ahem** FCP users into the fold.

All the info is up on Avid’s site.

The other big Avid news was that they have entered into an agreement to buy Euphonix. Many people have recently come to know Euphonix when they started shipping their MC Color control surface for Apple Color. They have also made hardware audio interfaces and transport controls for years. Avid says they will still support the EuCon protocol which allows the Euphonix hardware to all talk to each other and do wonderful things. I wonder if that could move into Avid products as well. I think this Euphonix news was quite the surprise. I’ve worked in many Avid D|S rooms over the years that has their own dedicated hardware controller (though I didn’t see a lot of editors using it) so this type of thing isn’t new to Avid. At the rate that Avid has been going we might see something sooner rather than later. The new finishing support that is now in Media Composer 5 might mean that MC Color control surface could find a new home! I bet that would makes a lot of those Avid only post houses very happy.

NAB has just begun. There will be a lot more news as the weeks moves on.