I recently pointed out three plug-in tools for performing “Ken Burns” style pan and zoom effects on still images in Final Cut Pro. Avid Media Composer has options for doing the same thing. While there aren’t as many options (and one of them is the same as Final Cut Pro) there is one that is part of the software package.

The plug-in tool that is available for both Avid Media Composer and Final Cut Pro is the great and easy to use (though somewhat expensive) MovingPicture from Stagetools. MovingPicture can run anywhere from $199 for the basic version to $268 for the addition of rotation. It’s very simple, very intuitive for setting up a move and can be used very quickly. It can earn its cost on the right job.

But Avid Media Composer also has a tool already included in the package for just such a task … and many people don’t know it’s there. It’s located under the Image category of the Effects Palette and is called (simply enough) Avid Pan & Zoom: 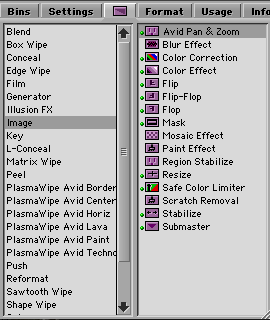 To use the Avid Pan & Zoom tool you first apply the effect to a clip and open the Effect Editor. You then click the box in the upper right corner to load your high resolution still image you want to pan around. All the parameters are then tweaked in the Effect Editor:

Once loaded tool operates somewhat like the FCP plug-in from Noise Industries. There’s size and position sliders for setting the zoom on an image and it’s position. You can elect to view the magnified image in the Record monitor or view a bounding box: 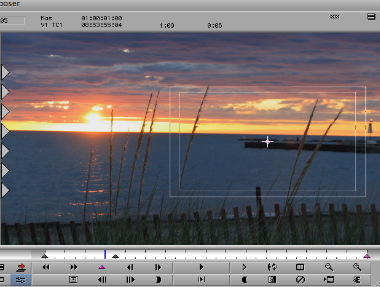 Then it’s a matter of setting keyframes, choosing your eases and the desired rendering mode. I won’t run through a full tutorial on how to use the Avid Pan & Zoom tool as that has already been done very well over at Genius DV. Just remember to set your Display to Target when you are happy with your move and you are ready to render.

Are there other plug-in Pan and Zoom tools for Avid? If so then please leave a note in the comments below.