Avid held their press event on Sunday evening of NAB at the beautiful Aria hotel. The stage was decked out in Avid purple and we heard from several Avid executives including CEO Gary Greenfield. While there weren’t many big announcements that really fit into the world we cover here at the Editblog they did announce a limited time cross-grade promotion to move from Final Cut Pro to Media Composer.

We have seen the release of Media Composer 5.5 just over a month ago and that’s one product that Avid is showcasing at this year’s NAB. But the announcement of the cross-grade promotion for Final Cut Pro users was a bit of a surprise. It seems like a particularly timely moving considering we should be seeing a preview of the next FCP at Tuesday’s SuperMeet.

Here’s a photo of the slide that was showing for this cross-grade promotion: 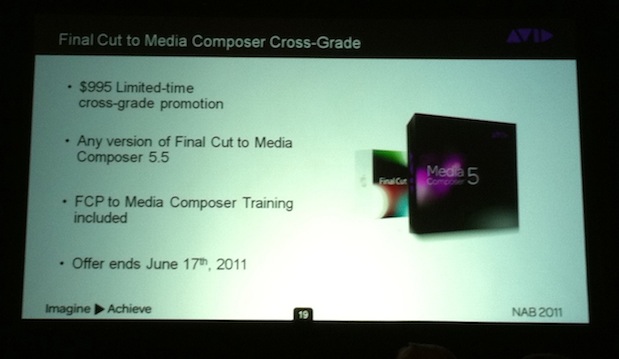 That’s $995, running until mid-June. It’s definitely worth noting the training that is part of the package. Please check out some of our Avid Media Composer basis for the Final Cut Pro Editor if you decide to do the cross-grade.

Avid also announced that they are bringing the EUCON control protocol to Windows. That means the Artist Color series control surface (formerly the Euphonix MC Color) will come to windows as well as all the other control surfaces including the Artist Mix, Control and Transport.

Avid also announced updates to their ISIS shared-storage platform which they are gearing more toward the small to mid-size content creation market. There’s a new platform called InGame that’s a sports solution for “teams, leagues and stadiums.” Pretty interesting if you’re into that market. They also showed the new Interplay Central. Interplay Central looks to be the first implementation of the web browser-based editing product they demoed last year at NAB. 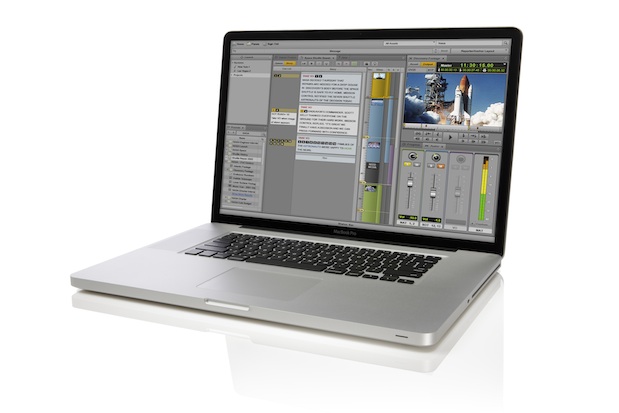 I’m not sure how exactly that fits into our post-production only world at this point but you can read about it at Avid’s website as well as get more details of all their NAB 2011 announcements.