The Avid press event of NAB2013 was on Sunday night of NAB was an interesting one. There’s a ton of new products being introduced including lots of Interplay updates and additions, a big updated for ProTools (that felt like the biggest ever after watching the video) and … Media Composer 7. They didn’t spend a lot of time on MC7 but rather played a video that flashed up several new features. It seemed a bit underwhelming at first but after talking with some Avid folks after the event I think there’s going to be a lot for editors to like in Avid Media Composer 7. I updated this post on Monday morning with a few corrections.

I don’t have any screenshots as many of these features are still being designed. And I may not get all the details exactly right (Avid folks feel free to comment below to correct me) as I was trying to take notes on my iPhone during these discussions. But here it goes … 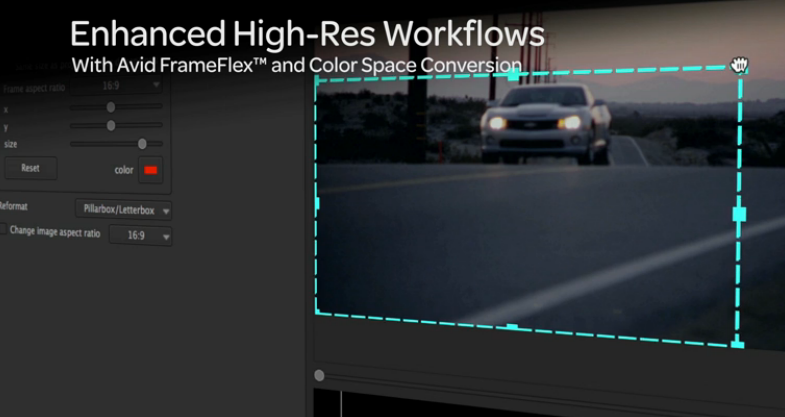 Avid Media Composer 7 will not be fully resolution independent, as in being able to create and work in a 4K or 5K product. What it will have is Frame Flex . The best was I heard it described was as “pan and zoom for video media.” You’ll still be working in 720 or 1080 but you’ll be able to have access to the full higher-than-HD resolution for reframing and, I’m guessing keyframes pan and zooming of the image.

I’m sure many will see this as a big fail since all the competitors can do full 2K+. I thought about it for quite a while and while “future proofing” by finishing at 4K is nice the reality is most people still don’t need to finish that way. And you sure don’t need to do your creative edit that way though Apple and Adobe would tell you different.

Avid Media Composer will get to full resolution independent products but until then Flex Frame will be what we have to use and for the large majority of programs it’ll be a good solution.

Also, AMA QuickTime links will now support Alpha channels which will appear as a Matte Key.

The best part is all consolidating and transcoding will now happen in the background so you can work as transcoding takes place. Transcoding is actually a totally separate process so Avid Media Composer 7 won’t even have to be running to transcode (but will still need to be installed).

Imagine you taking a shuttle drive and designating a Dynamic Media Folder on that drive. Then you could (I think) give that to a DIT with MC7 installed and they could use that watch folder to manage and transcode the media. You get that drive back, plug it in and you’re instantly editing with that media. At least I hope that’s how it will work.

• Avid Media Access clips will no longer be “second class citizens” to Avid-managed .mxf media and will have the same media management advantages. They’ll even appear in the Media Tool.

• AMA media will now get their own unique color in a timeline for easier identification.

• You’ll be able to relink to video only when relinking to AMA media,

• You’ll be able to drag and drop from the computer’s OS level and by holding down the OPTION key MC7 will then AMA link that media instead of doing an import.

• Best of all you’ll apparently be able to do a sequence transcode and ONLY TRANSCODE AMA LINKED clips. That’s going to be very nice. 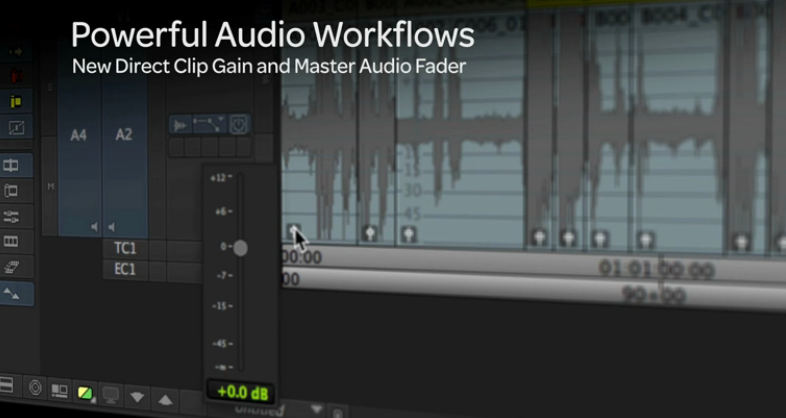 Audio waveforms have been completely rewritten so they’ll be much faster to draw, redraw and just have turn on overall. I’ll have to see it be believe it but I hope to see it very soon!

A Master Audio Fader will allow for audio adjustments and effects of the overall audio mix and not just per track. I’m guessing there will now be a new fader in the mixer?

And the Avid Audio Mixer has been fixed so it’s adjustable like it should be.

Audio clips in the timeline will now all have clip-based clip gain built in for easy adjustments of clip levels right in the timeline. No more having to add a single audio keyframe to do that with rubber banding (that is if you didn’t want to use the mixer). Apparently this comes from ProTools.

Avid Media Composer 7 will support but the use and creation of Look Up Tables. MC 7 will ship with a variety of LUTs.

AS-11 and new spanned markers in the timecode track

The addition of AS–11 support (to go along with AS-o2) has added the ability to place markers in a sequence timecode track than can now have extended durations. These won’t be able to ripple and move when insert editing but I could see some use for them. I expect these “spanned markers” will get expanded into just a useful editing tool.

Support for Sony’s F5 and F55 with XAVC codec support.

New price and on more Symphony as a stand-alone product

Avid Media Composer 7 should ship at some point this summer. Give a read to their press release and see what they have to say. And watch the video to see what we saw.

There are also going to be tons of bug features and no doubt some other smaller features we didn’t talk about so we’ll just have to wait and see exactly what it’s like when it ships. And how much of what I described above isn’t exactly right or is way better than I described.