Recently here on PVC, Woody Woodhall discussed The CALM ACT (Commercial Advertisement Loudness Mitigation), asking “Why Is The US Congress Messing With My Mix?”. It's a nice introduction with several wrinkles worthy of further consideration, even if most of us don't use specialized audio tools like the Dolby Media Meter and are now uneffected by broadcast volume standards.

Many of us using more mass market tools will want to follow along with these first steps — and can — thanks to TC Electronic (see their loudness authority), whose LoudnessRadar was bundled with Adobe Premiere Pro CC and Adobe Audition CC. 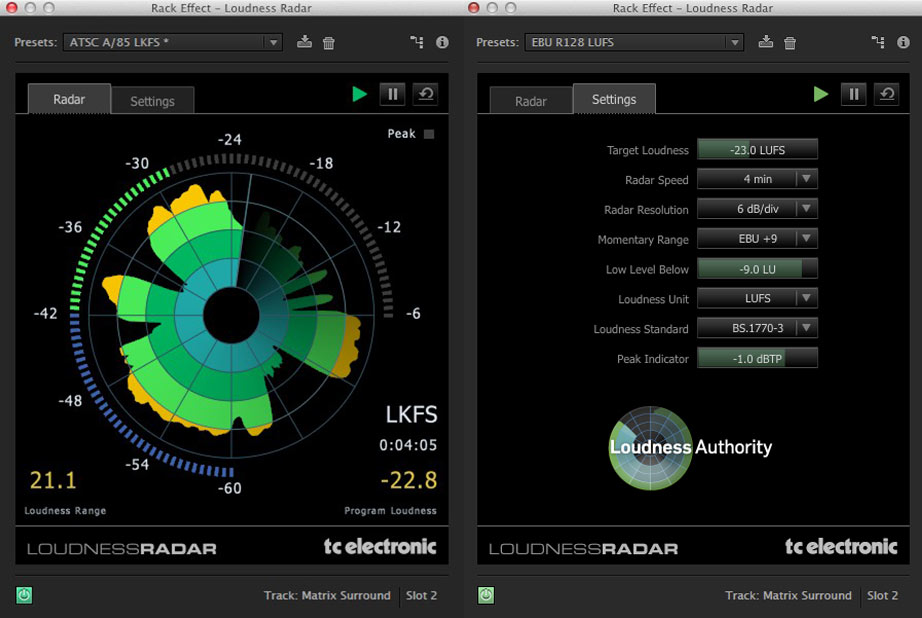 Matthew Jeppson mentioned the loudness wars several years ago here on PVC in Audio Peak vs Average Levels: How our ears perceive loudness. Here's his example, from Matt Mayfield, and another of many discussions of over-compression:

Additional background on world volume standards, perceived loudness, peak normalization, loudness normalization, and so forth are discussed by Florian Camerer in EBU R128 Introduction.  As noted by the Audition team, “In order to harmonize the world, ITU 1770-2 incorporated the gating mechanism from EBU R-128, and EBU adjusted the threshold in their recommendation to match that of ITU.” (Note also, an alternative EBU presentation here).

There are also a few tutorials on TC Electronic LoudnessRadar bundled with Premiere Pro CC and Audition CC. Here's an intro from the creators, and from Maxim Jago in Audition CC tutorial: Analyzing level with the Loudness Radar Meter. Paul Schmutzler also explores the Loudness Radar Meter for matching and adhering to broadcast volume standards in Sound Removal, Auto-Speech Alignment for ADR, and More in Adobe Audition CC. Larry Jordan also has a tutorial for his subscribers, and there's basic instructions in an excerpt to Adobe Audition CC Classroom in a Book.

Note that you can also use the effect on the Master track in Premiere, and use the presets in the Match Volume batch exporter in Audition CC, which is located in a tab next to the Effects Rack and Diagnostics panel.


On a side note: …a NonLinearEditor's Blog has a “quick review of a nice little firewire audio interface and stereo monitor control,” the sleek t.c. electronic desktop konnekt 6.
Support ProVideo Coalition
Shop with