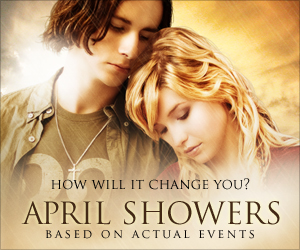 I was looking at some of the films coming to our local film festival, the Nashville Film Festival, (which I won’t be attending much since they scheduled most of it the same week as NAB!) and I came across a film screening this Saturday called April Showers. It’s not a light little comedy but rather a drama about a Columbine-like school shooting. The synopsis from the film’s website:

From writer/director, Andrew Robinson, a survivor of the Columbine High School tragedy, comes April Showers a dramatized retelling of what it was like to be a survivor in the midst of the nation’s largest school shootings. Based largely on actual events, April Showers follows the story of Sean Ryan (Kelly Blatz, Prom Night) as he and fellow survivors attempt to make sense of the horrors they’ve just witnessed and, for Sean, coping with the loss of his friend April (Ellen Woglom, Viva Laughlin).

Besides looking like an important film with very topical subject matter, one other thing that makes this movie worth a blog post are many of the resources available on the film’s official website.

First I have to be honest and admit that one thing that intrigued me about the movie was the fact that it features Tom Arnold in a dramatic role. I don’t know why but I’ve always liked him in that capacity.

But more than that the website is chronicling the film’s MPAA rating of R – restricted. There has been a long standing debate on the MPAA, their secrecy and their ratings practices. The ratings board has received a lot of criticism over the years about what seems to be their soft on violence but hard on sex and nudity approach to film ratings. Movies stuck with an NC-17 (and often an R) rating often have less chance at the box office as it limits the audience who can see the movie, in the case of an R rating, and the theaters that will carry it, in the case of NC-17. There’s even a great documentary about the subject called This Film Is Not Yet Rated that is an “expos© about the American movie ratings board.”

Andrew Robinson, the film’s writer and director, has described why he chose to make this movie about such sensitive subject matter as the Columbine shootings. Being a survivor of that day he certainly has a unique perspective on the event. He has said that, among other things, he wants the film to “open a dialog among teens and adults alike about any of the issues touched upon in the film.” Ultimately, that’s what any good film should do; spark discussion and possibly drive someone to action. With that in mind, it would make sense that a film like April Showers should be seen by as many people as possible, especially teens in high school as they are affected by the film’s subject matter more than anyone else. Hence the director’s outrage that the movie received an R rating from the MPAA. In an instant that rating limited the audience. Not so much in that it will keep teens from seeing the movie in the theater (which it will) but it will limit how teachers and educators could show the film to students since many schools have strict policies against showing R-rated films. And I would guess that even for teachers to encourage their students to go to the theater to see an R-rated film is a slippery slope that many will not want to venture down.

This R-rating and the filmmakers’ response to that R-rating has been very well documented on the April Showers website.

The fun began when the film received its R rating. In a post on the film’s official website Andrew talks about receiving the news as well as the MPAAs reasons behind the R rating. I won’t spoil the fun by outlining the reasons here so click over and you can also see a nice comparison between April Shower’s shots and something similar from Pearl Harbor. To add insult to injury, the April Showers trailer was later branded as a red band or R-rated trailer meaning that it can only play in front of R-rated audiences. In another post the director talks about this issue with the trailer, the MPAA’s reasoning for the decision and comparisons to other trailers. He even links to the actual letter from the MPAA and their reason for the rating: “SOME DISTURBING VIOLENT CONTENT.”

It’s not often that we get to see this kind of detail between a filmmaker and the MPAA. The film’s director has done a great job of using their well-designed website lay out his case in a public forum for what he believes is the wrong decision from the ratings board. There’s open letters from the director as well as others who don’t think the MPAA made the right decision. There’s two very heart-felt letters, one from the director appealing for parents to take their kids to the film as well as a letter from the principal where the film was shot, discussing the R-rating and how it misses the point of what the film really is about.

In addition to the discussion of the film’s rating, there is a podcast available with a number of participants (including the editor) from the film. Between these interviews, many of the posted news articles and the discussions and stories that have been (and are being) shared on the April Showers website, it’s a great example of the value that a website can add to a motion picture. 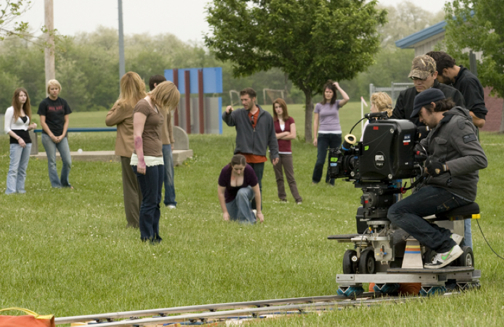 There’s some good technical talk for those of us who are into that sort of thing as well. You can see a comparison between 3 frames of footage and the different stages of color grading at A Filmmakers Guide to Why You Need to Calibrate Your HDTV Now. The director mentions shooting April Showers at 4K so I immediately assumed RED but when I clicked over to his bio page there’s a picture of him holding the behemoth that is the Dalsa Origin camera. There’s a number of good production stills that show the camera at work as well as a behind the scenes video where you can just get a glimpse of the Dalsa being handheld. That’s a big camera. They’ve also posted a raw, un-color corrected clip of the Dalsa footage before it was graded. Compare that to the theatrical trailer and you can see a good example of before / after when it comes to color grading a feature film.

Thanks to director Andrew Robinson and the creators of April Showers for the wealth of information that they have placed on the film’s official website. This type of content is great for aspiring filmmakers and movie junkies alike. It makes it all the better when the movie has an important subject like that of April Showers. I wish them much success with their film. The showtimes are updated on the site so support the film if you can.