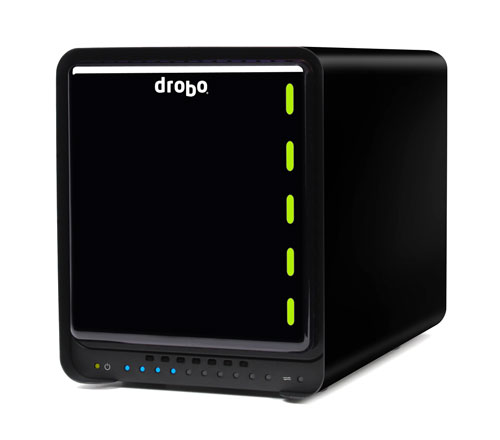 I take no pleasure in having to write this, Drobo as a company have always been very good to me, their support has been great and I have never lost any data from their machines. I have however experienced a series of hardware and software issues that have now spanned several years and multiple Drobo models. My experience this past weekend with a new Drobo S, sent to me to as a replacement for a problematic 2nd Gen Drobo, have led me to the end of the road and it is now time to find another route.

When Drobos first hit the market about five years ago they were the darling of the professional creatives. Prominent photographers sang their praises everywhere you looked and it sounded like a perfect solution. Gone was the tangle of cables and external drives on my desk, in exchange for a simple little black box that promised the ultimate in user friendly experiences. Over the last few years though, one by one those prominent photographers who so publicly sang the praises of Drobo from the beginning, began to sing a different tune. Some photographers like Scott Kelby very publicly announced their intentions to move away from Drobos in the hope that others would have fair warning of the potential pitfalls. Now it is time for me to do the same thing and I want to share my experiences.

I won't go into the technical details of how a Drobo works, if you aren't familiar with it as a product then take a look at their site where they have numerous videos to get you started. The basic idea behind it though is that Drobo takes the headache out of data management, allowing you to simply slot in drives of any size or manufacturer to expand your storage. When one is full, or if one dies, simply pop it out and slot another one in. Drobo manages the data redundantly and automatically spreads the data around your drives to make sure you don't loose anything in the event of a failure. It's a clever system but it seems to be too complicated for its own good as I have been plagued with hardware and software issues since the beginning.

On my second generation Drobo, if you mounted another drive to the system while the Drobo was being accessed then it would cause the Drobo to re-boot. If you were in the middle of a file transfer then this was incredibly frustrating. In my first support case with that particular issue I was told that I probably should not use the daisy chain firewire connection on the back of the unit. How can that be a solution offered by a company I thought to myself? In fact it didn't solve the problem though and 3 years later I was still having the same problem even on a different Drobo so it was not specific to one particular machine. A problem that I had reported multiple times , a problem that causes your Drobo to re-boot midway through a file transfer had not been rectified. Compounding this issue were multiple other instances where all of the drive lights would suddenly turn red during start up necessitating multiple re-boots.

Then there is the issue with what is still to this day labelled on their site as a feature of Drobo , Drobo Copy. An automated file copying system that performs scheduled back ups of specified folders on your computer. I used this extensively until one day, with a software update it stopped performing its duties. Drobo support failed to offer a solution and in fact one year down the line when I questioned them again about it they informed me that support for that feature was going to be removed entirely in an upcoming software upgrade. It seems they gave up with it themselves. Yet as I pointed out, it is still listed as a feature on their website to this day, a point which they seem to have ignored. Did I mention that Drobos software allows you to generate a report log for their engineers to take a look at ? That sounds useful doesn't it. Well it would be , but on several occasions their support indicated to me that the generated logs I sent them could not be decrypted.

Following a series of re-booting issues (often and quite extensively known as the Drobo re-boot loop) I was told there was a hardware problem with my Drobo and I needed to purchase a replacement. I was offered a discounted price but this price was still $100. When Scott Kelby experienced the same problem and quite publicly wrote about it, Drobos CEO contacted him and told him that he should not have been asked to pay for a replacement since it was a known problem. He should instead have been sent a replacement right away. It's very hard not to suspect that this was purely due to Scott Kelby's incredible reach in the creative community but of course I contacted Drobo immediately and informed them that I too had been forced to pay. I also took the opportunity to list all the problems that I have experienced with the Drobo up to that point, including new incompatibilities with a recently purchased Drobo S which required me to log out of Mac OSX after every re-boot in order to gain control of my keyboard and mouse when Drobo was connected over eSata. Instead of a refund on the $100 they offered to upgrade my old 2nd gen Drobo to a Drobo S. It seems I still had a little kool-aid left to drink as I took them up on the offer.

Fast forward a few weeks and I'm sitting at my desk when all of a sudden one light goes red on this new Drobo S that they sent me. Immediately my computer locked up and Drobo began rebooting itself several times flashing various combinations of colored LEDs, no patterns of which matched anything in the user manual. Eventually it settled on having one red light against one of the drives but also repeatedly flashed up on-screen messages warning me that it was in data recover mode and I should not remove any drives while it dealt with the problem. Contradictory information though as a solid red light means ” this drive is full, please remove it and replace it with something larger”. It also helpfully flashed up messages telling my data was still accessible , which it was not. Any attempt to access the Drobo resulted in my Mac becoming locked up and Drobos software no longer recognized the presence of the machine. I reached out to their support, who were extremely helpful considering it was a weekend and I talked in great length with them on a Sunday. We tried numerous things, including installing a new version of their software which just crashed my Mac again all on its own….. *sigh*

They returned to me the following day with the news that one of the drives in my Drobo had failed and that I should just replace it.

Drives fail, that is no big issue. It's why I have double redundant data systems. The problem is though that the entire reason for owning a Drobo over another, much faster solution, is the ease at which it should be possible to deal with these drive failures. As all the videos showed me a light would just flash red and I could pop the dead drive out and put a new one in! If that isn't how it goes down, if a failed drive means hours of frustration wandering what it is doing as it repeatedly crashes my computer, an hour on the phone with support and a day without access to my data. Then what is the point in putting up with Drobos repeated hardware and software problems ?

The answer has to be that there simply is no longer any point. The final reason for maintaining a Drobo system in my office has now been removed and you can add me to the list of disgruntled photographers who are seeking a better, more reliable solution.