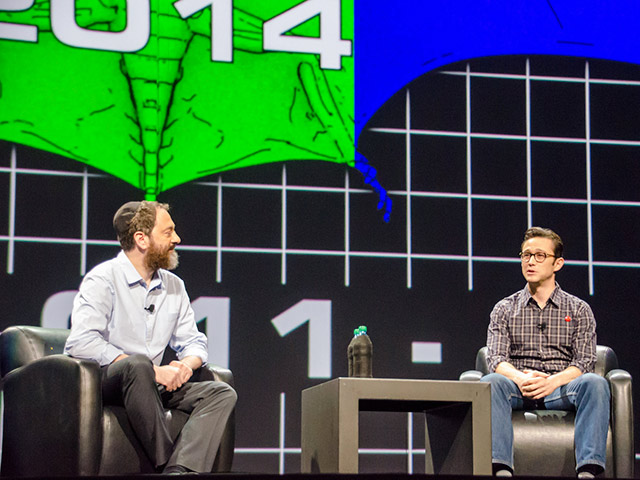 Already seen is the new Adobe Premiere Clip, which brings advanced editing tools to iPhone and iPad video. You can work entirely on just one mobile device, or shoot on iPhone, edit on iPad, finish in Premiere Pro. Karl Soule posted excerpts on Adobe Clip from the keynote, and Adobe later posted a demo, embedded below. There's a team blog too. Meagan Keane and Scott Belsky introduced the Adobe Premiere Clip – New mobile video editing app, one video among a bunch posted on the releases in the playlist below:

One sneak peek at MAX 2014 was the After Effects-related Project Animal, which was shown in the Microsoft push towards the end of the keynote. If you're interested in pre-release testing or want to see it again, see the video below at the 6:00 minute mark (there's also an audience recording using the Premiere Clip app):

“For those who don’t know what I’m talking about, the Advanced Product Development team who work closely with the After Effects team has been working on a character animation product code-named Project Animal. While your character is the puppet, you are the one holding the strings. By accessing your computer’s webcam, Project Animal will track the movement of your head, mouth, and eyes—including your blinking, glancing, and eye-brow raising—and move your puppet accordingly. When you talk, your character talks. When you feign surprise, so does your character. When you’re grumpy, your character is too.”

The sneak peeks include new technology in development, but don't get too excited because we've seen some of this before (2013 video), and not everything gets released.