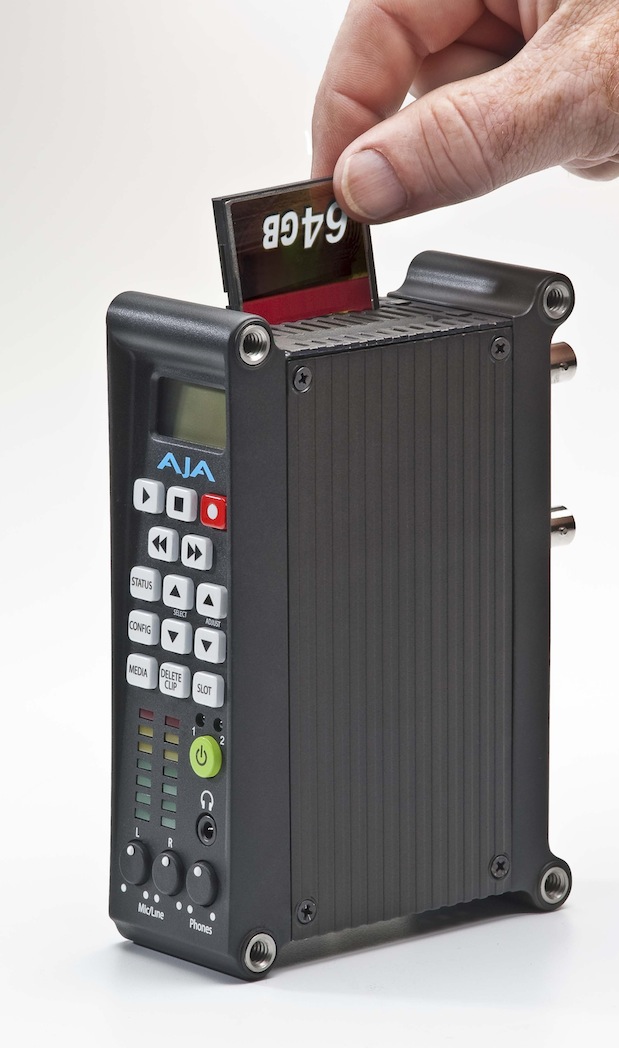 Like a miniature version of the original KiPro from AJA (which I reviewed in October 2009), the KiPro Mini performs many of the same functions (although not all of them) in a fraction of the space -and at a fraction of the cost- and is designed to dock onto the back of many professional camcorders, while it makes a higher quality recording than that is possible internally with most of them. With a flood of other 4:2:2 dockable recorders reaching the market (and one that existed previously which recorded MPEG2 8-bit), this article will attempt to point out the KiPro Mini’s unique virtues, so you’ll have a better idea why it may -or may not- be the best one for you.

As always, the purpose of this review is to point out details which are not necessarily obvious when reading the information on the manufacturer’s website -not to replace that important resource- so by all means, do visit their site too! This review also offers some competitive info, camera compatibility info, and my firmware update wish list.

Is the KiPro Mini a “broadcast” recorder?

If you haven’t done so yet, please read my related article Do you work in the broadcast industry? What does broadcast mean? You’ll find that the US$1,995 KiPro Mini indeed qualifies as “broadcast” by complying with two of my definitions from that article: definitions 19 and 21. Of course, the KiPro Mini not only meets the technical requirements (as do many of the newcomers in this category of dockable 4:2:2 recorders), but it is also built like a brick house, and has HD-SDI and analog XLR audio inputs with high-quality preamps. (Some other 4:2:2 docking recorders lack HD-SDI inputs, and some skip the analog audio inputs altogether, counting exclusively on embedded digital audio from the camera. This may or may not compromise the final audio quality, depending upon the quality of the camera’s audio preamp… and whether or not dual system audio is employed in the production.) In addition to the “broadcast” connectivity, a/v quality, and build quality, AJA even offers an optional mounting plate that facilitates attaching an Anton Bauer or V-Mount battery plate! 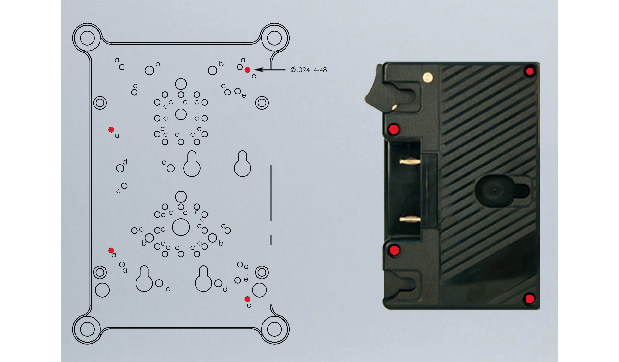 The few missing functions compared to the original KiPro

The original KiPro is larger and has (at least) three features which are missing from the KiPro Mini: analog video i/o, the scaler (which allows recording a different resolution than the source, and outputting a different resolution than that has been recorded) and large capacity recording. As you may recall, the original KiPro records either on SxS (ExpressCard/34) media or on KiPro removable media, which are now available both in magnetic (up to 500GB) and SSD varieties. I believe that most people who are going to search for a recorder to dock onto a camera won’t miss the scaler at all. However, some of them will likely miss the capability of recording several hours on a large-capacity module. The KiPro Mini records exclusively on CompactFlash (CF) media, which currently maxes out at 64GB. According to Jon Thorn, AJA’s product manager for the KiPro Mini, this is what we can expect from a 64GB CF card:

Note that all approximations include 2 channels of 24-bit 48KHz audio. Also note that these approximations are based on a target data rate for a VBR codec. Values are derived by using the AJA DataCalc application, available for download from the AJA website or as an iPhone app from the Apple AppStore. Both versions are free of charge.

Although this is substantially less recording time than what a 500GB module would allow with the original KiPro, let’s put things into perspective: In the worst case (with HQ recording), ±30 minutes is ±10 minutes more than we “old timers” used to get from a typical 20-minute mini U-Matic tape that we’d record in the field using a VO-4800, VO-6800, VO-8800 (or the lucky ones who had a BVU-150), which used a heterodyned color-under analog system in SD, as opposed to a pristine HD 4:2:2 10-bit component digital recording 🙂

Back when I reviewed the original KiPro (which is -of course- still available for US$3,995), I suggested many possible applications, one of which was that of a “Studio Recorder”. That is probably the only application which is not in common with the KiPro Mini’s likely applications, not so much because of the lack of scaler mentioned above, but because of the relatively small recording capacity of the CompactFlash modules. Certainly not all, but many studio productions involve a longer duration.

I realize that both the original KiPro and the KiPro Mini only have SD-SDI/HD-SDI (not 3G-SDI), so I won’t ask either of these products to record signals that require 3G-SDI, since that would go way beyond what a firmware upgrade would (at least potentially) allow. The following wish list applies to all of the new recorders that employ variations of Apple’s ProRes, since the following wishes are strictly related to signals that certain cameras can indeed deliver over HDMI.

Just before the AJA press conference at NAB 2011 last week, I had a chance to converse with Bryce Button of AJA, and tell him about some of the above wishes. He responded that none of those issues were to be covered during the press conference, but took note to look into them and get back to me later. One announcement regarding a firmware update for the KiPro Mini (which is not related to the above wishes) is just ahead in this article.

Specific cameras where the KiPro Mini is uniquely qualified

Of course, the KiPro Mini is qualified to connect to any camera with HD-SDI or HDMI output. At NAB 2011, AJA and RED jointly announced that the KiPro Mini is the first recommended ProRes solution for the RED EPIC camera. Beyond that, the KiPro Mini is uniquely qualified (among ProRes422 docking recorders) to be used with high-end Panasonic cameras which have onboard VFR (variable framerate recording) via HD-SDI (VariCam over HD-SDI). 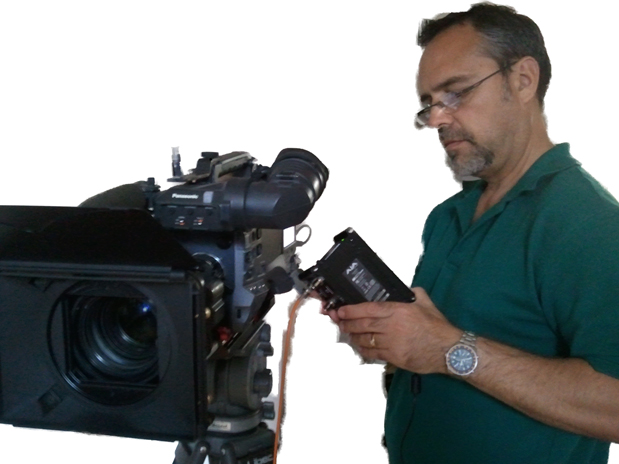 Jorge González of Acquest Multimedia analyzes the KiPro Mini to breath new life to his Panasonic camera, which currently records using the DV100 códec on a P2 card. (See article text for details.)

In fact, the KiPro Mini will add a substantial amount of picture quality to those cameras, especially those which internally record only with the DV100 (“DVCPROHD”) códec, since the KiPro Mini allows those cameras to record all of the pixels that the HD standards decree, even in the VFR modes. As explained in my previous articles, the DV100 códec (“DVCPROHD”) in 720p mode records only 960×720 instead of the full-raster 1280×720. In 1080 mode, the DV100 códec records either 1440×1080 (50Hz framerates) or 1280×1080 (59.94Hz framerates), rather than the full 1080 raster which is 1920×1080. It should be noted that (at publication time of this article), the KiPro Mini does not work with the VFR modes of the Panasonic AF100, more because of the lack of appropriate signals from the camera, rather than any deficiency in the KiPro Mini. If you own the AF100 and the KiPro Mini (or any other external 4:2:2 recorder), use the external 4:2:2 recorder for your normal shots, but use the internal camera recorder for your VFR shots.

Other special cases where the KiPro Mini is uniquely qualified

As stated earlier: unlike some other 4:2:2 docking recorders which lack XLR audio inputs and depend mainly upon the embedded digital audio via HD-SDI or HDMI, the KiPro Mini also has the option to record via its XLR audio inputs. If you are shooting a commercial or dramatic production, you may choose to record dual-system audio using a separate professional audio recorder. However, if you are shooting for news, you may prefer to stick with single-system audio. If you have determined that your camera doesn’t have pristine audio pre-amps and don’t want to employ dual-system audio, then the KiPro Mini’s inputs may represent a unique feature for you among competitive docking 4:2:2 recorders.

The KiPro Mini complies with both definitions 19 and 21 of “broadcast”, and in many cases is uniquely qualified. Other docking 4:2:2 recorders that I’ll be reviewing soon may comply with “broadcast” definition 19 but not necessarily 21, but may offer other features at a lower cost, while they will not qualify for those unique cases, and will not have XLR audio inputs. If you need your 4:2:2 docking recorder to comply with both definitions 19 and 21… and/or if you require some of its unique features, then the KiPro Mini is your candidate. If neither of the above is true, then stand by for my upcoming reviews of other docking 4:2:2 recorders!