A series of videos demonstrating how to put the new features to work. 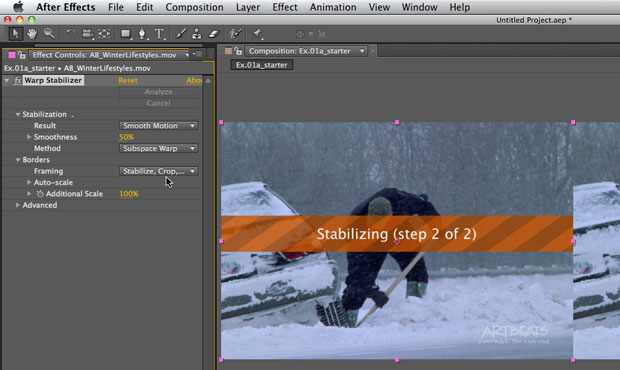 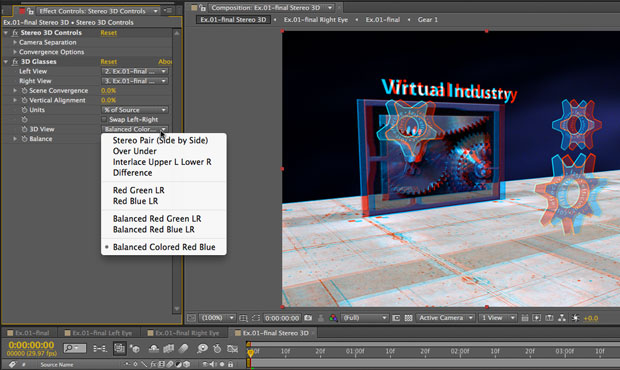 Just one year after the release of After Effects CS5, the AE team has cooked up a very nice update with some significant new and updated features (plus a lot of nice small ones as well) that will be of interest to both motion graphics and visual effects artists. To share our take on these with you, we’ve worked with AdobeTV who is hosting a series of videos we created on how to take advantage of our favorites among the new features. These are embedded over the next few pages, along with some quick comments about the new features. These movies include :

Page 2 (the next one): Warp Stabilizer

Page 4: Stereoscopic Tools in After Effects

Virtually all of the examples demonstrated in these videos use project files from our book Creating Motion Graphics with After Effects (5th Edition for CS5) – so if own a copy, you can follow along once you get your hands on a copy of AE CS5.5 yourself.

(By the way, don’t freak out over the movie thumbnails looking so low-res; the movies themselves are much sharper.)

This is the headline new feature in After Effects CS5.5: Just apply it to a clip, wait for it to process, and now the bumps in the camera movement have been smoothed out without any user intervention required. A single parameter allows you to adjust the amount of smoothness; a simple pop-up allows you to completely lock down the shot. Of course, there is a lot more power under the hood…

See how to quickly apply the new Warp Stabilizer to footage for instant gratification, including setting the Smoothness amount as well as choosing between Smooth Motion and No Motion:

Learn more about the new Warp Stabilizer’s Result and Smoothness settings, Stabilization Method, choices for how to treat the borders of an image, and automatic scaling options.

Explore the new Warp Stabilizer’s advanced settings, including its innovative Synthesize Edges option. In the process, you will learn how to make custom adjustments to compensate for problem footage.

The Warp Stabilizer’s ability to automatically distinguish between foreground and background requires user intervention on some shots, such as a greenscreen stage with tracking dots in the background. Learn how to work around these issues.

There have been two early criticisms of the Warp Stabilizer: You currently can’t reverse the process (so you can’t stabilize a scene, add or touch up an element, then re-introduce the original camera motion), and that it has taken over the traditional Stabilizer’s button. If you still need to get access to the original AE Stabilizer (i.e. for the case spelled out in the first complaint), it can found still lurking in the Tracker panel: click Track Motion (not Stabilize Motion), and then switch the Track Type to Stabilize.

3D Lights in After Effects now have falloff based on distance, allowing you to fine-tune which layers in a scene get illuminated and which recede into the distance. And the 3D camera – which used to suffer from a depth of field blur algorithm so ugly and slow that few used it – now has a really nice set of realistic iris simulations which both look good and renders with quite acceptable speed. If you have 2D footage instead of a 3D scene, an updated Camera Lens Blur effect offers the same simulations, with support for a depth map for selective blurring. A handful of camera utilities have also been added:

An overview of the significant updates to 3D space inside After Effects CS5.5, and then explore the creative options provided by the new 3D Light Falloff parameters.

Explore the greatly enhanced 3D Camera Depth of Field options in After Effects CS5.5, including realistic iris simulations as well as the ability to enhance specular highlights.

After Effects CS5.5 makes it easy to create a 3D Orbit Camera Rig, which simplifies circular animations. We expand on this by demonstrating how to perform smooth crane and zoom moves with this rig as well.

The greatly improved Camera Lens Blur effect in After Effects CS5.5 allows you to add the same advanced iris simulations and highlight enhancements to already-shot 2D footage offered in CS 5.5 by the impressive new 3D camera depth of field. (This movie makes a good companion to the one on 3D camera depth of field blur above, as we go further into the iris parameters here.)

After Effects CS5.5 makes it a lot easier to set up an easy-to-control stereo camera rig based on an existing 3D camera in After Effects, and get it to converge on an appropriate area of a scene. Combine this with the new depth of field blur mentioned above, and you’re on your way to creating more effective stereoscopic scenes. The 3D Glasses effect for previewing or mastering stereo material has also been greatly enhanced. Having a pair of red/blue (cyan) glasses handy will be beneficial when viewing these movies:

See how After Effects CS5.5 significantly eases the creation and control of stereoscopic camera rigs for 3D layers. We explain the resulting chain of compositions, including how to preview, where to add stereo footage, and what to render.

Learn how the new stereoscopic 3D camera rig plus resulting chain of compositions in After Effects CS5.5 are manipulated by the Stereo 3D Controls effect, including setting camera separation and the convergence options.

The Stereo 3D Glasses effect has been updated in After Effects CS5.5, including better convergence and alignment options for correcting problem footage plus a wider range of stereoscopic viewing options. Color balance workflows are also explored.

An oft-overlooked issue in stereoscopic production is how the point of convergence relates to the viewing plane. We demonstrate adding 3D depth of field blur to the equation to create more realistic, easier-to-view scenes.

Both of us came from the music field before we got into motion graphics. In Creative Suite 5.5, Adobe has ported Audition to the Mac and is now included in the place of Soundbooth in the relevant Suite bundles. Here are a couple of ways to include it in your workflow:

We show how a visually oriented person can take advantage of the Favorites and Presets in Audition to improve their After Effects soundtracks, from utilities such as Repair DC Offset to creative possibilities such as lo-fi simulations.

Advanced Audition for After Effects

Learn the proper workflow for using Audition with After Effects CS5.5 to enhance the sound when audio is already embedded in video sources. Includes a tutorial for using Audition’s Dynamics Processing module to improve the loudness of voiceovers (a module we find ourselves using more often in our work now).

next page: Tweaks for Geeks

Beyond the headline new features, every new release of After Effects tends to include numerous refinements, shortcuts, and enhancements that solve problems or otherwise save a few minutes each day performing common tasks. Here’s a few of those in CS5.5:

We review existing methods to work on one portion of a chain of compositions while viewing the final result in another, then introduce a new feature in After Effects CS5.5 that simplifies opening a second viewer for side-by-side work.

Review recent enhancements for finding sources, effects, and parameters that may be buried deep inside an After Effects project, including the new-in-CS5.5 “Most Recently Used” search terms – plus the power of “and” versus “or” searches.

As an extension of Adobe’s recent focus on metadata and being able to track information throughout a production, After Effects CS5.5 now has the ability to access the Media Start and End times as well as “tape” names for assets that include them.

Gain a better understanding of how After Effects takes advantage of both RAM and disk caching for both individual layers and entire compositions to improve performance and reduce rendering times.

We demonstrate the new 3D Point Control for expressions, plus the ability to tie together effects with complex arbitrary controls. We also list the additions and enhancements to both expressions and scripting in After Effects CS5.5.

Save Project as After Effects CS5

After Effects CS5.5 includes the long-requested ability to save a project file back to the prior version. We demonstrate how this interacts with the new features added in CS5.5, including the ability to remember CS5.5-specific effects.

Of course, there are even more new features and enhancements that we didn’t get into in the videos above. After Effects documentation and support guru Todd Kopriva will no doubt point to an exhaustive list of all of the changes between AE CS5 and CS5.5 in his blog, Region of Interest (which is essential reading for After Effects users in between releases, as well).

If you have a lynda.com subscription, all of the videos above are also posted in higher fidelity as our After Effects CS5.5: New Creative Techniques course. We will also be incorporating CS5.5 into our After Effects Apprentice video series on lynda.com, including special movies on the new 3D and Warp Stabilizer features as part of the relevant lessons.

In the meantime, we’re already using After Effects and Audition CS5.5 as part of our workflow, so obviously we think they’re worthwhile upgrades. (One known annoying bug that we expect will be fixed not long after release: If you edit a text layer, you may get significant cursor flashing and other delays – especially if you have an effect such as Drop Shadow already applied to the layer. Move the cursor outside of the Composition panel’s frame, and it will be much more snappy.) Yes, there are a lot of areas of the program which did not get an update (everyone has their list – and each list is probably different), but we still think this is pretty darn good for a “dot” release. We hope these videos help you decide whether to upgrade yourself, and if you do, that they help you hit the ground running when the new versions arrives.

Mandatory (even if blindingly obvious) FTC disclosure: We have relationships with Adobe, Focal Press, and lynda.com. Adobe was so kind as to give us free access to the software mentioned here before its release, and Adobe TV paid us for the right to distribute our otherwise independently produced videos about their products. As will no doubt surprise no one, lynda.com pays us for that right as well; Focal Press even pays us when they sell books we wrote on the subject. Its how we can afford to spend the numerous hours we do learning the new software, and sharing what we learned with you our fellow users.

The content contained in Creating Motion Graphics with After Effects, New Creative Techniques, and the CMG Blogs and CMG Keyframes posts on ProVideoCoalition are copyright Crish Design, except where otherwise attributed.