A big overhaul under the hood promises a more responsive program.

The Adobe After Effects team makes a point of regularly polling its users to hear what they might want next. What came back was not just a desire for shiny new features, but also increased performance. In response, the After Effects team embarked on a long-term project to rewire how this 20+ year old program works internally, which is the cornerstone of the just-announced (but not yet released) next version of After Effects. But performance isn’t the whole story; a couple of very intriguing shiny new features are also slated for this release. We’ve had the opportunity to work with a pre-release version; here’s a preview of what you can expect later this spring.

The Adobe After Effects team makes a point of regularly polling its users to hear what they might want next. What came back was not just a desire for shiny new features, but also increased performance. In response, the After Effects team embarked on a long-term project to rewire how this 20+ year old program works internally, which is the cornerstone of the just-announced (but not yet released) next version of After Effects. But performance isn’t the whole story; a couple of very intriguing shiny new features are also slated for this release. We’ve had the opportunity to work with a pre-release version; here’s a preview of what you can expect later this spring:

The way the After Effects team has unlocked performance improvements in the next version is by untangling the user interface (UI) portion of the program from the rendering portion. One processing thread now handles the UI, and another thread handles the rendering.

In the simplest terms, this means you don’t have to wait on an effect to render or a frame to be composited before you can make another edit. This change has impacts big and small throughout the program, from more responsive scrubbing of parameters (particularly for render-intensive tasks), to the ability to make edits while a preview is looping – with your changes appearing in subsequent plays of the loop as soon as they are ready, without having to stop playback first.

In addition to the ability to edit a comp while it is previewing (referred to as “Uninterrupted Preview”), Adobe has also made other changes in how previewing works under the guise of “unified preview.” For one, the default spacebar preview is being greatly overhauled to behave more like an NLE such as Adobe Premiere Pro. Second, they’ve replaced the concept of RAM Preview versus Standard Preview with the updated concept of “Preview Favors Frame Rate” versus “Preview Favors Length.” Here’s some preliminary shots of the overhauled Preview panel (still subject to change before it ships): 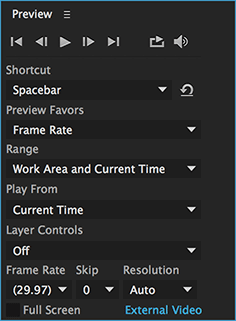 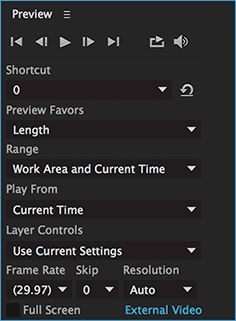 The overhauled Preview panel allows significant customization of what happens during preview, including whether to limit it to the Work Area or to include the space between the CTI and the Work Area, whether or not layer controls will be displayed during preview, and more. And yes, there will be a way to reset the settings to how After Effects currently behaves in version 13.2 (AE CC 2014.2) and earlier.

If you’ve been using After Effects for any length of time, the new preview scheme may take some getting used to, but ultimately, it’s a lot more flexible and powerful. 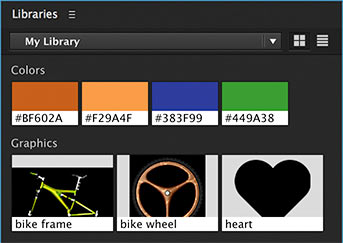 Another feature Adobe is touting for the next version of After Effects is the inclusion of Creative Cloud Libraries; you might be familiar with these from the current versions of Photoshop or Illustrator CC. Libraries allow you to share assets between different Adobe Creative Cloud programs on the same computer or across multiple computers on the same account. You can also access libraries of assets shared by other Creative Cloud users, plus content acquired for free or by purchase through the Adobe Marketplace. This is an “early days” implementation with hopefully more functionality yet to come (for example, you can’t currently add assets to a library from inside After Effects – you have to go through another program like Photoshop), but it’s a nice start, especially for collaborative environments.

An interesting aspect of this feature is its integration with some mobile applications, such as Adobe Shape. With Shape, you can take a photo with your iPad or iPhone, and in simplistic terms it performs a Find Edges followed by an Auto-trace to create vector paths that match the contours present in the image. You can edit and refine these paths, and then save them to your Creative Cloud Library – which will then appear inside the Libraries panel in this upcoming version of After Effects. (Chris can’t wait to try it on the petroglyphs that are abundant here in the Southwest!)

A new mobile app that can also be used in this ecosystem is the upcoming “Project Candy.” With this, photos you take with your mobile device are analyzed for their color scheme, which is then distilled into a .look Color Lookup Table file. Again, this can be saved to your Creative Cloud Library, and then applied to colorize layers in After Effects. Obvious examples are photos of the golden hour, dawn, or the grays of an oncoming storm, as well as color schemes of ethnic costumes, brightly painted buildings, rusty old warehouses, hot air balloons, and more. A screen grab from an early version of Project Candy in use is shown here.

As hinted above, there are a few quirks to the current implementation, such as the current default file format on the Adobe Marketplace being .svg files – which After Effects does not directly support (a round trip to Illustrator, or settling for an occasionally-available .png or .pdf stand-in, are the current workarounds). Also, Library files are currently saved in their own coded folder location, rather than automatically moved to your project file’s location (although they can still be collected using Dependencies > Collect Files). We’ll be talking about these workflow issues more after we have spent more time with it, and this next version of After Effects is actually shipping.

A separate team inside Adobe (which contains many After Effects alumni) has been working on a character animation program previously known as “Project Animal” and now called Adobe Character Animator, which will come bundled with the next version of After Effects. It has been previewed at various venues such as last fall’s Adobe MAX conference:

In a nutshell, Adobe Character Animator allows you to import a multilayered Photoshop or Illustrator file (which may be of a human character or otherwise), and if you’ve named the layers following a particular convention, automatically “rigs” those layers into an animatable puppet. It uses your computer’s camera to automatically recognize features of your face and the distances between those features, and map them to the relative location and scale of the corresponding puppet layers. Additionally, you can use your computer’s microphone to map your speech to various mouth poses, as well as use your mouse to trigger various functions such as particles (think bubbles coming out of a fish’s mouth on command) or to animate other portions of your puppet such as hands or hips. 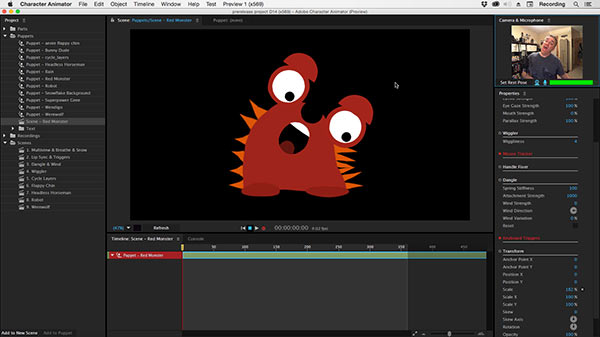 The magic of Adobe Character Animator is it allows you to record a performance in real time (with very close to real-time feedback on screen) – including recording multiple takes – and then edit that performance along a timeline. When finished, you can export it as an image sequence that can then be imported into After Effects for additional compositing.

And what if you don’t do character animation? You should still be excited, because an important piece of technology created for it – the ability to recognize and track features of a human face – has been spun off as an important new feature in the next version of After Effects, which we’ll discuss next. 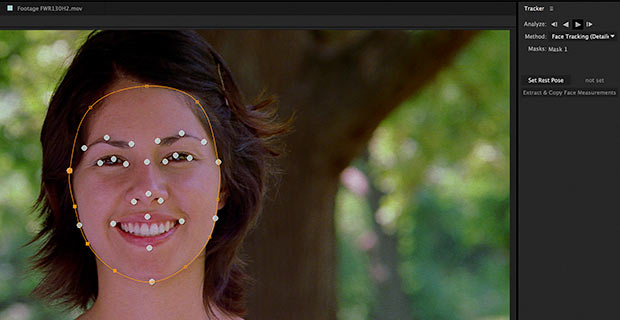 Adobe continues to add specialized tracking features to After Effects. The next version will include a new Face Tracker that may be accessed as an option in the normal Tracker panel. To take advantage of it, you select a frame where a human face is fully in view and facing as straight as possible towards the camera, and then draw a loose mask that encloses that face. With this mask selected, open the Tracker panel, and two new Face Tracking choices will be available: Outline Only and Detailed Features. Choose either one and click one of the Analyze buttons, and After Effects will redraw the mask to enclose the frontal portion of the face (in other words, from cheek to cheek and chin to forehead, but not the throat, ears, or hair).

After Effects will then keyframe and modify this mask shape to fit the outline of the face from frame to frame. Note this is in contrast to the Rigid Mask Tracker, which could transform but otherwise would not alter the details of the mask’s shape. Obvious applications of the resulting mask include color correcting or intelligently blurring the facial features; we suggest judicious use of the Mask Feather and Expansion parameters to hide the edges of the effected area.

But the Face Tracker has other tricks up its sleeve. If you choose the Detailed Features option, you will also get the special Face Track Points effect that contains keyframed position data for a large number of standardized locations on the face. There are additional buttons in the Tracker panel to choose which frame is to be considered the “Rest Pose” for reference; after you set that, you can click another button to add a second effect called Face Measurements that contains keyframed values for items such as the mouth face and width relative to that Rest Pose.

Advanced users can then have a field day using expressions to link effect controls points and other parameters to these locations and measurements. Although we do little character animation ourselves, we can certainly see the possibilities of using this information to humanize, say, a logo or text animation based on your performances using your own face.

Of course, there are other changes in this upcoming release. Adobe continues to tweak the refreshed user interface for After Effects, including more user control over the brightness (but not color) of highlighted items, replacing some panel scroll bars with menu lists, and giving hopefully friendlier warnings when expressions have errors in them.

While Adobe refines the scheme of splitting the UI and rendering threads under the hood, some features such as evaluating expressions have enjoyed an additional speed boost. However, a few features have been removed or temporarily disabled, including Brainstorm and ping-pong preview loop mode (gone) and multiprocessor as well as Watch Folder distributed rendering (on sabbatical). For these reasons and others, the next version of After Effects will install alongside the current version – it will not overwrite it. Also, the next version will share the same project file format as the current version (13.2, also known as CC 2014.2), so you can migrate projects backwards if you need to.

Again, this new version that was announced just before NAB and which we’re talking about here has not been released yet, and as such some details are still subject to change – that’s why we are giving you more of a preview than an in-depth analysis. But we promise when it does ship, we’ll be right there with more details on how to put these new features immediately to work.