One of a series of undocumented improvements in Premiere Pro CS 5.5 and Media Encoder CS 5.5 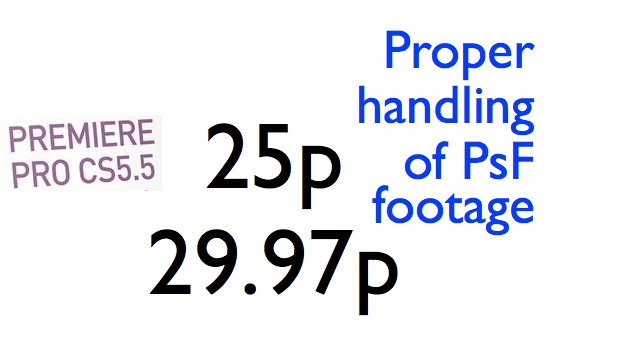 You may have noticed that even many late model AVCHD cameras shoot medium framerate progressive video (i.e. 1080/25p and 1080/29.97p) as PsF (Progressive Segmented Frame), meaning that they (unfortunately) record 25p-over-50i and/or 29.97p-over-59.94i. This regrettably occurs with both consumer and even some of the latest professional AVCHD cameras with the mentioned progressive framerates. Fortunately, this practice doesn’t damage the internal AVCHD video recording quality to any perceptible degree since the encoder knows that it’s progressive, but unfortunately it makes the video more susceptible to being mistreated later on, either by a video editing program which mistakenly thinks that it is interlaced and consequently de-interlaces it when importing it into a progressive timeline, or by an HDTV set that does the same thing. Unnecessary de-interlacing is a bad thing and should be avoided when bringing progressive footage into a progressive timeline… or into a progressive display device, like an LCD, Plasma, or projector. One of the best ways to prevent unnecessary de-interlacing is by recording the progressive signal natively (not as PsF), but that’s not the case with many cameras when shooting 1080/25p and 1080/29.97p. This article will clarify the issue further, explain how we overrode it manually with Premiere Pro CS 5 and Media Encoder 5, and how the 5.5 upgrade resolves it automatically!

As I’ve covered in several prior articles, some non-AVCHD professional cameras offer native progressive recording in all framerates exclusively, while others offer it as an option at a given framerate. But in all AVCHD cameras I’ve examined so far, the only truly native progressive recording I’ve seen has been with the 23.976p, 50p, and 59.94p framerate, but not in all of the AVCHD cameras. Some of the much lower-priced ones only record 23.976p over 59.94i using a complex pulldown, and some don’t offer that framerate at all. But this article is about the much simpler 2:2 pulldown used when recording 25p-over-50i or 29.97p-over-59.94i as PsF. I would love it if all AVCHD camera manufacturers would immediately offer exclusively-native progressive recording at these framerates and offer free worldwide onsite retrofits of all existing AVCHD cameras, but that is a fantasy which is unlikely to be fulfilled. As a result, the issue covered in this article is something that all editors should really know and understand to avoid the consequences.

If you bring a progressive video into a progressive timeline and the software mistakenly believes that the video is interlaced, it will often automatically de-interlace it. The first issue is that the de-interlacing process can soften the progressive image or otherwise degrade it. When I brought this situation up with Karl Soul© of Adobe at NAB 2011, he immediately mentioned another negative side effect: He said that it can also cause the software to miscalculate the way it should handle the video when a squeeze (picture-in-picture) effect is executed.

How was this remedied with Premiere Pro CS 5 or in Media Encoder CS 5?

Before CS 5.5, users of Premiere Pro CS 5 or Media Encoder CS 5 who were aware and conscious of the issue (i.e. my consulting clients) would select the 25p or 29.97p clip in the bin, right-click, and in the contextual menu select Modify>Interpret Footage. There they would see under Field Order that version 5 had misinterpreted the footage as interlaced when they read that by default it had selected the first option (Use Field Order from file: Upper Field First) as shown in the example below. 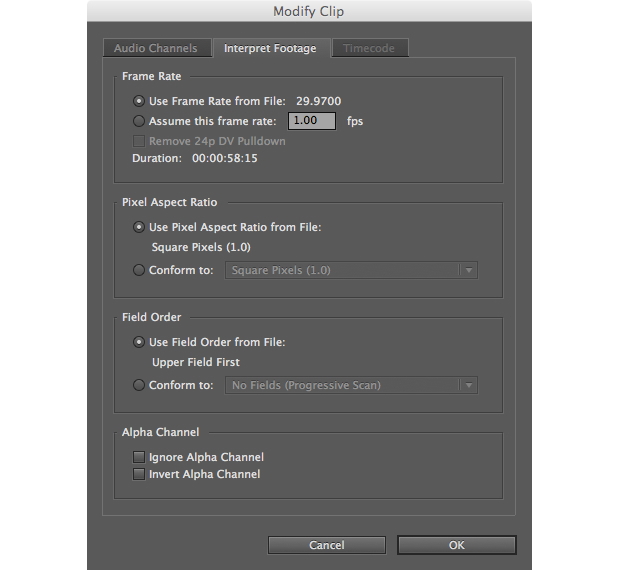 An AVCHD 1080/29.97p recorded as PsF and misinterpreted by Premiere Pro CS 5 as being interlaced.

Then they would correct the situation by clicking on Conform to: No fields: (Progressive Scan) and then OK. If they had several clips, they could list the bin as List, select multiple PsF clips simultaneously, and follow the same procedure with all of them at once. 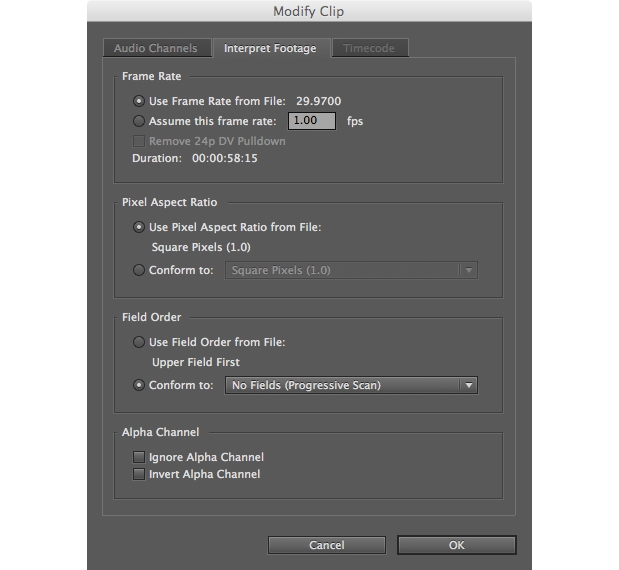 An AVCHD 1080/29.97p recorded as PsF after being corrected in Premiere Pro CS 5. Now it is treated as progressive.

This is action is fortunate no longer required with version 5.5! 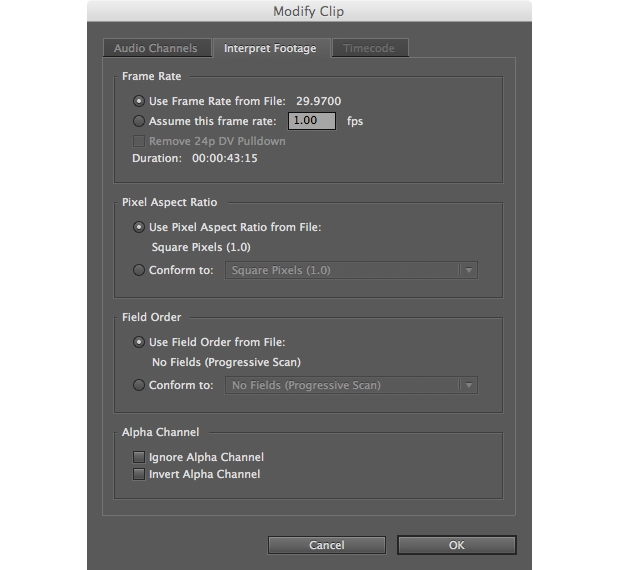 I was ecstatic to see that starting with both Premiere Pro CS 5.5 and Media Encoder CS 5.5, this action is no longer required (at least with AVCHD PsF clips recorded by the two cameras I used to test). This is not only a timesaver, but it is also a potential human-error eliminator, since before, it was up to the human editor to remember and do it correctly… or suffer the consequences. At first, when I saw that 5.5 already saw it as progressive, I thought that the camera operator had done some firmware upgrade in the camera… but then I opened the same raw clip with version 5 (which fortunately I still had installed) and I realized that the camera didn’t deserve the credit: The credit goes to Adobe and the 5.5 update. Apparently 5.5 is looking deeper into the metadata (or possibly but less likely analyzing the content of the two fields) to recognize the fact that even though the footage is recorded over interlaced (PsF), the underlying video is really progressive and therefore should be treated as such, just like a diplomat in customs. If Adobe informs me as to the exact detection method used and how it changed from 5.0 to 5.5, I’ll update this accordingly.

Other formats where this issue is applicable

This issue is also applicable to HDV 1080/25p and 1080/29.97p recorded as PsF (non-natively). However, at publication time, I have not verified whether these non-native progressive HDV clips will be automatically detected as progressive with 5.5, or whether the prior manual technique will still be required. If you are dealing with that type of footage, you should check using the same technique shown for version 5 to see whether version 5.5 is detecting the clips as progressive or whether you need to change them manually.

In addition, you should check with any footage from any other tape-based HD 1080 format you know to be progressive in those framerates, and any 1080 P2 recorded with the DV100 (“DVCPROHD”) códec not recorded in the “N” (native) mode. There is no reason to do any of those things with 720p footage of any type, since the software knows that fortunately there has never been interlacing in any 720p formats.