This post is just a gentle public shaming for my friends over at Avid and Adobe. They are behind the engineering times when it comes to what is one of the most useful bits of metadata that can come from the shoot: iXML metadata set by the audio recorder that identifies audio channel names. (What is iXML and this metadata for WAV audio files? Try here and here for some technical understanding).

Additional information stored in the iXML “chunk” include information such as track names (such as “boom,” “char-1 lav,” and “char-2 lav”) and notes on files taken on set.

Imagine a complex shoot where you have multiple mics being recorded into a broadcast WAV file that you have to track throughout the entire edit to create the best cut you can and keep organized in order to pass the proper audio channels to post-production sound mixing. If you’ve ever dealt with those situations where you feel like you’re constantly muting and soloing, enabling and disabling audio channels to tell who is where you can appreciate how nice it would be to have those channels named in the timeline to correspond to what (and who) might be on those channels.

When a sound recordist is working on a shoot and they have multiple mics they are capturing (it could easily be a boom plus a number of individual lavaliere mics) they often use their recording hardware to name those different channels they are capturing. And the good ones name the channels for the person the mic is attached to. While a boom is a boom and a mix is a mixdown of all the channels having the individual mono channels named things like John, Lisa, Herbert, baby etc is OMG unbelievably amazing and handy when you’re in the edit.

There is a lot of metadata that can be set in a good audio field recorder. You can see some of that in this Sound Devices video below.

I’m sure that using an in-the-field audio recording device to type and enter names and words while on location isn’t nearly as easy as sitting at the typewriter I’m sitting at while writing this but it can be done on most any decent audio recorder and any sound recordist worth their day rate should take the time to enter this data (as well as clear it out of their machine if it isn’t correct). I’ve watched them do it and thanked them profusely.

We’ll use a WAV file from that shoot above and see how the metadata looks in the NLEs.

But how do you use this in your NLE … the right way?

We all have heard that metadata is the future of video editing and audio iXML metadata is one that has been around for a long time. How your NLE can use it varies by which NLE you’re using and part of this whole article is to maybe shame Avid and Adobe into adopting better iXML support since going through official feature requests hasn’t worked yet! Below we will see the same WAV files.

First, let’s look at the two of the big 4 NLEs that has put a priority on iXML metadata and how to use it.

I think Resolve wins the prize here because Resolve just does it right. Bring up the Metadata panel and the Audio Tracks grouping and you’ll see all of those labeled audio tracks. 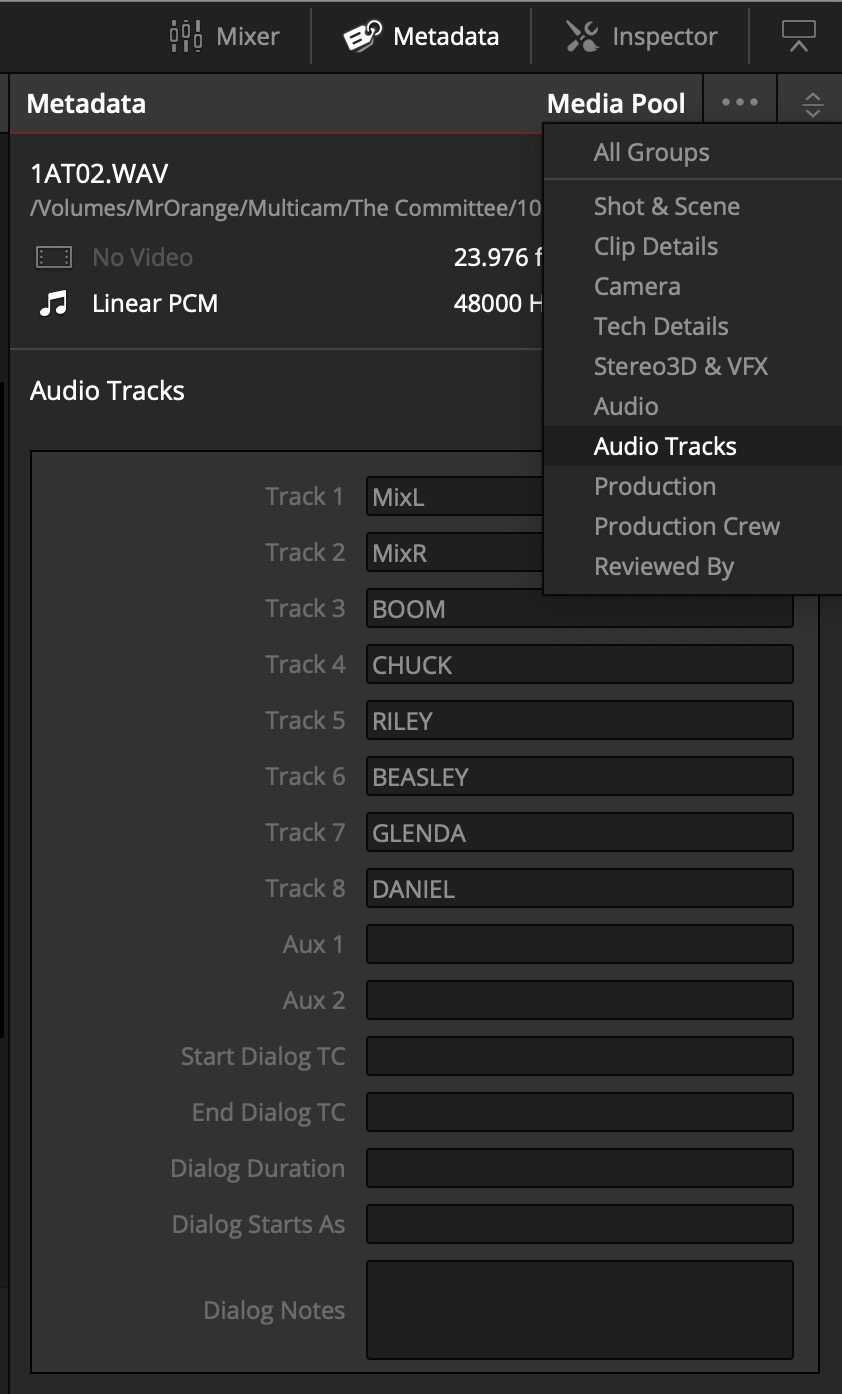 If you have iXML metadata in your WAV file (as we can see we do above) then when you edit the audio into your timeline that metadata is just a suffix of the clip name in each audio channel.

By carrying the metadata along with the clip into the timeline you can identify what is on each channel by name. Above is that data with the tracks 1 and 2 (the mix left and right) not edited into the timeline as well as some channels disabled. How amazing is that?

The one thing I would change in Resolve’s implementation is to have a way to display the iXML text before the clip name in the timeline. That was if you are in a zoomed out timeline view you can still see some of that metadata.

Since FCPX is the metadata king (Resolve isn’t far behind) iXML gets a place at the metadata table. FCPX 10.3 added iXML support and all you have to do is enable the assign iXML metadata checkbox in the import preferences to make use of it.

Larry Jordan has a good article on iXML in FCPX so give that a read for additional info on setup. 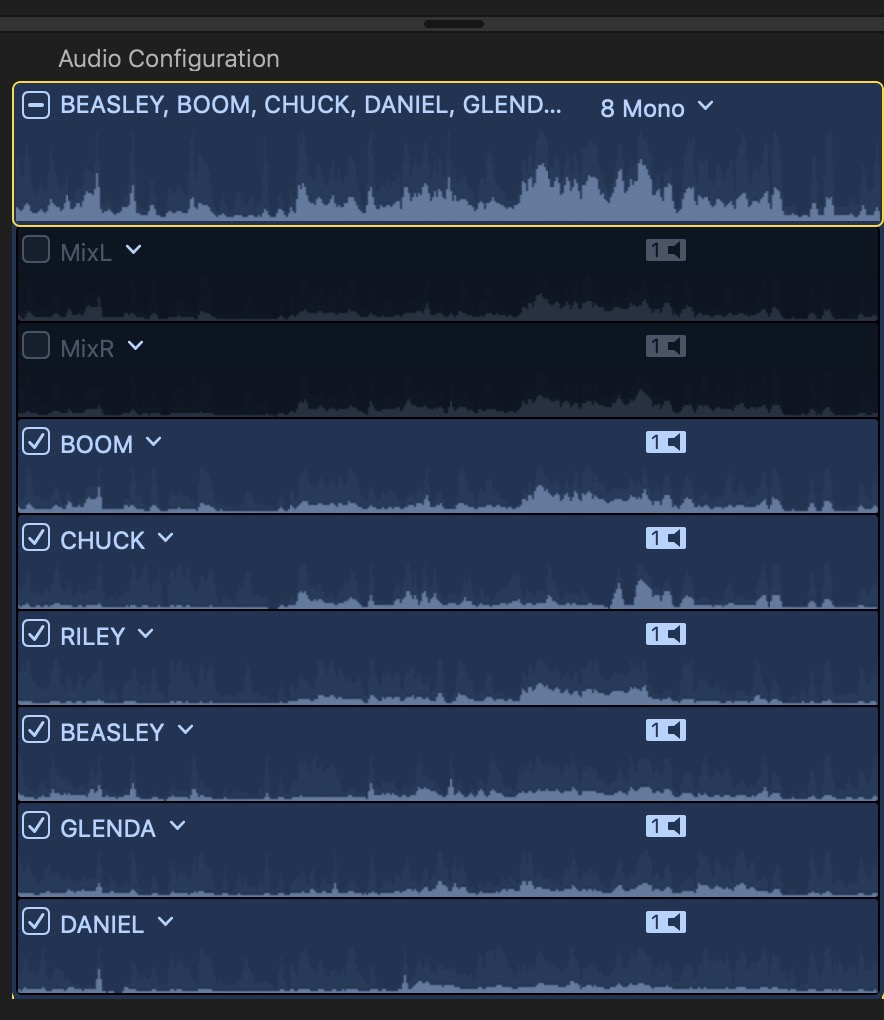 Once imported in FCPX you’ll have access to each channel, named via the iXML metadata. They can be viewed in the Audio Inspector. But the real fun begins in the timeline.

Using the Timeline Index and Audio Roles in Final Cut Pro X you can expand the audio and get access to the different channels by name. This can get a bit unwieldy as you bring in more and more WAV files with tons of different channel labels as you can end up with a lot of Audio Roles but this kind of easy to see data is nice. In the above image, the mix left and right did not edit into the timeline as I disabled them in the Audio Inspector. If I wanted to get them back I could re-enable them by clicking the clip in the timeline and enabling in the Audio Inspector. 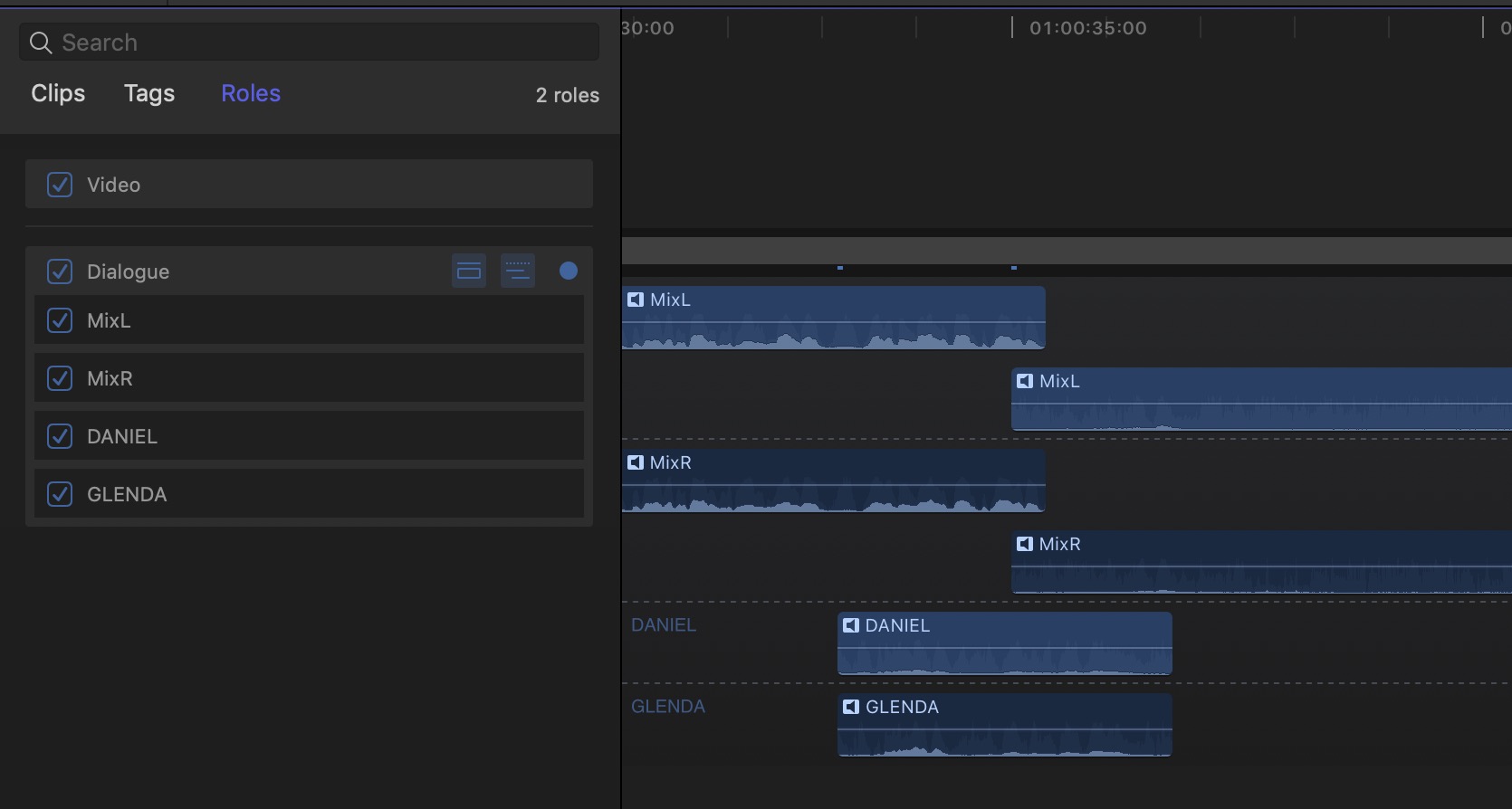 Imagine doing most of your edit with just the mixdown and then after picture lock (or whenever you need it) going back into the audio containers and expanding only the channels you need. There are some powerful things in there that FCPX can do that other NLEs can’t.

Make no mistake .. THIS is where Roles will shine, the new #FCPX 10.3 iXML support. As long as audio takes time to set it up pic.twitter.com/6K0PqmzrP3

How not to use iXML metadata in an NLE

I hate that I even have to write this section because after years of having this metadata come in from the field you would think the two oldest NLEs of the big 4 would have this worked out.

Most of the shame should go to Media Composer because Avid cuts the majority of reality television out there, a place where you usually have a cacophony of individual mics all competing for the ear as you edit. Trying to identify what is what is what can be a wrist-slitting experience. More than that it takes time. And time is …

This isn’t new information for Avid. Here is an Avid forum thread from 2013 that got reignited in 2016 trying to figure out how to use different types of audio metadata. There was another one I found while researching the article that I didn’t bookmark and can’t find again. There seem to be some convoluted workarounds involving AMA linking, consolidating and maybe ALEs but who the heck knows for sure. iXML support came along via an AMA plug-in years ago though the support seemed sketchy between an AMA link and importing of a WAV file. I worked on a show a while back where the solution was to take the polyphonic wav files from the field and break them into individual mono files and then manually rename them with the track data before importing them into Avid for the edit. These mono files retained timecode and were the new master audio files all through post-production.

Avid can see this metadata but it is at the bin level.

If you have the TRK metadata, use a bin List view to see it.

What you can’t seem to do is enable that iXML text on the clips once they are edited into the timeline. This is even more shameful when you consider that Media Composer has a specific timeline submenu for changing what clip text you display on clips in the timeline. 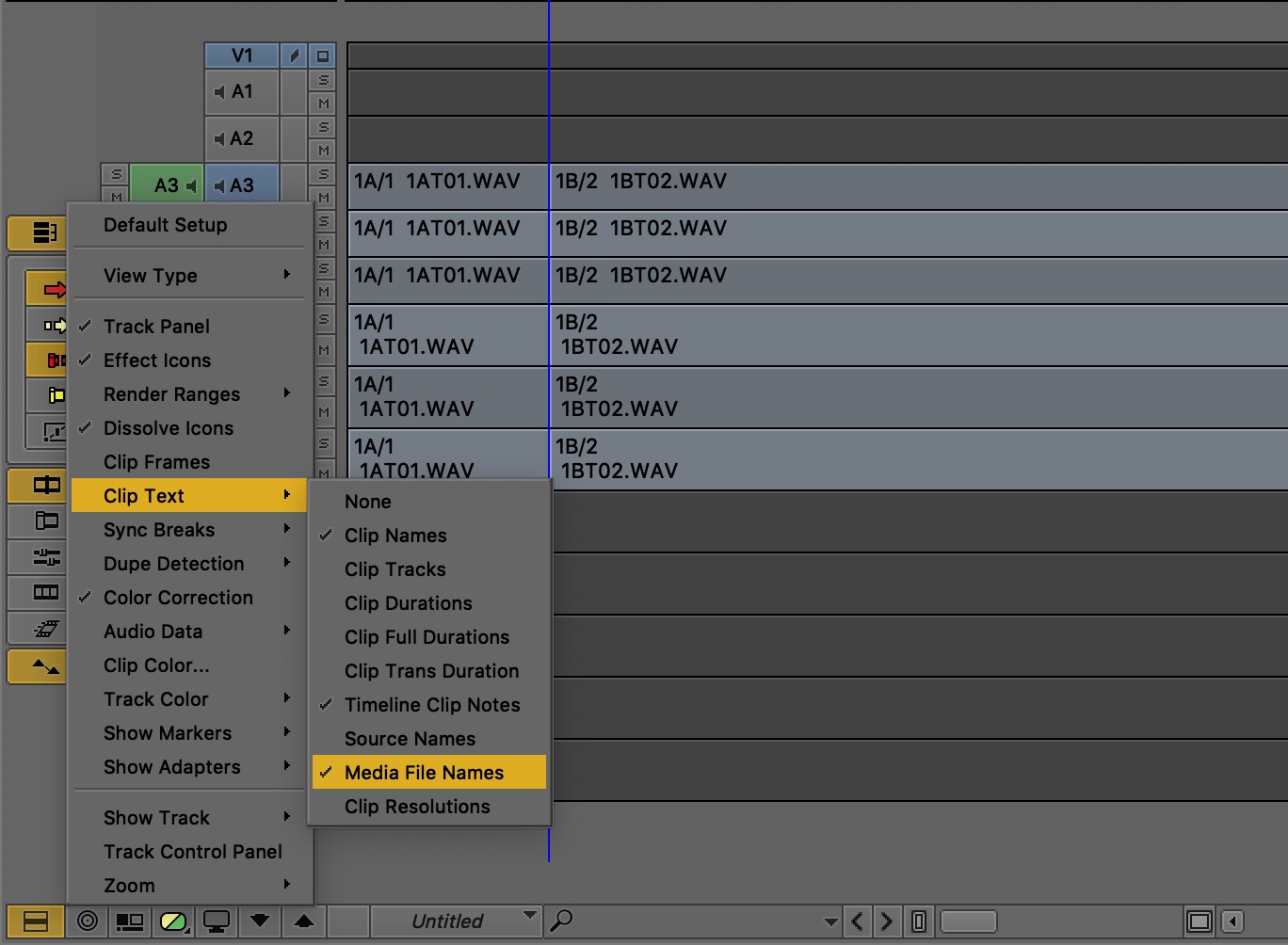 No option that I see there for iXML metadata.

Avid Media Composer engineers, please add the ability to display this iXML metadata in the timeline. Reality editors the world over will thank you for this. I would love someone to comment below that they have figured out a simple trick to make this work.

Premiere goes at the bottom of the heap because it has the worst implementation of iXML support among all of its brethren. I’m not alone in thinking this as it is a common discussion.

To even know if there is iXML metadata embedded in a WAV file you have to dig deep into the Metadata panel menu and find the iXML checkbox in the Metadata Display.

Once iXML is checked for display then you have to twirl down an insane number of little disclosure triangles to see exactly what you have. But you can’t see this data in the bin while in list view. Go figure.

IMHO this is a classic case of engineers over users because there can’t be anyone in the real world who thinks this is a good way to make use of this metadata.

Once the iXML metadata is found and everything is twirled down, you’re just stuck with viewing what you have there in the Metadata panel as there is no way to see that iXML data when you edit those WAV files into the timeline. It’s like the data is sitting there laughing at you in the metadata panel all while you work away in the timeline panel.

You can use the rename feature to rename clips in the PPro timeline you can’t rename individual audio channels of an audio file to match their metadata because that changes the name for all the channels in the clip.

Strangely enough, I got this individual channel renaming to work once and even posted in the Adobe forums about it but that seemed to go nowhere.

Baffling, I know. It’s more baffling we can’t make better use of this metadata.

If someone can come up w/ a way to batch rename and/or merge an audio report into channel named WAV files in @AdobePremiere you’re a genius.

So this blog post is my plea to whoever is prioritizing NLE feature development at Adobe and Avid, please support the use of audio iXML metadata on a per channel basis right in the timeline. You can’t imagine how much time it could save the editor as they/we very, very, very, very often need to monitor (or not monitor) a specific person or channel deep within a big multichannel WAV file.

Your users will thank you.

Please comment or share to help with the public shaming get this feature request up the food chain at both Avid and Adobe.