It takes more than a body and a lens to make a shooting package. 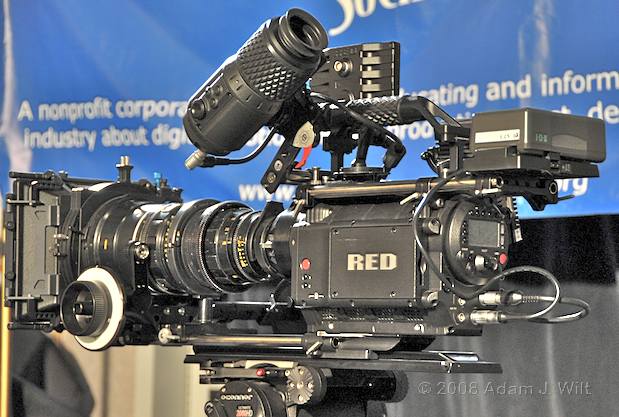 A fully-loaded RED ONE at Digital Cinema Society’s PCDP meeting.

Today most of the items on our RED ONE order changed status from “Backorder” to “Completed”, so it seems like a good time to discuss kitting out the cameras for real-world use.

We wandered over to Chater Camera in Berkeley to poke and prod at their RED ONEs and accessories, and talk to the ever-helpful Jay Farrington about what he would recommend. Last week at the Digital Cinema Society meeting in San Francisco, we saw how Leigh Blicher has equipped the Videofax RED ONE. Then, this past Saturday, I attended DCS’s “Accessorizing your Digital Cinema Camera” meeting at PlasterCITY Digital Post in Los Angeles. From these events and from discussions with other folks, we’re coming to something resembling decisions…

First: how do you affix the darned thing to a tripod? The RED site gives few clues as to what the basic body has in the way of attachment points, so we flipped a ONE over to look at it. 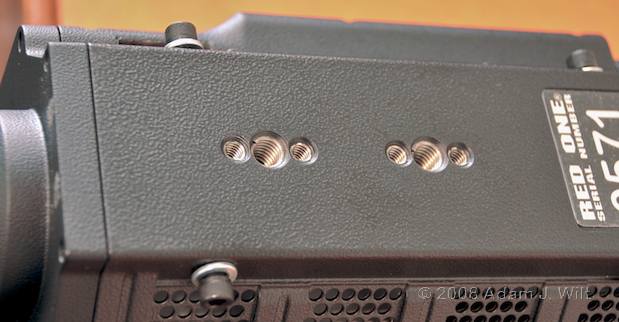 The raw underside of a RED ONE.

Behold: two 3/8-inch and four 1/4-inch sockets. The bare body can be bolted to a tripod plate as-is (though you wouldn’t have any place to attach support rods if you did so, as the bare camera doesn’t provide for them).

The holes the side-mounted socket-cap bolts are stuck into attach RED’s own mounting paraphernalia: 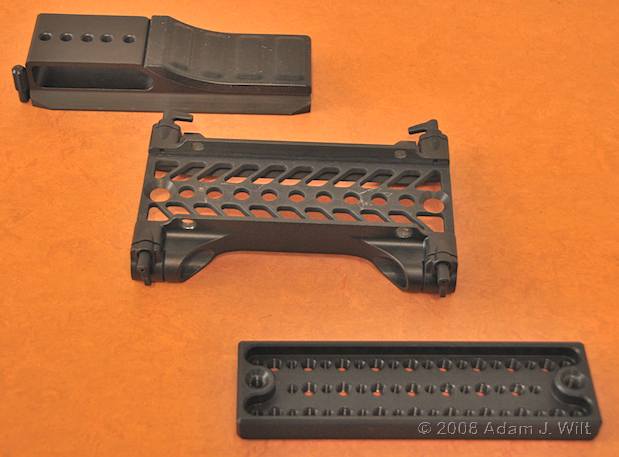 The bottom plate bolts to the sides of the camera and provides attachments for 19mm studio rods (which can be used to mount matte boxes, follow-focus mechanisms, and focus/zoom/iris motors ahead of the camera, and batteries and drives behind it). Either the shoulder dovetail or the cheese plate can be bolted into the bottom plate; the former allows a somewhat spartan shoulder support and a slightly wobbly tripod mount, while the latter allows firm tripod mounting (RED themselves suggest this division of labor).

Unfortunately it’s a bit of a production to switch between tripod and handheld configurations this way, and no one we’ve spoken to recommends this rig. Instead, they prefer the Element Technica Arri-style bridge plate (a.k.a. base plate), sold directly through the RED Store. 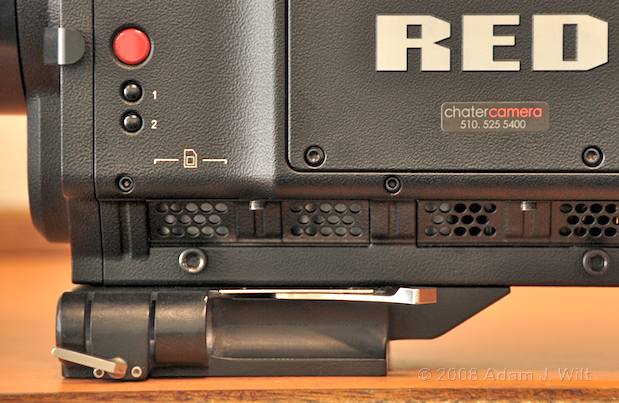 E.T. Arri bridge plate holding up a RED ONE.

E.T. makes this plate in both 19mm and 15mm studio rod configurations. (There are three different common standards for support rods [not counting Panavision’s]: 15mm lightweight, 15mm studio, and 19mm studio. I’ll simply refer you to Brook Willard’s excellent writeup for details, but in general, the US West Coast tends to be 15mm studio, while the East Coast and Europe tends to be 19mm. As we’re self-equipping most of the time [not renting], and as RED’s choice of 19mm kit is causing more 19mm stuff to be available even on the West Coast [where we are], we’ve opted for 19mm, just for the added robustness, so two E.T. 19mm bridge plates are in our RED order.)

The bridge plate clips directly onto a “dovetail” plate using a quick-release lever: 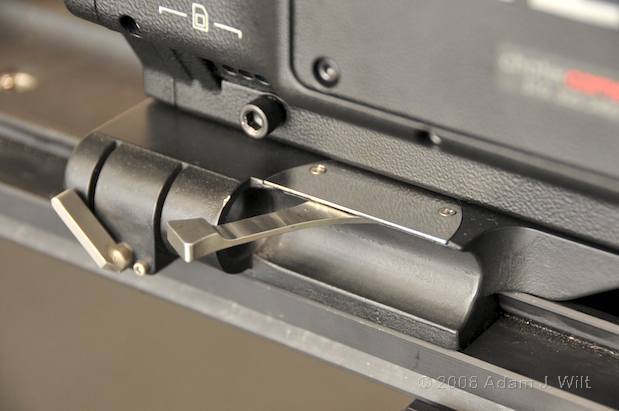 The lever sticks out sideways hanging in the breeze, ready to slice open an unwary chin, snag on a sleeve, or get bumped open and dump the camera, but Jay Farrington tells us that it’s the same sort of lever as any other bridge plate has, so who am I to say it won’t be fine? [1]

The dovetail itself is a long, milled tripod plate. A fat, V-shaped channel on the top is clamped in the bridge plate and the whole thing forms a rigid mount. Dovetails are available to fit directly into a variety of O’Connor and Sachtler and similar fluid heads, and come in various lengths to allow different camera positions as well as the attachment of long lens supports.

As to fluid heads, the same two models keep coming up in discussion: the O’Connor 2060, and the Sachtler Cine30 (we’re usually going to be using primes and—if it’s ever deliverable and it turns out to be any good—the RED 18-85mm zoom; if we expected to use a heavier lens like the Optimo 24-290, then a heavier head would be called for). Both heads take the same size dovetail. Maybe we’ll get one O’Connor and one Sachtler? More experimentation is called for on this point.

Next: So much for the bottom of the camera; what goes on the top?

On the top of the camera, it’d be nice to have a handle (we think being able the pick the beast up might come in handy); we’ve opted for both the RED top handle and the handle extension. These bolt onto RED top mounts, which also provide attachment points for an upper set of 19mm rods, Israeli arms, and other bits ‘n’ pieces. 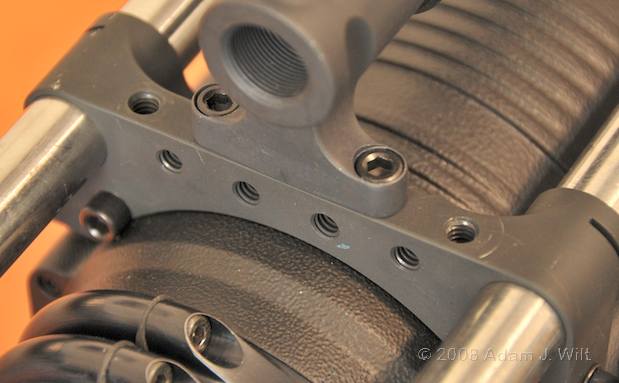 In the photo, the top handle itself has been removed (leaving its vertical mount, and the handle extension behind it) to make room for an Element Technica EVF mount, but E.T. also makes a set of risers which jack up the handle two inches. The risers allow easier gripping, especially with a top cheese plate installed (should we decide that we want one), and allow the entire handle to clear E. T.’s EVF mount.

As to EVF support, the RED EVF ships with a RED Arm, but no one seriously uses a RED Arm to support the EVF; it droops at the slightest provocation. Both Chater and Videofax have chosen the Element Technica EVF mount: 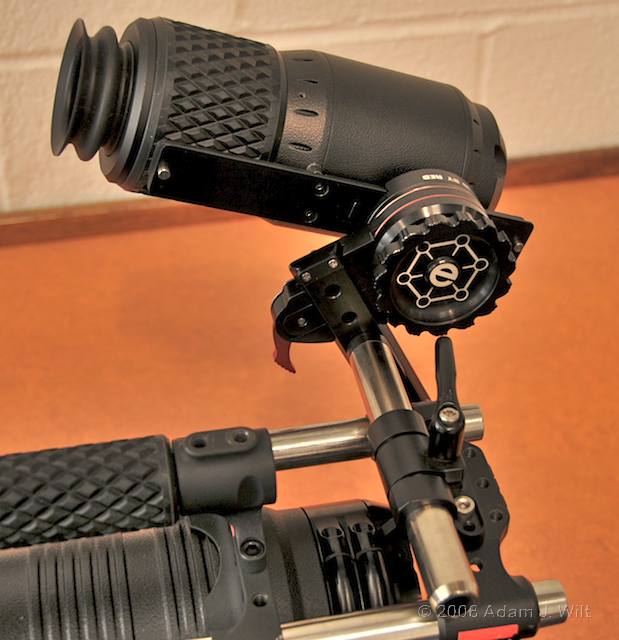 It allows flexible positioning back and forth, up and down, and side to side. The big round clutch mechanism looks like overkill, but it’s not: it’s designed to be adjusted once, after which you can simply grab the EVF and rotate it to the desired position. Nice bit of work, that.

SIM Video also has an EVF Mount built into their top handle (as well as bunch of other accessories).

Some folks are going the DIY route for EVF mounting, at considerably less cost, though with perhaps a corresponding loss in speed and ergonomic flexibility.

We’re not settled on which way we’ll go, but I’m leaning towards the E.T. rig. I’d be interested in hearing any arguments against it—aside from cost, of course.

Battery and drive mounting: RED’s own RED Cradle holds both battery and drive, but hard-mounts the drive, leading to dropped frames at the slightest provocation. Swapping the drive out, too, is a hassle: four thumbscrews have to be loosened to remove the drive for data wrangling, and the drive is finicky about sliding in its rails. Both Tim and I agreed that the RED Cradle wasn’t the way we wanted to go.

For the battery, we simply ordered up the RED Quickplate and RED Universal Mount. 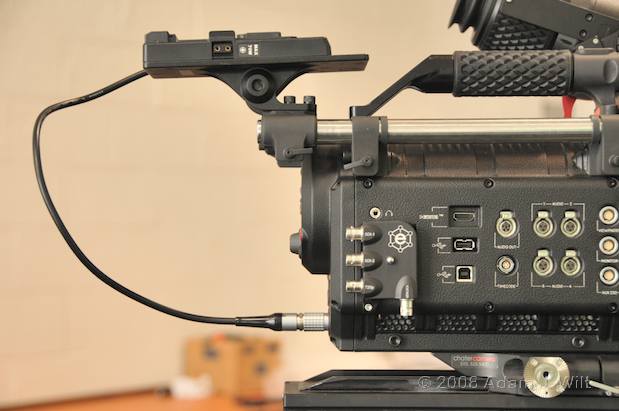 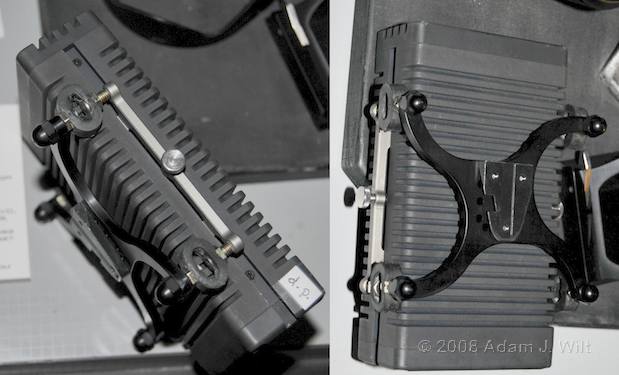 The Shockmount attaches to a “Speedy Clamp / V Lock” so the drive can be released at the push of a button. E.T. plans other attachments for the Speedy Clamp, too. 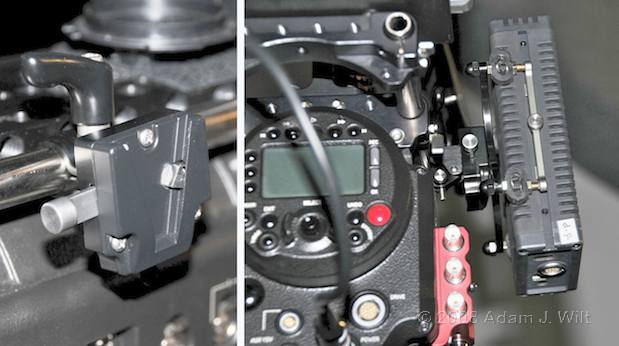 As far as a shoulder mount or handheld rig, most folks tell us that there really isn’t a good solution for the RED ONE at present, though RED would probably disagree, citing their Base Production Pack as a counterexample (perhaps with an added handle). Element Technica has a prototype rig that’s very attractive: 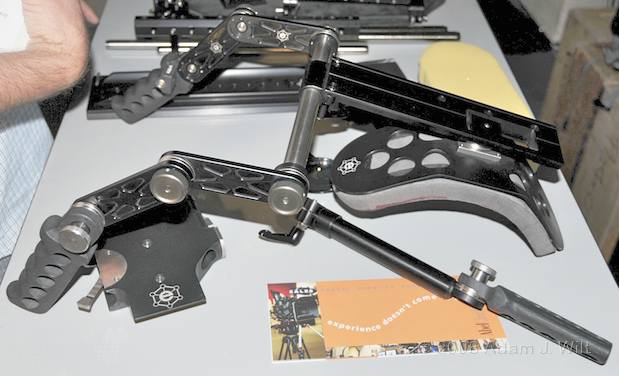 It uses a clutched shoulder pad that adjusts for sideways tilt as well as back and forth, so it sits on the shoulder perfectly comfortably instead of digging in. The right side handle has a pad for mounting the View Factor Origo remote start/stop button. Handles are easily repositioned, yet are very rigid once locked down. I think there will be options for fixed-length or telescoping arms, as well as the ergonomic grips shown or simple padded “motorcycle grips”; more will become clear when the rig gets nearer to delivery, which should be “within two months”.

There’s more detail on the E.T. handheld rig in this thread on reduser.net.

My only complaint with the rig is that the crossbeam holding the arms is of a fixed width, so there’s no flexibility in lateral spacing. The E.T. folks said that additional spacers would be available; I mentioned narrower spacing for tight quarters, and after an initial surprised look (wider is more stable, of course, so they’d been thinking about wider) they allowed as to how narrower crossbars might be made.

Video breakouts, to convert the fragile and glitch-prone mini-BNCs that RED used on the ONE? There’s the SIModified Breakout Box for CAN$500, the E.T. Video Break Out Box for US$580, and the Toys4RED IOP4R-1 which, for $1949, does a whole lot of things with audio and video connections, and allows remote connections up to 50 feet using a DVD-I cable to connect the $1149 BOB4R-1. All are worthy products; I’m leaning in the direction of the E.T. box, but we haven’t chosen one yet.

That gets us our basic support kit. To that we’ll add rods (probably the E.T. nickel-plated aluminum ones), and things to hang off the rods: a matte box and follow focus (Arri has some built like a tank, and priced accordingly; Red Rock Micro has a bare-bones but serviceable model that’s very attractively priced), wireless lens controllers/motors (BFD? Preston? View Factor?), and Previzion encoders.

And, of course, lenses. Back when we started considering this problem seriously, the lead time on a set of Ultra Primes was about two weeks. Then we got sidetracked by Maelstrom, and by the time we returned to RED stuff, the lead time had increased to three months!

Oh, well. Our RED CF cards and RED drives are still backordered, along with the EVFs, so it’s not like we’d start shooting with the REDs next week anyway…