FCPX can lose its links to media (and send clips offline) if the files are modified by another application.

I learned a hard lesson today about Final Cut Pro X after doing some roundtrip testing between FCPX and the newly released Resolve 8. That lesson was to be very careful when using clips that FCPX is referencing in other video applications. If some piece of metadata is modified in the file, even if the video stays exactly the same, FCPX may not be able to see it. Also, if you’re doing extensive audio mixing in FCPX be aware that the mixed clips won’t roundtrip.

Yesterday I posted an update alert about Resolve 8 and some roundtrip tests that use the new FCPX XML. That’s an XML into Resolve, grading done and XML out of Resolve, back into FCPX for final finishing … if that is desired. Some further work today brings up two other issues.

Be careful of externally modified files

The first issue came up when I reopend the roundtrip tests from the day before. There were a lot of clips offline:

This little test shoot had maybe 40 shots and I had used 8 or so for the test. All of those files were offline so that meant a couple of the shots in the real edit I was doing with the footage were offline too, not just the test edit.

What had happened was this: I imported several of the original clips into Avid Media Composer via Avid Media Access. That means I was linking to the same original H.264 Canon 7D media that FCPX uses. In doing this Avid modifies the metadata of the file in such a way that FCPX couldn’t relink to it when I reopened FCPX. If you look at the clips in the Finder you can see that the modified date has changed on those clips I brought into Avid: 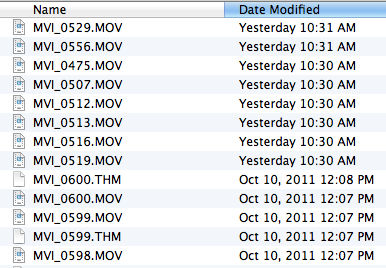 And these are the clips used in the Avid test edit:

But if you look in the FCPX media folder the alias files that FCPX uses to track the original media hadn’t changed from when they were originally created: 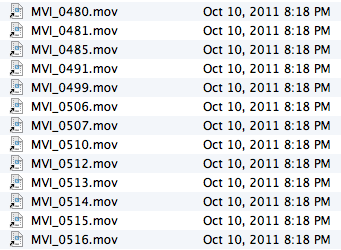 These are alias files as I chose not to copy the media into the Final Cut Events folder as I had already organized the clip on my main media drive.

Unfortunately there’s no way to force a relink / reconnect in FCPX. All the original lengths and time codes remain the same so in theory a force relink should work if only FCPX had such an option.

The same thing happened when I imported my roundtrip lists from Resolve into Adobe Premiere Pro. I imported both a Final Cut Pro 7 XML and Avid Media Composer AAF into Premiere Pro to see if it could conform the graded edit from Resolve. It worked great but PPro somehow modifies those files as well. When I opened FCPX back up those test conforms had gone offline. I could see this again when looking at the modified date of the files. As you can see in the image below, the original folder and files was created at 8:13 AM but then the files were modified (by Premiere Pro) at 10:23 AM:

I’m not really sure if there is anyone to blame for this more than it is something important to be aware of if working with FCPX. It would be nice if other applications wouldn’t modify the file metadata but it’d be even nicer if FCPX was smart enough to see these were the same clips with the same media with the same durations and time codes and be able to force a reconnect. Thankfully we don’t have to do the reconnection dance with FCPX but there are times when a force relink would be nice when we the editor knows better than FCPX.

Be aware of your audio mix on a FCPX roundtrip

The other issue I ran into was with the roundtripping of an audio mix. I went back and recut the edit that went offline and did an audio mix inside FCPX. I then sent that to Resolve and round tripped back to apply the titles and export with the audio mix. This is the timeline before Resolve: 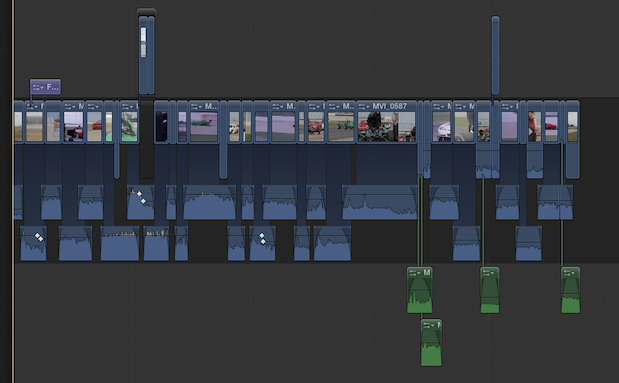 And this is the timeline after roundtripping back into FCPX:

You can see the problem in that all the audio mixing I did before didn’t translate into the after. I guess this isn’t really anyone’s “fault” as at the current time the FCPX XML doesn’t carry over all the audio data … at least not enough to do a roundtrip. But that begs the question of how do I get that audio mix into my color corrected sequence? In any other track based editor I would just copy/paste or edit in only the audio tracks … but as we know FCPX isn’t track based. I could export an audio only file but then I would have a mix down. Fine for this edit but not desirable in many cases. This is a place where Roles might come in handy but I didn’t take time to assign Roles as I was working. FCPX assigned all the audio Roles to dialog and I exported that as Multitrack QuickTime with audio only but FCPX (nor Quicktime Player for that matter) could open it.

The other idea I had was to use the Break Apart Clip Items to break the audio away from the video but this didn’t leave any of the audio editing intact: 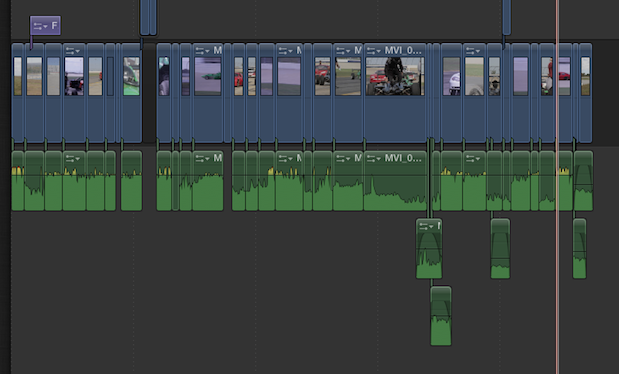 The solution was to use the Detach Audio command as that just dropped the audio down onto its own set of “tracks” for copy/pasting into the final graded sequence: 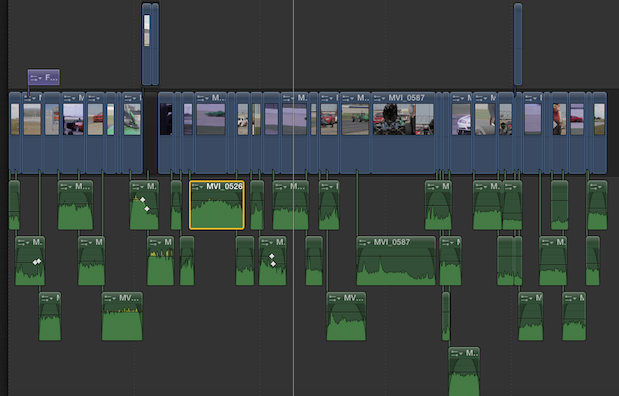 Thankfully that worked. It’s definitely an extra step to “detach” the audio for this copy/paste method but I could select whole groups of clips at a time so they didn’t have to be detached one at a time. In fact I’ve come to realize that while working in FCPX I seem to almost always end up detaching the audio for more detailed editing. I wish FCPX had a default command to edit clips into the timeline with the audio already detached.