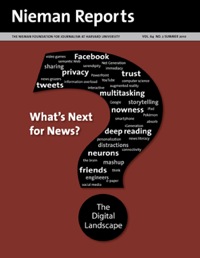 [Our sister publicationNieman Reports is out with itslatest issue, and its focus is the new digital landscape of journalism. There arelots of interesting articles, and we’re highlighting a few. Here, former Knight FellowAndrew Finlayson explains the role of journalists in the semantic web. —Josh]

In the movieTerminator, humanity started down the path to destruction when a supercomputer called Skynet started to become smarter on its own. I was reminded of that possibility during my research about the semantic web.

Never heard of the semantic web? I don’t blame you. Much of it is still in the lab, the plaything of academics and computer scientists. To hear some of them debate it, the semantic web will evolve, like Skynet, into an all powerful thing that can help us understand our world or create various crises when it starts to develop a form of connected intelligence.

Intrigued? I was. Particularly when I asked computer scientists about how this concept could change journalism in the next five years. The true believers say the semantic web could help journalists report complex ever-changing stories and reach new audiences. The critics doubt the semantic web will be anything but a high-tech fantasy. But even some of the doubters are willing to speculate that computers using pieces of the semantic Web will increasingly report much of the news in the not too distant future.