During my recent look at ProRes Raw here on PVC, I was also given a chance to take AJA’s latest I/O device, the $2495.00 Io 4K Plus for a spin. While I was not able to include the Io 4K Plus as part of my ProRes Raw review, I was able to take some time to delve into the latest Thunderbolt 3 revision to AJA’s original Io 4k. It was something I was looking forward to since it’s one of my favorite Thunderbolt I/O devices, despite having been announced at way back at IBC Show in 2013.

Aja has opted to retain the original size and design with some minor modifications to the case and I/O, mainly forgoing the stereo RCA output, instead now relying on analog audio monitoring via an optional DB-25 “octopus” style audio cable, while keeping the LTC and Reference ports and one SDI port dedicated to HD/ SD monitoring. Power is still being supplied via a 12V 4pin XLR cable, a connection ubiquitous on set, enabling the Io 4K Plus to go from being able to work in the studio to run and gun style editorial on location with power supplied by a 90W Cine-style battery when needed onset.

The biggest change to the Io 4K Plus was in updating the 4 BiDirectional SDI connections to accommodate support for 3G/ 6G/12G, allowing for a wide range of formats up to 4K 60p. They also updated the HDMI ports in accordance with HDMI 2.0a/CTA-861.3 specs, so HDR InfoFrame Metadata is correctly handled, assuring that editors will be able to properly monitor HDR content as either HLG or HDR10 with the associated metadata on both professional and high-end consumer HDR compatible displays. AJA just released DesktopSoftware v14.2 that enables HDR capture of Playstation and Playstation Pro content via HDMI2.0, allowing capture and playback for the gaming, e-sports, and character animation market segments.

Harnessing 4 lanes of PCIe Gen3 bandwidth within Intel’s Thunderbolt 3, allows the Io 4K Plus to deliver SMPTE standard I/O from SD to 12bit 4K HDR deliverables, cross-platform, for the highest levels of Tv and Cinema deliverables, all while separately supplying 10bit monitoring natively via DisplayPort v1.2, with support for dual 4K DCI capable monitors (4096×2160 @ 30fps) while access to your high speed storage arrays, assorted shuttle drives and other devices (up to 6 total) across a single buss.

Compatible on Mac’s with Apple’s FCPX and Pomfort’s LiveGradePro, the Io 4K Plus offers cross-platform parity on Windows and Mac’s supported as an I/O device in Adobe’s Premiere, Audition, Photoshop and After Effects, Avid’s ProTools, Media Composer and Symphony, the new Assimilate’s Scratch Player, along with solutions for live streaming and broadcast from Drastic and Telestream. The Io4K Plus enables a wider range of editorial options, giving facilities access to highest levels of I/O for their ever-growing HDR and streaming productions.

The Io 4K Plus met and exceeded all of my expectations, offering consistent performance whether I was playing standard def content, HD, or pushing the boundaries in 4K 60p HDR. With the Io 4K available for Thunderbolt2, Thunderbolt3 and broadcast-centric with IP connectivity, Aja continues to offer a wide range of quality products designed for tomorrow’s workflows.

There was a single drawback. As a Thunderbolt geek, I personally think all TB3 devices like the Io 4K Plus should provide enough power (more than 65W) via the USB-C connection to alleviate the need to cannibalize one of the Thunderbolt 3 ports on my laptop to keep it running.

{Editorial Disclaimer: I am known for a previous consulting arrangement with AJA Video Systems, I have not had any fiduciary or working relationships with AJA since December 2012} 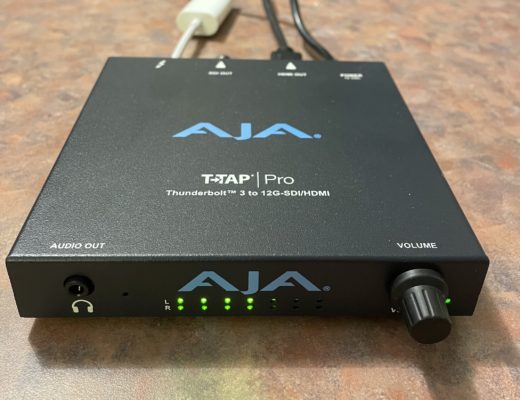 I think something that is lost in today’s remote editing from from home and everyone edits on a laptop... 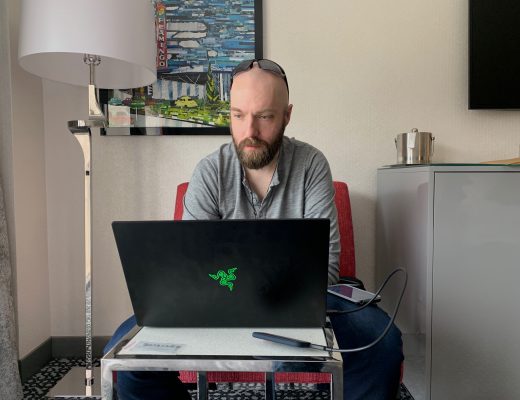 NAB Canceled. Everyone stuck inside their homes. One-on-one meetings canceled. It is a helluva time to try to deliver... 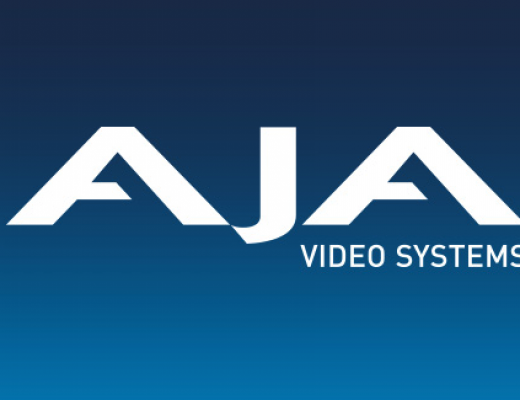 It’s the afternoon of March 2, 2020, and I was just sitting around beginning to get my NAB planning...