Sorry, the SC6-L is not basically the same as the original SC6. It’s radically different! 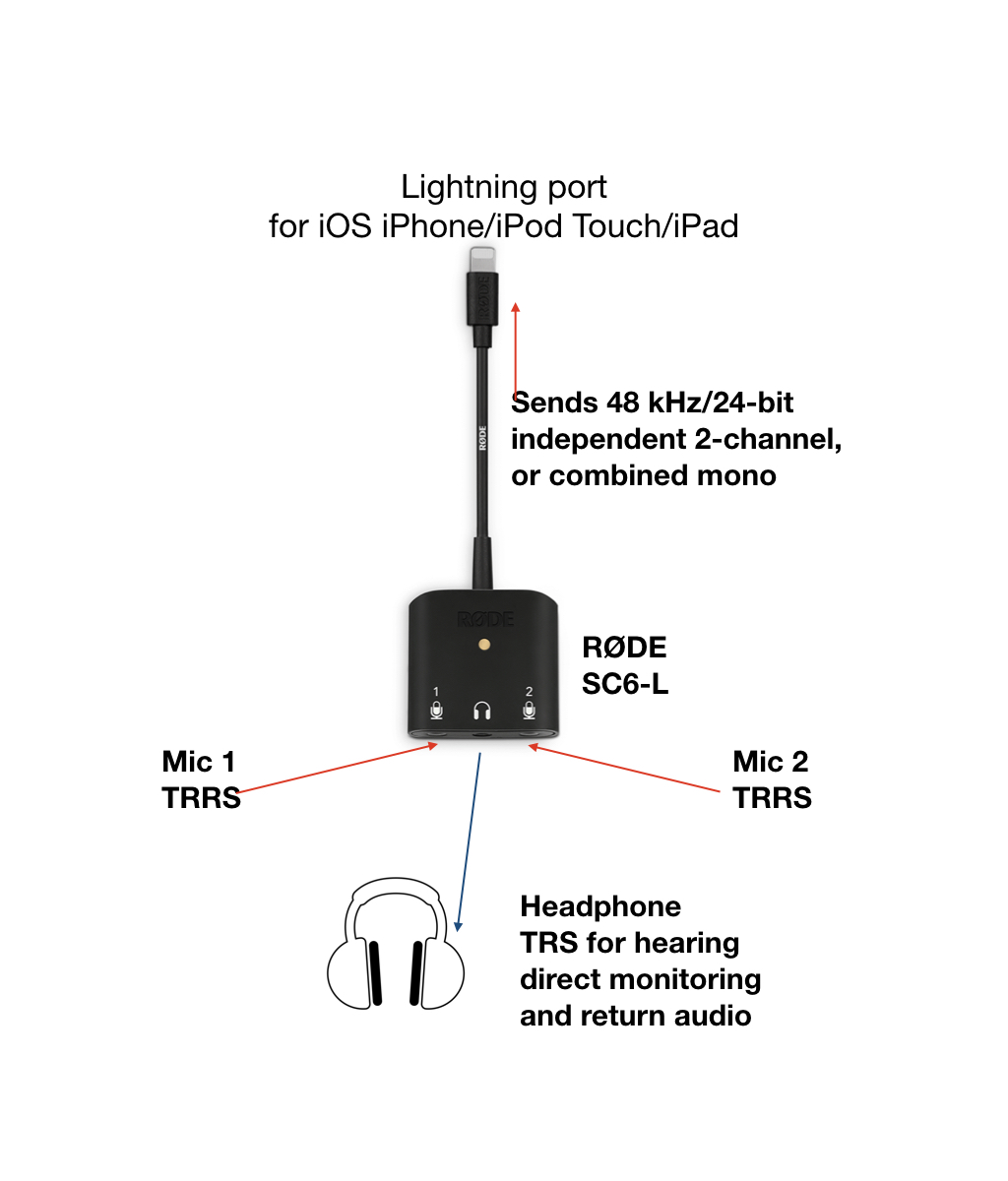 After publishing my first-look article called RØDE SC6-L: a game-changer for compact 2-track recording on iOS devices, I have heard several people inaccurately say that “it’s basically the same as the original SC6.” This article is to share 9 reasons why the SC6-L is so radically different. Ahead I’ll list the 9 differences and then elaborate on them. In an upcoming article, I’ll cover software improvements I’d like to see in the matching RØDE Reporter app.

Ahead I’ll clarify each statement. 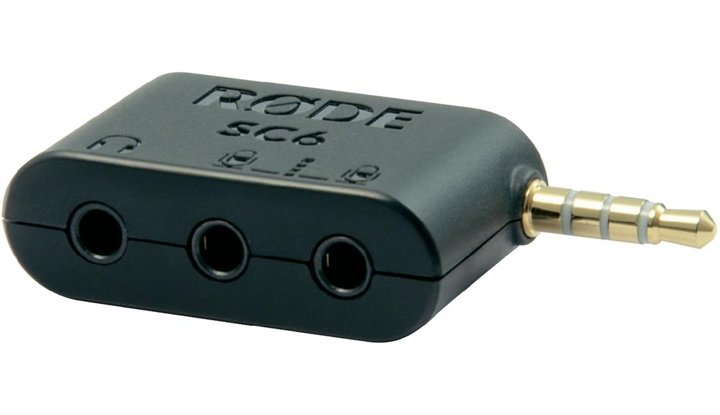 The original SC6 adapter, shown above

The SC6-L contains a sophisticated integrated circuit which performs several valuable functions, as covered ahead. On the other hand, the original SC6 is simply a passive bridging connection, like a few Y-cables carefully put together.

The SC6-L is unique to iOS; the SC6 can be used with nearly any device with a TRRS connection…

However, there is a trick you must know if you expect the original SC6 to work with a Chromebook, Mac or Windows computer: You absolutely must connect a TRS headphone and microphones to the original SC6 before connecting it to the Chromebook, Mac or Windows computer. Otherwise, the computer won’t recognize it and will ignore it. That’s because the computer must not only detect the TRRS plug inserted, it must also detect the impedance of the headphones.

That said, the SC6 will only combine the two microphone sources into a single mono signal, so multitrack and all of its power is not available with the original SC6, and you won’t be able to perform crossgating, as I covered in my 2017 article My multitrack crossgating audio workflow to eliminate crosstalk (illustrated below).

With the new SC6-L, you indeed can!

The SC6-L contains 2 preamplifiers; the SC6 contains none.

The SC6-L contains 2 A-to-D converters; the SC6 contains none.

Since the SC6-L contains 2 A-to-D (analog-to-digital) converters, it digitizes the 2 microphone sources into digital to send to the iOS device, bypassing the inferior A-to-D of the iOS device.

The SC6-L contains 2 D-to-A converters; the SC6 contains none.

The 2 D-to-A (digital-to-analog) converters accept a digital stereo signal from the iOS device and converts them to analog to be heard to the TRS headphone connected to the SC6-L.

The SC6-L contains a Lightning port; the SC6 does not.

This one should be obvious.

The SC6-L offers latency-free monitoring; the SC6 does not.

This means that you can hear yourself without any perceptible delay when you are recording through your headphones. As I have covered in past articles, self-monitoring is key for quality confidence, but hearing yourself with a delay when speaking is very distracting and fatiguing. With the original SC6, live monitoring depends on software in the host device and the amount of the delay depends upon the app and the processor of the host device.

The SC6-L enables 24-bit resolution audio on iOS; the SC6 does not.

Based upon the research I have done, the native analog port on (older) iOS devices does not support 24-bit input or output. A separate ADC (analog-to-digital) and/or DAC (digital-to-analog) converter is required to bypass those supplied by Apple. 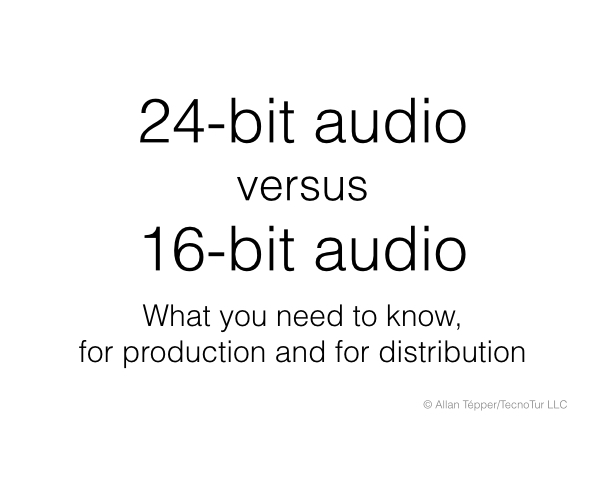 My first-look article called RØDE SC6-L: a game-changer for compact 2-track recording on iOS devices explains why the SC6-L is indeed one. On the other hand, although the original SC6 is great and works with more devices beyond iOS, it is not unique or new. Other Y-adapters have existed to accomplish the same thing, and IK Multimedia’s iRig Mic Lav has offered the same looping capability for some time. The iRig Mic Lav costs ≈US$50 by itself (Amazon — B&H) or ≈US$80 for a pair (Amazon — B&H). However, the use of the original SC6 or the mentioned iRig Mic Lav combines the two microphone signals in a single mono channel, so no multitrack or crossgating is available, as it is with the SC6-L.

Now you know why the SC6-L costs either US$79 (B&H) if you already own compatible microphones, or US$199 in a kit (B&H) with two SmartLav+ lavalier microphones. Please don’t say that the SC6-L is basically the same as the original SC6. That is a silly statement. It’s radically different. 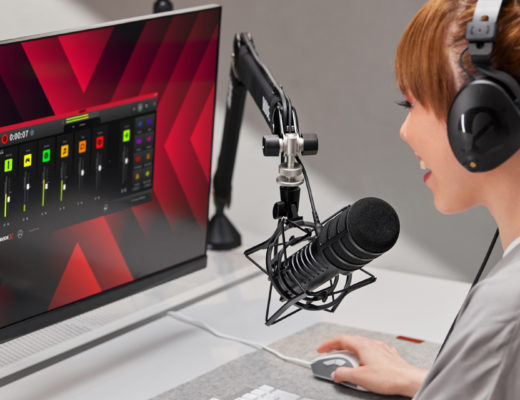