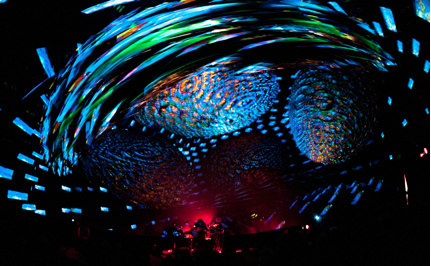 Steve Roach and Audri Phillips perform in The Vortex Dome

As a long time entertainment industry producer and creator, it’s been so exciting to be a involved in the new media technologies and innovative narratives that are emerging on the entertainment landscape.  These technologies are giving us new ways in which we can extend our storyworlds, express our creativity and expand the way we share our stories and artistic projects.

My partner, Ed Lantz, President and CTO of Vortex Immersion Media, owns and operates The Vortex Dome, a 50 foot R&D cinema dome studio space located at Los Angeles Center Studios, an independent jewel of a studio just north of the 110 freeway and east of the 10 in downtown LA.  LACS is the home of MAD MEN and several other television shows, as well as a favorite base camp for big feature films that shoot in downtown LA like DARK KNIGHT 2, etc.  We’ve had offices on the lot since June 2010 and have been building a growing collective of artists and storytellers eager to work in the 360 fulldome immersive space.  It’s an exciting new frontier for storytellers and artists and the opportunities in the fulldome format are only limited by one’s imagination and skillsets.

The fulldome venue represents the next generation of cinema and live performance space.  It's been maturing as a format in the planetarium space but is now beginning to emerge on the media and entertainment horizon as a new venue platform.  Artists love the space and have been creating content only really able to be seen at various fulldome festivals popping up around the world, a few progressive planetariums, and in The Vortex Dome theater.  China, and countries in the Middle East, also see the powerful potential of the fulldome space and are beginning to build 360 immersive theater venues for showcasing entertainment and art – not just science, and a vital and growing trade association, IMERSA, exists to serve the fulldome format and creative community as well. 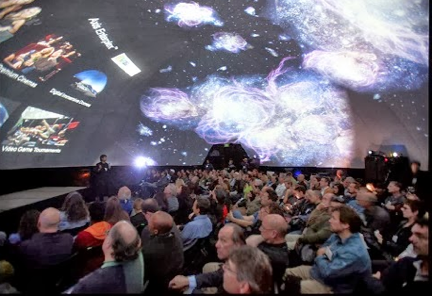 Createasphere presented a workshop taught by Ed Lantz, of Vortex Immersion Media, on “Fulldome 101” at their ETE in 2012

I've been involved with creative development and production for the fulldome and was recently fortunate to produce and present a trilogy of 360 immersive music+art concerts in the Vortex Dome called “Ultra Immersive:  Deep, Deeper and Deepest” with famed ambient music innovator, Steve Roach, and talented 360 visual artist, Audri Phillips, who is also a participant in the Vortex Immersion Media and c3: Center for Conscious Creativity AIR: Artist In Residence Program. 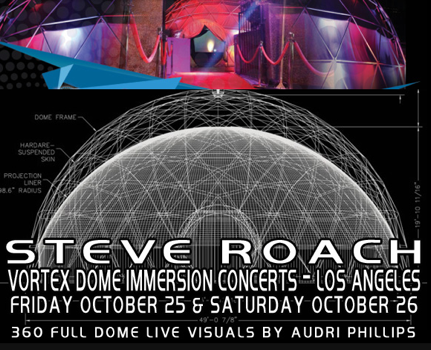 As a pioneering cornerstone of ambient-atmospheric-electronic music, internationally-renowned artist Steve Roach has dedicated over three decades to exploring myriad soundworlds that connect with a timeless source of inspiration.  From the expansive, time-suspending spaces reflecting his spiritual home in Arizona to the fire breathing, rhythmic-shamanic expressions woven from all things electric and organic, Roach has earned his position in the international pantheon of major new music artists through a long list of groundbreaking recordings, fueled by his prolific nature and uncompromising approach. The core of this innovative world of sound has been nourished by years of dynamic live concert events in many extraordinary worldwide settings, further enhancing the emotive, cinematic soul-stirring depth of his music.

Steve has collaborated with numerous visual artists since the beginning of his career in Los Angeles starting in the early 1980′s.  During his 11 years living on edge of innovations with sound and vision in Los Angeles it was common to see “Vuscians” set up on the same stage improvising with video synthesizers and using projection systems of that era. Fast forward to 2013, hundreds of music — visual concerts worldwide the Vortex Dome Immersion concert experience was a homecoming for Steve Roach who has not performed in Los Angeles since the early 1990s.  Joining Steve to carry the visual torch into the now is 360 fulldome visual artist and VJ, Audri Phillips, who created original material for the event and presented it live in the moment interactive with the Steve’s space and time altering soundworlds. 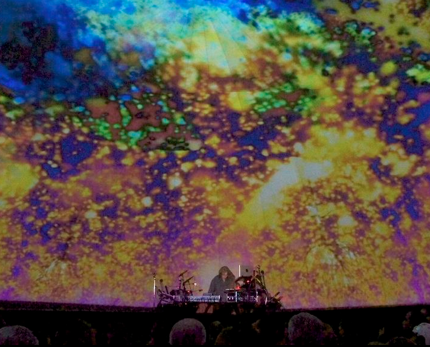 “With his distinctive melange of analogue and digital synthesisers, acoustic instrumentation and highly imaginative soundscaping, Steve Roach is a giant in modern ambient and one of the most respected electronic musicians in the world. He’s been noted for the deep inspiration he draws from the European electronic tradition, and you can certainly hear the legacy of German psychedelic electronica and spacemusic throughout his work; sometimes not in melody, but certainly in its atmosphere and large, reverberant spaces. Another major source of inspiration for Roach is desert wilderness, including the starkly beautiful deserts and wide open spaces of his Arizona home which continue to colour his music to this day.”
Mike Watson – AmbientMusicGuide.com – Australia 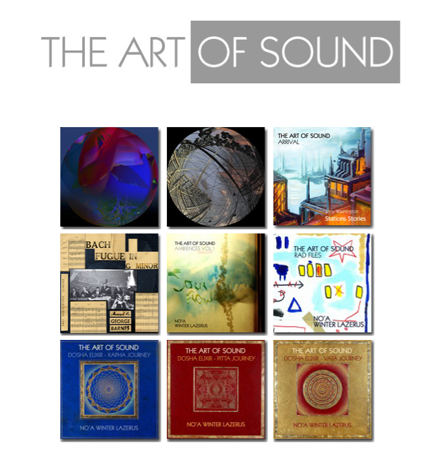 This performance was presented under the banner of my 360 music+arts label, The Art of Sound, which I was inspired to create after having served as VP of Programming for the innovative VoD visual music channel we launched on Comcast in 2006 called The Harmony Channel.  I got bit by the “non-cognitive” form of narrative called visual music and fell in love with the marriage of amazing art and powerful music.   In addition to producing albums, The Art of Sound specializes in immersive experiences by bringing the visual artists and musical artists together to do live performances.  Our artists have performed in such venues as; Fred Segal’s retail store, art galleries, a conference exhibition hall, and as of late, The Vortex Dome Theater.  We’ll also be creating fulldome visual masters from these experiences that can be shown in planetariums, at fulldome festivals, and in dome spaces like ours.

This label was created under my production company, Bridge Arts Media, LLC, because of my love and passion for music and also for visual music.  When designing IP and projects, I add the potential of the what this music+arts label can offer into the strategic mix as the fulldome is also a space to launch original IP/storyworld concepts that can be artfully extended into the world.  The label creates albums, is building a collection of original art that can be repurposed and sold, offers live and fulldome experiences, and we can create visual music DVDs, electronic downloads and also fulldome masters.

Though not on my label, one of the projects that we collaborated on to workshop in The Vortex Dome through Vortex Immersion Media and c3: CreateLAB was BollyDoll by artist and musician, Amrita Sen, with composer, Anthony Marinelli.  The piece started as a series of Amrita's paintings that were then projected and animated onto the fulldome space with original music and live performers evolving a story into a fullblown immersive musical.

The BollyDoll show received interest from a Vegas producer and is hopefully heading to Broadway in the near future.  Amrita has also created a line of clothing and accessories which launched in Macy’s this past year and she has an ebook and other media in development.  As we continue to define and understand the nature of transmedia and cross platform, projects like these are great examples of the power of an IP and or storyworld to evolve.

Immersive interactive storytelling and experiences are growing in popularity, and now storytellers and creators can add the fulldome format venue to their creative palette.  It’s the vast new frontier and we’re excited to share it. 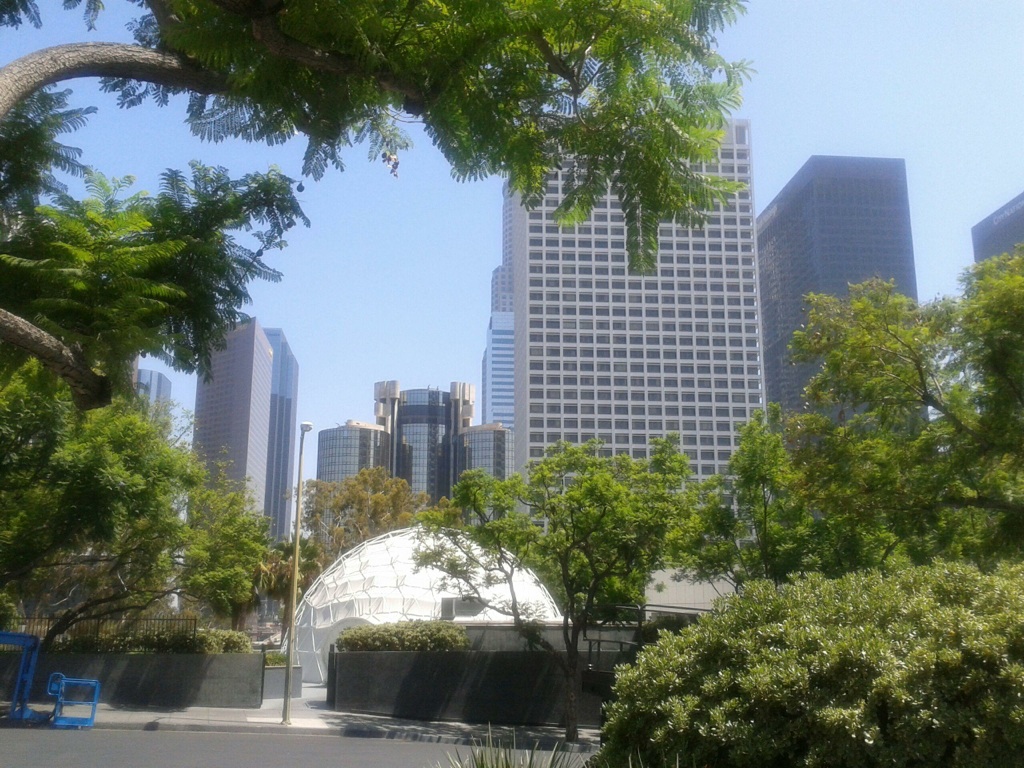