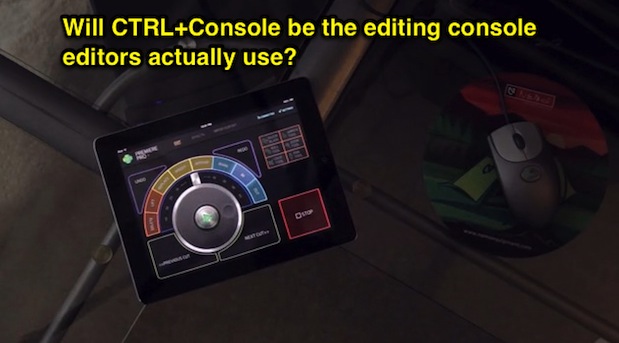 This is a very cool looking Kickstarter campaign that popped up a few days ago. CTRL+Console is an iOS-based non-linear editing controller that looks to be built from the ground up specifically for the task of video editing. The interface looks quite futuristic and well designed but unfortunately its downfall might be the iPad itself.

First I want to say that I really don’t want to poo-poo an enterprising entrepreneur’s dream/vision as they try to bring a new product to market. I love the idea of an affordable editing controller sitting alongside my keyboard that actually brings some real value to the technical side of our craft. I really hope this product comes to market as the only way to know for sure how well it will work is for the editor to try it firsthand. I backed the product on Kickstarter so now it’s wait-and-see when/if it gets funding.

That said the app is most likely to end up in the serious editor’s rarely used iOS folder because the lack of any kind of tactile feel on the iPad’s screen means you’ll spend way too much time hunting for the right place to touch and not enough time editing. If you watch the Kickstarter video closely you can see how often the developer of this product has too look over and down at the iPad as he’s working in Adobe Premiere Pro. I’ve tried a lot of different iPad apps alongside different NLEs that give you virtual buttons on the iPad screen and they all suffer from the same problem: you have to work too hard to use them. Even with big, fat iPad buttons I still find myself having to constantly look over to the iPad to make sure I touch the right one.

Having to look away at the keyboard or at some controller device seems like such a trivial thing but it’s quite an important consideration when it comes to efficient editing. While the Kickstarter campaign mentions that “keyboards were designed for typing, not video editing” my opinion is keyboards work very well for editing since most editors already know how to type so you can leave your hands on the keyboard and achieve a lot of edit tasks without ever looking down. Couple the raised nibs of the F and J keys found on most keyboards with the well thought out Avid Media Composer keyboard layout and you can get a lot of work done … fast. I long ago remapped my FCP7 keyboard to be more Avid-like and I feel it gave me years of speedy use. That speed comes back to the instinct my hands have on the keyboard and the fact I don’t have to constantly look down at them.

The newest iPad app I’ve been using is called Actions. It’s nice in that it provides 15 big, fat buttons on the iPad screen for various desktop applications. While it works well and works fast I still have to look down at it when I want to use it. About the only post-production related iPad app that I can remember being truly intuitive was Nattress’ Chromagic. It was a color grading plug-in for Final Cut Pro 7 that used simple finger gestures on the iPad screen for color grading tasks. You could use the whole screen and it depended on the number of fingers used and the gestures you were doing to make the grades. It took some time to master but its design meant you could reach down and use the iPad without having to look at it all the time. It’s a shame Chromagic came out right when FCPX came along as it probably didn’t get a fair shake. I wish Nattress would bring it out for Premiere Pro CS6 or Avid Media Composer.

The most famous editing controller is probably the Lightworks Console. This thing was always a favorite of every Lightworks editor that I knew and is sure to be an important piece of the new Lightworks that is clawing its way back into the non-linear editing consciousness.

This video is old but it shows the Lightworks console in action.

Avid makes the Artist Transport editing controller but I haven’t used it in real world editing, only played with them on a few occasions. [If you’re listening out there Avid send one over for review!] The Artist Transport is a one-handed control surface that provides jog/shuttle controls as well as a ton of buttons in a well made piece of hardware. The bullet points look nice:

This demo above is when the unit was owned by the Euphonix company. Overall the hardware is still the same though the control software might have changed since that video was recorded.

By far the most common edit controller out there is the Contour Shuttle PRO2. You can find it well under $100 and it gives you a lot of useful buttons as well as jog/shuttle controls. The software driver comes with a ton of predefined application key sets but looking through the list they sure seem out of date.

I’ve used a Shuttle PRO for years and it is nice to have on the desk. I find the most useful thing to be the buttons that it provides as I rarely use the jog/shuttle. In fact I’ve changed the job wheel to actually zoom my editing timeline in and out instead of actually jogging the playhead. I’d much rather use JKL or the arrow keys for that.

That brings us back to the original topic of the CTRL+Console Kickstarter campaign. I can’t help but think how so many of these iOS apps have been just a novelty. Use it for a few sessions and then realize the app doesn’t add any real functionality over and above the keyboard interfacing with the NLE. I like to think CTRL+Console will add value that no other iOS app has achieved since it’s designed for editing from the ground up. But as I watch the demo it really feels like it’ll suffer from the iPad itself and its smooth glass surface. You have to look at the thing to see what you’re doing and time looking down from the NLE means times you’re not editing. I really hope CTRL+Console meets its rather lofty goal of $35,000 (how much does it cost to develop an iOS app anyway?) so we can all try it out. If you’re so inclined please join me in backing the project. I wish Jeff Chow all the luck in the world and I look forward to installing CTRL+Console on my own iPad. I just might find I don’t use it much.

Check out part 2 of this article that I posted after CTRL+Console discussed adding gestures to the interface which will instantly make it much more usable.