While the design might end up being controversial, if it can export a timecoded list back to a desktop NLE then that’ll be nice

Ever since iOS came along and began allowing custom apps there have been quite a few video editing applications on Apple's mobile touch platform. Along came the iPad and then the idea of a useful NLE for the touchscreen began to take shape. We've had iMovie for a while (and a lot more lesser editing apps) but it wasn't until Avid came along with Avid Studio that we thought that something truly useful for the professional editor might be possible. Avid sold their app to Corel and my dream of an offline editing tool seemed to be dead. But that dream may still be alive with this coming iPad app called TouchEdit. 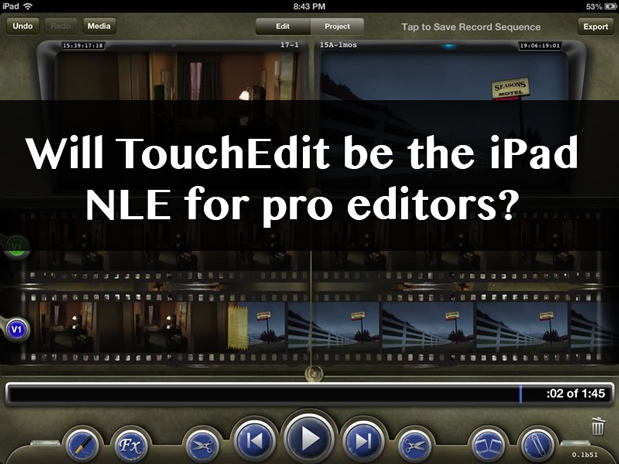 I had no idea that another iPad video editor was in the works until I saw a mention of TouchEdit on Twitter. Looking around their website shows that one of the creators is none other than Elf and Iron Man editor Dan Lebenthal. That's an exciting name to have behind an editing product. As of this writing the app isn't on the App Store just yet but on December 17 it looks like it was submitted:

We officially submitted our app to Apple this Sunday!!!!

That sure does seem to take a long time for Apple's approval! In the meantime we can check out Touchedit's YouTube page to look at a few videos of the app in action. I'm not sure why the videos jump from number 4 to number 6 but the first two that first caught my eye were the ones about the actual editorial process within the app.

First was the editing basis which are described below:

That left me with questions as to how you actually mark IN and OUT points. That's part of video 3, Grease Pencil Mode:

After watching a couple of those videos I'm willing to bet that one of the more controversial topics that will revolve around TouchEdit when the app finally goes live is the overall design of the app itself. While the idea of it allowing for editing conventions like 3-point source/record style-editing is very nice to see in an iPad app that might actually be usable in a professional editing workflow I'm sure there will be many who are put off by the skeuomorphic design desisions and the overall look of the app. I'll reserve judgement until I actually play with the app. I don't mind if the footage looks like actual film strips or if there's old film-splicing mechanics in there as long as it works.

One intersting thing to see was FCPXML listed as a specific export function: 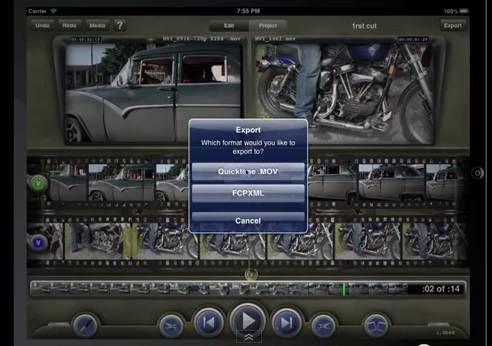 We know that the creators were Avid Media Composer people, not just because Dan is a feature film editor but because much of TouchEdit looks to be Media Composer inspired. It the app really will track timecode (as they say) then I hope we could see some type of Avid-friendly export as well, like AAF. Back to that dream of assembling a rough edit on the couch and sending that list back to Media Composer to relink to my original media. This quote from the TouchEdit website gives me hope: “The app can also carry metadata, including timecode, and can output specialized lists to collaborate with other editing systems.“

UPDATE: It seems that an Avid AAF workflow is in the works:

@editblog @mediacomposer we are working on a Media Composer work flow. AAF is in the works and will be up for our 1.1 release.

As does this graphic:

There's an Avid logo there so we'll see when it ships. And there's this:

TouchEdit is a frame-accurate video editing app for the iPad that uses timecode to export the project to other non-linear systems.

Impressive. In the meantime, as we wait for TouchEdit to hit the App Store take a look at the other videos from the folks at TouchEdit.