The big conference is coming up fast. I’ll be teaching some classes again this year.

It’s that time of year again and we are only a month away (or less) from the 2013 National Association of Broadcasters convention. I’m sure this year will be another big year with lots of new hardware, software, toys and gizmos introduced for everyone to fondle and ogle over. In year’s past I’ve tried to catalog some of the happenings in a blog post so here is the NAB 2013 edition, though not as detailed as 2012. I’m happy to again be leading several classes at the Post|Production World conference. This year includes sitting on end of day Hot Panels where we’ll discuss all aspects of editing and post-production. Oh, and there’s those evening parties and gatherings to look forward to as well. If anyone has any events to add post them in the comments below or email me and I'll add them here.

This year I’ll be teaching a few handy Avid Media Composer classes and one Adobe Premiere Pro class. I’m also very excited to be sitting on three of the new Hot Panel sessions that will be wrapping up each day of Post|Production World. These topic-focused discussions should be quite lively as is usually the case when you get a bunch of post-production folks sitting around talking post-production. If you plan on attending the Post|Production World conference this year I hope to see you in class! Click on the links below to read full descriptions of the classes, room numbers and the other people involved in the panels. 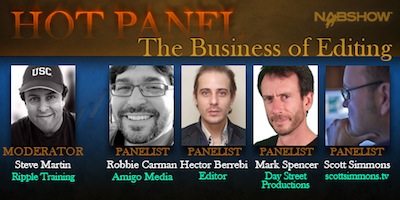 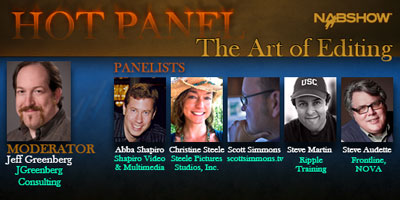 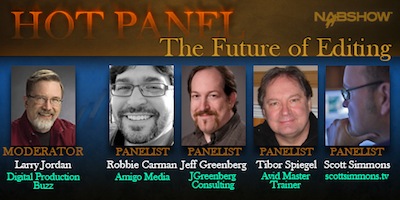 Monday night, April 8 will be the annual MediaMotion Ball. This is a great event as it’s a full sit-down dinner and it provides a lot of time to mingle and chat. I think last year I spent so much time talking that I almost forgot to actually sit down and eat. Tickets are $49 and well worth it. It’ll be held at the Monte Carlo hotel and doors open at 5:30. Dinner begins around 7:20 so that means it’ll be a rush over after the Business of Editing Hot Panel! Check the website for all the details.

Of course no NAB would be complete without the SuperMeet and NAB 2013 is no exception. This year the event goes back to the Rio hotel so be ready to get the carpool or cab ride together to get there. While the agenda hasn’t been posted as of this writing a look down the “world famous raffle” prize list shows some good stuff including a $29,995 DaVinci Resolve package. That’s becoming a yearly giveaway! Grab your tickets here and if you buy/bought before March 12 you get them for $10. 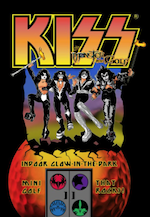 That’s a mouthful to say but apparently it was quite the fun event in 2012. Click on over and sign up for the 2013 event as I’m sure it will be equally as fun. Tickets are $15 so it’s a very affordable night of fun. But beware it doesn’t start until 10:00 PM so if you have an early flight in that Sunday morning you may get tired. I hope to make it this year. I like mini golf. I like KISS. What more could one ask for?

If you’re into the RED scene then it looks like they will be having another Sunday event in that they “re partnering up with the NAB folks for the Content Creators party the night before the exhibits at the Hard Rock Hotel 8pm – 10pm @ Body English Night Club at the Hard Rock.”

Details are a bit scarce as of this writing but it does say there will be an open bar and to “make sure you have your NAB badge.” This was announced on the REDUSER forums so keep an eye open over there as there will probably be more info published as NAB gets closer.

There's the date and time above. You can register here. The best thing about it sounds like the bullet points:

– There's 150+ Pinball Machines to choose from at The Pinball Hall of Fame
-We're covering an open bar
– Free treats.
-We own an ice cream truck for the evening.
– Absolutely amazing company