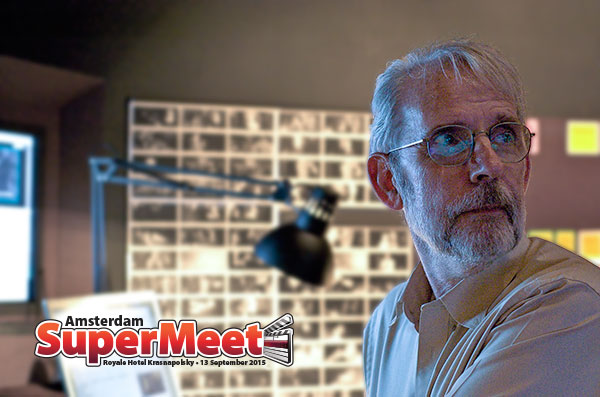 IBC 2015 is upon us, which means it’s time to start talking about the next SuperMeet, and this year is going to be special. The Eighth Annual Amsterdam SuperMeet is going to take place on September 13, 2015 and three time Oscar winning film editor Walter Murch will be the featured presenter. SuperMeet organizers Michael Horton and Daniel Bérubé have previously talked with us about what makes the event so unique, and why it’s really a must-attend for anyone who’s going to be in Amsterdam. Details about this year’s event are below.

The Creative Pro User Group Network (CPUG Network) today have announced the Eighth Annual Amsterdam SuperMeet, to take place on Sunday, Sept 13, 2015 at the Hotel Krasnapolsky in the heart of Amsterdam. Doors open at 4:30PM (16:30) with the SuperMeet Digital Showcase featuring 20 software and hardware developers. SuperMeet Presentations will begin at 7:00PM (19:00) and continue until 11:00PM (23:00). Tickets are on sale online for the earlybird price of Euro 10.00 each plus ticket fee and Euro 7.00 for students and Teachers with valid ID. Earlybird sales end August 13, 2015.

“Happy to be back on the SuperMeet stage after a 4 year absence,” states Murch.

Walter Murch has been editing picture and mixing sound in Hollywood since starting on Francis Ford Coppola’s film THE RAIN PEOPLE (1969). He co-wrote, sound-edited and mixed George Lucas’s THX-1138 (1971), and then supervised the sound editing on THE GODFATHER (1972), sound-edited and mixed AMERICAN GRAFFITI (1973) and THE GODFATHER: PART II (1974), got his first Academy Award nomination and won a double BAFTA for picture editing and mixing THE CONVERSATION (1974), won his first Oscar for APOCALYPSE NOW (1979), and an unprecedented double Oscar for sound and film editing for his work on THE ENGLISH PATIENT (1996).Murch is currently in London working on another movie.

The full agenda will not be announced until shortly before the event date, however the producers have stated that there will be USER driven presentations by Blackmagic Design and Adobe and others.

Rounding out the evening will be the always wild and fun “World Famous Raffle,” where thousands of Euros worth of valuable filmmaker-related prizes, will be handed out to dozens of lucky winners.

Doors will open at 4:30PM (16:30) with the SuperMeet Digital Showcase featuring 20 software and hardware developers including Adobe, Blackmagic Design, iZotope, Audio Network, Boris FX, CoreMelt, GenArts, Intelligent Assistance, Imagineer Systems, HighPoint, Red Giant Software, Lumberjack Systems and many others to come. Here, attendees can enjoy a few cocktails, mingle and party with industry peers, network one on one with leading manufacturers and learn about the latest trends in collaborative editing workflows for post production and broadcast markets.

Tickets are on sale for the “Earlybird” price of only Euro10.00 each (Earlybird tickets expire August 13) for Adults and Euro7.00 for students and Teachers and are on sale online only. It will be Euro20.00 each at the door. Food (snacks) and drinks will be available throughout the evening. To purchase tickets online and for complete daily updates on the SuperMeet, including directions, transportation options, and a current list of raffle prizes, visit the SuperMeet web site. http://supermeet.com