Some free, some cost, always useful

It’s that time again where we take a look at a number of tools that an editor might find useful. Some free, some not, some software, some not … and a table.

This little tool called Markers has been a life saver on a recent project. I had a job were I had a ton of long interviews and I had to log the questions the interviewer was asking. These questions needed to be use both for organizing the edit but also had to go into a spreadsheet. Typing each question twice (and even copy/pasting) was taking way too long so Markers to the rescue.

What Markers does is take an FCPX XML and convert your markers into a text file, complete with timecode on each line. There’s no interface, only an option to “Use Compressor error calibration.” This little freebie app comes from github and was created mainly as a way to get marker data to Compressor.

While Markers the app worked flawlessly the big problem came from a horrendous bug in FCPX. Often, seemingly quite randomly, FCPX would place “phantom” markers in the FCPX timeline. You wouldn’t see the markers but using the Go To Next / Go To Previous functions in FCPX would stop the playhead where there wouldn’t be a marker. Sometimes tens of hundreds of times. Unfortunately those “phantom” markers would show up in the timeline XML export. This is noted on the github site:

Due to an issue with the way FCPX deals with unused clips, It’s recommended that you create your markers as the final step in your workflow. Not doing so can result in markers being duplicated.

The workaround that worked for me was to export the XML from the Event and not the timeline. I was never able to determine why these“phantom” markers showed up. That’s one bug I hope gets squashed. 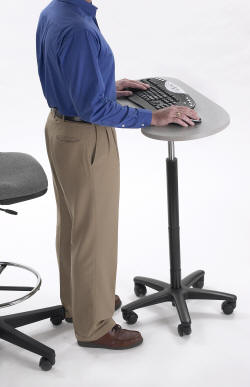 This isn’t a software plug-in or a hardware product but rather what might be a nice addition to you edit suite in terms of your health. With all the talk these days of how unhealthy it is to have a job where you sit all days, editors should constantly be on the lookout for ways to keep moving. Short of a treadmill desk standing can be beneficial. If your’e not in a position to have a full stand-up desk you might try something like the OfficePro/10 from the Adjustable Keyboard Podium company.

My buddy @avidzombie uses one of these and on a recent job I worked with him I got a taste of it as well. Being a wheeled table he always had the akp as an option to whip out at any given point in the day to to get out of the chair. This little table is sturdy, well built and beats a cheapo laptop stand from Office Depot by a long shot. You are correct that a stand like this won’t raise up your monitors but if you are able to tilt your monitors up a bit then it’s an entirely viable option to get on your feet for a few hours a day. Since the monitors won’t raise up with it I’m guessing looking down at them won’t be perfect posture and you may have to up the font size of your bins (provided you’re using Avid that is) if you have bad eye sight but after using this thing myself I’m convinced it beats having to sit all day. A bonus is clients seem to like that stand up option as well.

Here’s an ugly old video from the AKP company as a demo, and fortunately the product I used is way more modern and nice looking than their very old look website:

The useful tools for the folks at Intelligent Assistance have recently released Sequence Clip Reporter for Adobe Premiere Pro. This was long a staple in the Final Cut Pro 7 world so it’s nice to see this come to PPro. Since Sequence Clip Reporter works all its magic out of an XML file it seems only natural to bring the tool to Adobe’s NLE. From what I understand the XML that PPro generates isn’t quite a clean as that from FCP7 so this version of Sequence Clip Reporter might be working harder under the hood.

Just as the title says Sequence Clip Reporter will give you a report that provides what might be a ton of useful information about an edited sequence. Here’s the list from the website:

At $99 it will probably save you a lot of time if you’re needing to extract that kind of information from a sequence. Editors and Producers alike might find good use. 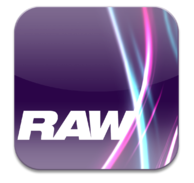 If you’re one of those Magic Lantern DSLR hackers then you might be interesting in this free app from the Mac App Store called RAWMagic (Mac App Store link). This little tools converts the Magic Lantern RAW files into CinemaDNG files. Seems like it would be even more useful if it could convert to ProRes.

I haven’t used RAWMagic and know nothing more about it beyond its existence but there’s a rather lengthy forum post about it over on the Magic Lantern website.

If you really want to know more there’s a 10 minute workflow demo over on YouTube. It’s in French but if you have to watch and don’t speak French you can enjoy the YouTube caption translation feature to get some info from it … as well as get a good laugh out of some of the translations.

And if you haven’t heard there’s been some more movement on getting Magic Lantern working on the Canon 7D.

It’s hard to have a Useful Tools column without mentioning something new in the FxFactory platform of plug-in effects so here’s what I’ve made note of most recently.

Many of us who use FCPX really miss the good old 3-way color corrector from FCP7 as the weird Color Board replaced the more traditional color wheels. A developer called Hawaiki has made an attempt to bring those back with Hawaiki Color. It’s an interesting implementation of the 3-way color corrector and anyone who has used a 3-way will recognize the controls. But there’s a number of other controls as well beyond just 3 color wheels and three sliders. The plug-in is located in the Effects Browser but there’s also an instance of Hawaiki Color in the Titles Browser which means you can use that one like an adjustment layer and put a single correction across a lot of clips at once.

How does it work? Quite well for the most part, as anything remotely normal will be better than the Color Board for many. The interface is clean and easy to understand after a read through the user manual. Like many FCPX plug-in effects you’ll do most of the best work using on-screen controls (exposure, temp, color wheels) but you’ll need to return to the Inspector for certain functionality like a legalizer, split-screen views and committing the final grade.

Like all the other FCPX plug-ins with on-screen controls, those control overlay displays will be seen in the internal video scopes of FCPX as well as an external signal from video hardware. Of course there’s Inspector controls to turn that interface on and off to properly see your image so. That is a lot of mouse clicking that really is unnecessary so let’s hope someday Apple sees fit to not show interface controls in the video scope signal. I can’t see any scenario where that is actually desirable. There’s not even a way to map a toggle to a keystroke to turn off the interface when you’re done. And you HAVE to turn off the interface when you’re done via the COMMIT toggle. 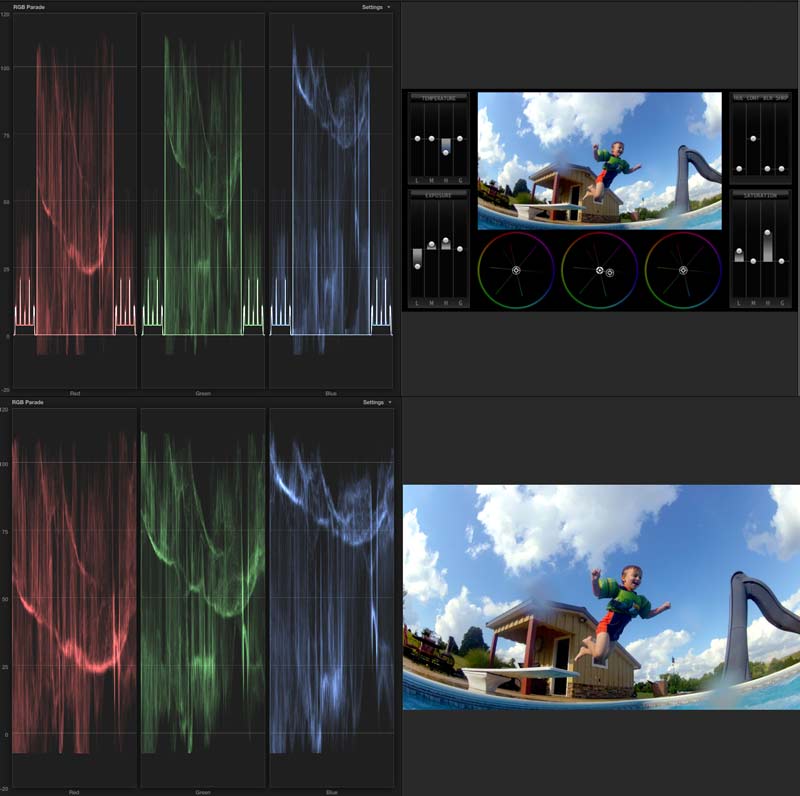 You can see the elements of the Hawaiki Color interface being reflected in the video scopes. While the scopes are still usable this certainly isn’t idea for serious color grading work as it makes some of the subtleties of the trace hard to make out.

At $49 Hawaiki Color is a pretty good deal considering the controls you get. Hawaiki Color really is a joint effort between Tokyo Productions and Lawn Road, both of which make other FxFactory plug-ins including Color Precision from Lawn Road. There’s really a lot of color correction options all throughout the FxFactory list of tools.

And speaking of developer Lawn Road, these guys have also come out with a masking tool for FCPX. Fast Mask is, like the name implies, a quick way to make a mask on a clip. There a version of the effect for basic masking as well as one with some color correction controls built in. When they say fast they are correct as the tool is a joy to use. While it’s lacking a pen tool for freehand masks there is a wide variety of shapes to choose from. 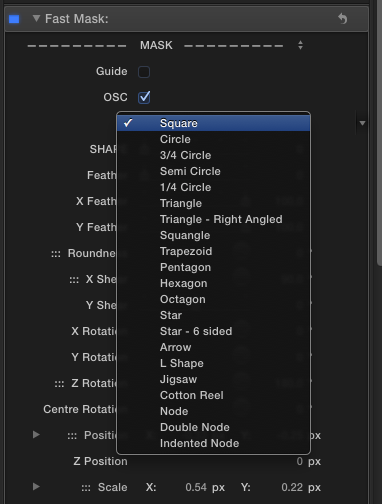 One thing that I particularly like about Fast Mask is this little on-screen widget that is there to control things like scale, shear, rotation and roundness for a mask. While you can do all of that in the FCPX effect control sliders it’s a lot more fun to do it in the little widget.

Strangely enough these on-screen controls *don’t* seem to show up in the video scopes so maybe it is possible to have effect controls in FCPX that isn’t part of the video signal. Who knows.

Fast Mask if $49 and while it isn’t anywhere as full and feature rich as Core Melt’s SliceX for FCPX it isn’t as expensive either. As I said in my SliceX review, SliceX is the masking tool for FCPX that you want if you can have only one but Fast Mask is a cheap alternative that can be quite usable.