The Magic Bullet Suite 11 is highlighted by a new version of Magic Bullet Looks as well as a short film to showoff some of the stuff that Red Giant products can do .

Here’s the bullet point list for the new Looks:

It’s cool to see some other Magic Bullet tools put right into the Looks interface as that means more work can be done right in Looks. But the biggest feature by far is external monitor previews for Looks.

Setup is simple as you choose you external video device via the preferences: 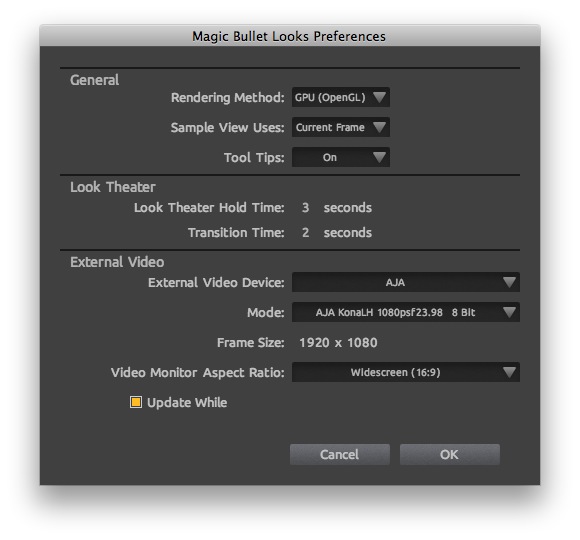 Then just hit command + E to preview on the external monitor. As needed a feature as that is I can’t make it work on my current install. When working in Final Cut Pro FCP has control of the AJA Kona card and Looks can’t seem to grab control of the card from FCP. Red Giant support is investigating.

The other new tool is Magic Bullet Cosmo. Here’s the Cosmo bullets which is available seperate from the suite for $99:

This will be a nice little tool to use under the harsh realities of HD. It reminds me of Digital Anarchy’s Beauty Box so it’ll be fun to see how they compare.

The suite is compatible with many different hosts (though not yet FCPX and not Avid Media Composer [grrrr]) so check individual products for compatibility. 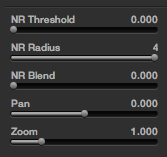 Noise Reduction is now available under the Primary grading tab

One of the big NAB 2011 updates is now shipping with Resolve 8. There’s tons of new features in 8 and it’s a free upgrade for existing owners.

I think my favorite feature is the new addition to the curves grading too: Hue vs. Hue, Hue vs. Sat, Hue vs. Lum and Lum vs. Sat. I haven’t been much of a curves user but I find this vs. concept very simple to understand for an amateur color grading person like myself. They are quite powerful and very fast.

If you want to give Resolve a try (and you may now that Apple Color is apparently dead) the watch for the July release of DaVinci Resolve Lite. That’s a free version of Resolve limited to “SD and HD resolutions, two color correction nodes, a single processing GPU and a single RED rocket card.” That’s pretty crazy to think about a free, feature-limited version of Resolve.