To avoid having to buy two HDV decks, many people desperately seek a universal model

Up until now, post-production facilities that accept HDV footage have confronted a major dilemma: If they bought a JVC BR-HD50 deck (US$3,399 list), the only HD recordings they could play were HDV 720p from JVC (none of the HDV 1080i tapes from Canon or Sony). On the other hand, if they bought one of the professional Sony HDV decks (currently between US$2,480 and US$8,290 list), they could play any HDV 1080i tape, but as soon as they tried to play an HDV 720p tape, the IEEE-1394’s video output would mysteriously go blank. Out of desperation, some facilities went to the extreme of buying two HDV decks: one JVC and one Sony. In other cases, people bought a Sony HDV deck only, and then settled for an analog capture from HDV 720p recordings, with its noticeable D>A>D conversion as shown in this breathtaking video (courtesy of Convergent Design and JVC Italy), and in some cases (as with the HVR-M15 and HVR-M15A when playing HDV 720p tapes), a forced, undesired cross-conversion from 720p to 1080i. This is a nightmare for a purist! But hold on…

Enter the HDMI solutions from AJA, Blackmagic, and Convergent Design (see my prior article Why capture HDV via HDMI?), and many of the problems disappear! Although Sony has unfortunately censured the IEEE-1394 output when playing back 720p tapes on all of its HDV decks so far, fortunately Sony has not done the same with the HDMI output of the original HVR-M25, the new and improved HVR-M25A (US$4,300 list), or with their consumer and some professional HDV camcorders with HDMI output. So (when combined with the HDMI solutions from AJA, Blackmagic or Convergent Design), the HVR-M25 and HVR-M25A have established themselves as an almost universal DV/DVCAM/HDV playback deck with digital output. Fortunately, all of the new HVR-M25A decks worldwide can play DV/DVCAM NTSC & PAL, Canon HDV 1080/24f*/24p*/25f/25p/30f/30p/50i/60i, Sony HDV 1080/24f*/24p*/25f/25p/30p/50i/60i, as well as JVC’s HDV 720/30p via its HDMI output. [The original HVR-M25 and the new HVR-M25A cannot play HDV 720p tapes recorded at 24p, 25p, 50p, or 60p (see the next page about the HVR-M35)… and look for special 24f/p comments on page 2 this article.] Even some consumer HDV cameras with HDMI output (like the Sony HDR-C3 and HDR-HC5) can playback many of the mentioned formats. For that reason, the HDR-HC3 and HDR-HC5 have become a “poor-man’s” HDV via HDMI feeder deck, although certainly they won’t be nearly as universal, responsive, flexible, or reliable as the HVR-M25A or HVR-M35.

*Regarding ingest of HDV 24f/p and HDV 25f/p
In my recent article When 25p beats 24p, I explained all of the multiple reasons why you are almost always better off shooting in 25p instead of 23.976p (“24p”) if you are looking for a low framerate and are going to take advantage of editing on a low framerate timeline. The 25p advantage is even greater when we consider the benefits of HDMI capture. However, if you read the introduction of that same article (or Adam Wilt’s subsequent article The 24 fps Prayer, which covers other 24p woes), you may consider shooting in a medium or high framerate anyway. That being said, following are the specific answers for each type of HDV.

How to ingest JVC HDV 720p, in all 5 progressive speeds?
The first JVC HDV camcorders had a single sensor and shot at a single framerate of 29.97p (“30p”), and that’s the only framerate playable for HDV 720p recordings on all of Sony’s HDV decks with HDMI (not via IEEE-1394). 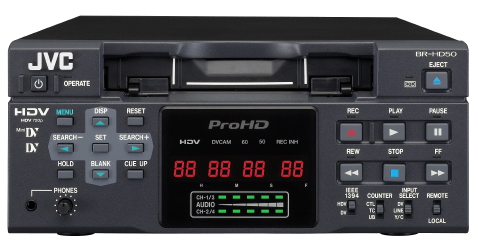 How to ingest Sony HDV 24f/p and 25f/p
Sony’s legacy “24f” and 25f modes are a leftover from the Z1 (where they were not commonly used anyway) and are no longer used with the newer Sony cameras. The “24p” of the HVR-V1 60Hz versions and the “24p” of the HDR-FX1000 60Hz units have all of the same weaknesses and workarounds explained earlier. Although the new Sony professional HDV camcorders (HVR-S270, HVR-Z5, and HVR-Z7) offer native progressive modes which theoretically facilitate post-production on a 23.976p timeline after shooting “24p”, this only works with the IEEE-1394 output of the camera or HVR-M25A, which unfortunately negates all of the HDMI capture benefits explained at the beginning of the Why capture HDV via HDMI? article. For that reason, you are still better off shooting in 25p with any of the Sony professional progressive HDV cameras if your intention is low framerate, together with the the associated benefits of HDMI capture and a low framerate timeline. Fortunately, any Sony HDV 25p recording will play perfectly with any Sony HDV professional HDV deck which has HDMI output (or HD-SDI output).