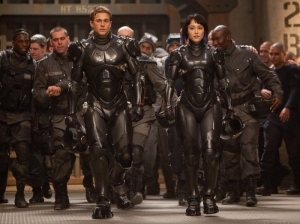 It’s over twenty years since professor Marsha Kinder coined the term ”transmedia” and over seven years since professor Henry Jenkins published the seminal work ”Convergence Culture”. Transmedia as such is, as many have pointed out over the years, not anything particularly new, despite the aura of buzzwordyness the term has acheived.

Still, it’s apparently a difficult thing to get right. And not getting it simply quite right, but really-really-on-the-spot-just-a-little-bit-to-the-left-aaah-that’s-it!-right, the kind of right you need as a content producer today, to cut through the clutter in a meaningful way that resonates with an audience.

The other day ”Pacific Rim” opened to a disappointing less-than-40-million opening weekend take. They, as Jeff Gomez pointed out to Business Insider, did not get it right. Releasing a graphic novel and launching a web site to tell some of the back story is all well and good, but the project could have given scope to so much more in storytelling terms – potential that now remains largely unfulfilled.

The question then is, how to approach whatever project you’re working on? There’s the fundamental question of making sure you build your project or franchise carefully from the ground up, with all the things that are due to contribute being included from the very beginning, thus making it possible for them to influence each other in the best possible way from the start. There’s the need to get hold of and apply whatever competence you do not possess on your own, making sure that whatever you decide to include in your project has the best possible backing through the development and production process. There’s also the question of knowing your project well enough to not include anything superfluous that will detract from the full experience you want to offer.

One key ingredient in the mix is the audience, and the changing relationship between author on the one hand and an increasingly active consumer on the other. In a sense, we are coming back to the days of interactive theatre, when the audience of the middle ages were an integral part of any theatre play. With the rise of the Author as the key creator and narrator, the audience’s engagement in the story became less and less desired. Now though, we are coming back to creating for interaction and co-creation; only this time, on a possible global level, with all the challenges that entails.

Taking all of this into consideration, here are four initial points to consider when evaluating your project for transmedia potential:

There’s no contest here, at least not for me. Story is everything when it comes to transmedia. Is it a compelling and immersive story that has the weight and the bones to stretch to different platforms? Does it have a story world already in place, or is it easily conceivable how such a world could be designed and developed? Are the protagonists and antagonists (and side characters) suitable for a deeper mythology? Is it possible to sense the existence of a narrative superstructure somewhere along the road? If a project’s Story supports transmedia, you’re halfway there. If it doesn’t, don’t bother.

I’ve heard several people arguing that in today’s world, context beats content hands down. While I don’t agree, I can see that they have a point – context matters. When assessing an IP for transmedia potential, very much so; if transmedia extension does not make sense in the context of your IP, there’s absolutely no need to go there. ”Not making sense” can mean that you realize the ROI on developing a full on transmedia experience would not justify the expense. Or it can mean that you come to the conclusion that your property is better exploited by extending the narrative on the original platform, without going into apps, online ARGs, graphic novels or whatever. Don’t get swept away by the hype, basically.

It’s quite simple really; even if you’d be hard pressed to find members of the potential audience harassing you for not implementing a transmedia strategy for your IP, the fact is that they – especially if they belong to a younger demographic – already ARE transmedia, multiplatform, 2nd screen and all that. To NOT create and extend with that fact in mind is simply not realizing the full potential of ones IP. Even the older demographics are increasingly up for some multiplatform niceness.

Seldom do we get the luxury of having a budget split into fair parts for the different parts of the transmedia narrative. Mostly it’s about cannibalizing other parts of the project, or finding ingenious ways of funding online and mobile and live events. But transmedia can potentially work the other way around as well. Say that you have no way of getting sponsors to fit into your television series. A spin-off  or parallel narrative on YouTube, however, might be the perfect fit for a sponsor to enter. One good thing about having to be very creative with financing when producing transmedia, is that it has a spill-over effect on the original IP as well.  We just have to go find money in strange places!

Would any of this have helped the producers of Pacific Rim? Perhaps, perhaps not. But most importantly – the more projects we can point to as examples of how or how not to do, the more likely we are to see less transmedia misses such as Pacific Rim in the future. If this post can be of any kind of help for anyone in this search for the Holy Transmedia Grail, I’m happy.

Simon Staffans is a writer, producer and brand strategist at MediaCity Finland and an avid blogger on all things media – cross-, trans- or anything in between. Follow him on Twitter here.