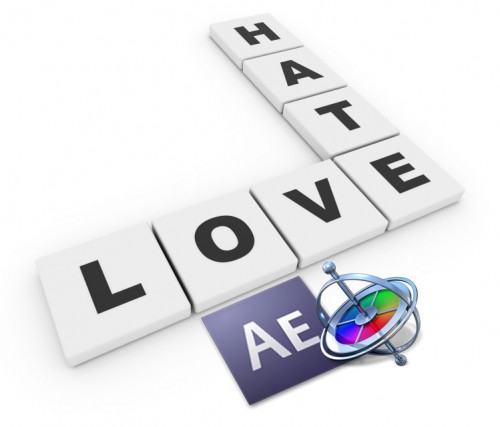 I teach Motion to a lot of After Effects users. Sometimes they end up in my class because they want to be there; other times their organization has sent them and they arrive kicking and screaming, ready for a fight. Either way, after clearing away a lot of misconceptions and getting them to actually use Motion for 3 days, I find almost every After Effects user comes away with a new respect for – and frustration with – this wonderful yet sometimes annoying application.

So, based on all the feedback I’ve received from After Effects users who have used Motion over the years – with my own opinions liberally thrown in – here are my Top Ten lists for what After Effects Users love and hate about Motion.

The ease with which you can drop a Motion project directly into Final Cut Pro or DVD Studio Pro, and the simplicity of the “roundtripping” process for sending clips from Final Cut Pro directly to Motion and back again, really make Motion shine. For a quick title sequence, lower third super, or DVD Motion menu, all without rendering out intermediate movies and all which can be re-edited quickly via the “Open in Editor” command, the workflow can’t be beat. If Final Cut Pro is your NLE of choice, Motion becomes a no-brainer for quick titling and effects work.

The fact that you can import layered Photoshop documents into Motion and retain not only the individual layers but also all the blend modes applied to those layers makes for a great workflow option – and if layers are saved as Smart Objects, even layer styles will pass through to Motion.

The ability to access Motion’s entire template library directly inside Final Cut Studio, and to quickly replace video and text elements without altering the motion graphics design, always impresses AE users – especially those working in a group production environment. What they like the most is the ability to radically modify the existing templates or to create your own from scratch. The Final Cut Pro editors can then use those templates without knowing a thing about Motion.

The literally thousands content elements that come bundled with Motion let you very quickly complete out a composition with backgrounds and animated elements, or even build an entire project from scratch. And just like the templates, you can modify these elements to make them completely unique to your project.

Motion’s unique architecture, which allows you to play back projects while you are adjusting parameters, is addictive – and lends itself to a very interactive design process. While you can quickly lose full realtime performance (depending on your hardware and complexity of your project), it’s still the only desktop product out there that leverages the graphics card to provide this kind of design experience.

Motion’s particle engine is sophisticated and easy to use. And the large number of preset emitters let you quickly add smoke, fog, sparkles, and other animated effects to a scene and tweak them. Many AE users use Motion simply to create particle effects, which they then export and comp into their After Effects project.

Every time I introduce an AE user to parameter behaviors for the first time, I see an “aha” moment. Much like expressions in After Effects, these effects let you animate just about any parameter of any object or effect with the click of the mouse – much like the Wiggler in AE, but without the need to write any code.

This is another feature that always has a great “wow” factor. Grab the Paint Stroke tool, select one of the Light presets, and scribble in the Canvas: instant animated light strokes. The ability to “paint” with your own movies and image sequences opens up extraordinary design possibilities, going beyond the large number of presets already included.

One of my favorite elements in Motion, replicators let you create sophisticated patterns for backgrounds, animated elements, or mattes in minutes.

The text engine in Motion is very similar in scope and power to AE, but many folks find it much faster and easier to use, particularly when creating letter-by-letter animation.

The camera behaviors in Motion make it almost shockingly easy to create smooth, accurate camera moves which sweep around sets of objects or fly to precisely to other points in 3D space.

Of course, not everything is wine and roses. Here are the top 10 things that After Effects users hate about Motion:

One of the most off-putting things to an AE user is Motion’s UI – mostly because it’s so different from AE, and nothing is where they expect it to be. In particular, hardcore AE users will doggedly try to work exclusively in the Timeline in Motion – which invariably frustrates the heck out of them. And why can’t you use JKL to navigate or Shift-Z to fit the Timeline to window, like Final Cut?

2) One Comp Shall Rule Them All.

An After Effect’s user’s work is built around creating multiple compositions within a project. In Motion, the project file IS the comp – you can pre-compose by putting layers into groups and groups into other groups, but you can’t create separate comps in one Motion project. Rather, you create separate Motion projects. It’s a functional workflow – but it’s not fast or intuitive for an AE user.

At first, After Effects users are relieved to discover that Motion does, in fact, have keyframing functionality – complete with many of the same keyboard shortcuts as either AE or Final Cut Pro – but they quickly get frustrated when trying to do simple things like changing keyframe interpolation and getting unpredictable results.

None of these AE elements has an exact counterpart in Motion. While behaviors work much like expressions do, you can’t write your own. And there is no way to link a parameter of one layer to a different parameter of another – for example, you can’t make the scale of one layer drive the rotation of another layer – a simple task in After Effects. Grouping provides a sort of parenting function, but the basic fact is that these powerful tools in After Effects really don’t have any equivalent in Motion.

Here’s where Motion’s realtime design comes back to bite you: as soon as you build a moderately complex project, the whole system bogs down. Anything near realtime goes out the window (even with a powerful graphics card, assiduous soloing of layers and creating short play ranges) and you end up beachballing and waiting for screen updates. Argh!

Motion’s FxPlug architecture, while is allows for its dynamic realtime compositing, precludes the use of most of the huge universe of third-party After Effects plugins. And while the number of third-party FxPlug products is growing quickly, it can’t yet touch what’s available for AE.

Want to import a Motion project into After Effects? It used to work, but not as of AE CS3 and Motion 3 – and I doubt it will work with CS4, although I have yet to test it. You can rename your Motion project .motn extension to .mov as a workaround, but Motion and AE just really don’t play well together.

AE users quickly get excited when first working with Motion’s intuitive 3D implementation – until they discover that lights don’t cast shadows. And that the camera has infinite focus, so they can’t blur the foreground or background. While neither of these features is needed in every project and there are workarounds, they are glaring omissions compared to what an AE user is used to.

Motion 3 in particular has been plagued with installation issues resulting in quirky or unstable performance. While a reinstall usually fixes these issues, it shouldn’t be so difficult to get Motion to run correctly. And even when it seems to be installed correctly, it’s not all that unusual for Motion to lose part of the interface or to crash. Trashing preferences can fix some of these issue, but AE users who are used to a rock-solid application find Motion’s twitchiness annoying, to say the least.

Overall, Motion holds out great promise as a complement to an After Effects user’s motion graphics or visual effects workflow – and as a great standalone application in its own right. But the program can just be so frustrating when trying to do something beyond creating a quick background or particle effect – it seems to throw up roadblocks as soon as you try to do something more complex.

Mark Spencer is a bay area-based freelance producer, editor, teacher and writer. He can be reached at markspencer -at- mac.com