…and I feel fine. (The iPhone 3G S and the next video revolution.) 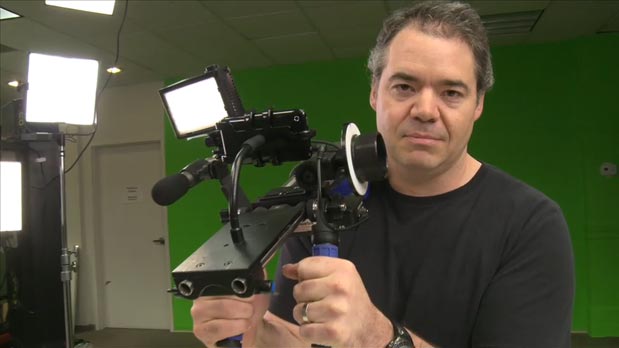 I posted a fun little video about creating a shoulder mount rig for the iPhone 3G S on Friday. You can see it here.

While done in a tongue and cheek way, the most important thing for Pros watching the video is actually the first minute. I was dead serious there. The new iPhone is a game changer… make no mistake about it.

The iPhone Video camera is clunky and not particularly high quality. There are many small video cameras and even other phones (think Nokia) with superior quality. But what it lacks in quality, it makes up for in ubiquity and ease of use. Having this phone is far easier than carrying a camera around. And being able to seamlessly upload videos to YouTube will take event coverage, from news to weddings, into an entirely new realm.

What many thought would be the tyranny of an all knowing shark, Big Brother, has been replaced with the piranha attack of Little Brother (or more accurately, Little Brothers, Sisters, and their cousins). Soon, you will not be able to buy a phone without a video camera… and because of iPhone’s ease of use, uploading will become second nature for many.

News will feel this first. In fact, they are already grappling with the impact. With correspondents in Tehran relegated to cell phones, reporters are only a step ahead of the hordes of cell phone users on the streets – who can speak Farsi and actually know what’s going on, in realtime, without a translator. There will be calls for “Journalistic Integrity” but what does that mean when the you have an outsider attempting to make sense of an internal conflict? Maybe we’re better off seeing two (or many) different skewed views than one “correct view”. After all, in the US, we have MSNBC vs. Fox News… who are arguably skewed equally to the Left and Right.

In any case, the immediacy of a thousand video capable phones at every news event… even when that news event is a sudden water landing in New York or violent crackdown in Iran… has captured the attention of CNN and others. Within months, I fully expect to see a CNN “iReport” iPhone app that will upload directly to CNN’s servers complete with GPS location, Time Stamp, and shooter release included.

I’m sure many videographers stand aghast. “How can the unwashed masses replace our years of experience and training?” The answer is, of course: By being there and being willing to share their videos with the world for a mere mention and maybe a T-shirt. As news organizations are continually pressed to make cuts and, at the same time, the demand for real-time news increases – this opportunity will be impossible to ignore.

The hard reality is that this has been coming for a long time. We saw this in print nearly 20 years ago. Highly trained pre-press artisans were replaced by whippersnappers with Photoshop (I was one of these interns). We saw this 10 years ago with the Web – where the lack of HTML coders accelerated the collapse of the “Dot Com” Bubble but soon they were $15/hour for basic work and often replaced overseas. Video is just the next step in this process. Never has the ability to shoot video, and broadcast quality video, been in the hands so many.

Before we all start looking for the door and lament the end of “our time” and video professionals… be of good cheer. While many video offerings will become difficult to create a business around, the demand for professional video is spiking. 10 years ago, you were “behind the times” if you didn’t have a website – today, you are behind if you don’t have videos on that website. Fortune 500 companies are scarfing up more video than the Cookie Monster at a Mrs. Fields outlet store. In hard times, video reduces the pressure on sales and support staff. When the economy expands, raw competition will take over. The revolution for video is not nearing the end but just at the beginning. Independent producers with a solid digital production background are in the pole position if they are willing to zig and zag with the chaotic expansion of this new market.

More importantly for this iPhone revolution, however, is the human impact. Where the pen is mightier than the sword, and a picture is worth a thousand words… a video camera is a WMD – Weapon of Mass Distribution. There is nothing more powerful…but like really… nothing. Gandhi didn’t take on the British Empire by himself, he did it with the press… as did Martin Luther King Jr.. Conversely, Vietnam was largely lost on the TV, not the battlefield. And losing one pilot in Somalia didn’t stop the US in its tracks, video of that pilot being callously dragged through the streets did. The bright light that video sheds on the world makes many of our darkest nightmares intolerable to ignore with a scone and latte. The ubiquity of these new tools and the distribution of their content will make it nearly impossible to hide… no matter how powerful the individual or country. This won’t always be “for the best” but in the end, it is most powerful defense against totalitarianism and violence.

This revolution is just beginning and on the other side lies not just freer self-expression, but a freer and more connected existence. It’s the end of the world as we know it… and I feel fine.