A bunch of BOSCPUG folks get together to make a short

Hustle from Daniel B©rub© on Vimeo.

A number of filmmakers involved in the Boston Creative Pro User Group got together in January to give the new Canon C300 a test. Their result is this short piece called Hustle. New camera tests on Vimeo are a dime a dozen these days but after speaking with the BOSCPUG folks involved in post I got a few before and after color grading stills. As an amateur colorist myself, I always enjoy seeing these types of before and after images. Not so much to analyze the technical quality of the image and a camera’s latitude but more to look at the creative decision in the grade. I hope you enjoy seeing them too.

There’s a list of a lot of the technical details and special thanks to the cast and crew on the Hustle Vimeo page. The colorist was Rob Bessette of Finish Post.

Here’s some notes from Rob on grading and working with the C300:

The C300 worked like any other standard camera into Resolve. Hooked up the hard drive to the Mac system, imported XML, and all fell into place nicely. Checked against the reference cut and everything was lined up.

Exported DPX sequence with handles while retaining source code/naming for Linux system. Lined right back up, no problem. No hiccups, no speed bumps. Very smooth.

Went ahead and graded away. A couple of overexposed shots had to be brought back down to earth (I’ll get you stills) and they behaved very nicely. Nothing blown out, but still, very good latitude. I did a lot of HSL keying and it pulled through well. Not a lot of artifacts or noise from the keys, which is always nice. I had one ridiculously hard shot with an improperly white balanced background that I had to key, track, mask, and window that did better than I thought it would.

Overall I really liked the camera. In my opinion, it’s way better than the 5D or 7D. Way less video like. Still has a little more crispness than I’d like, but that’s just me. Doesn’t quite reach the Alexa as far as latitude is concerned, but does pretty damn well. Latitude was impressive and seemed like a real nice color range.

Below are some before and after images from the film. 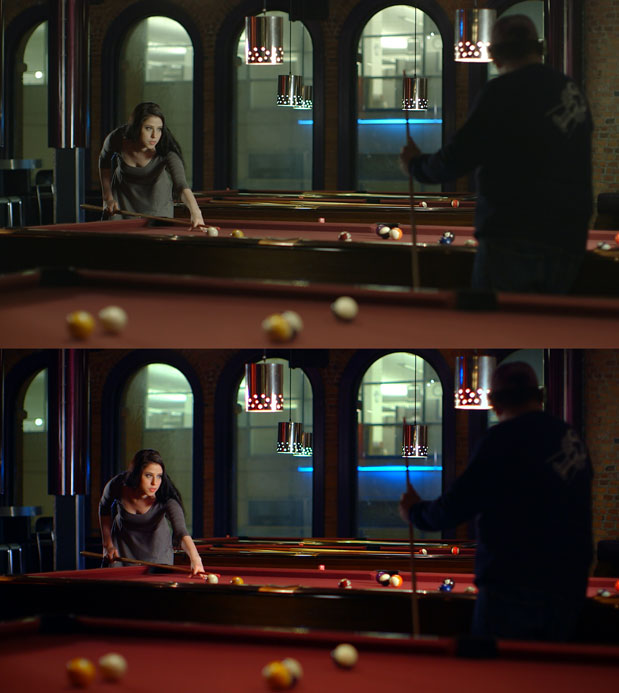 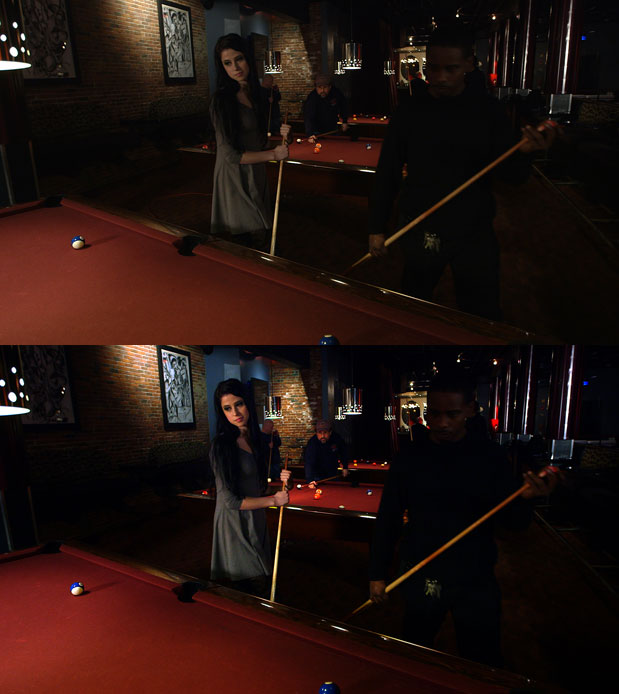 If you look close between the pool tables you might see the orange AC cable on the floor in the wide shot. The paint and beauty work such as the removal of the orange AC cable was handled by Tim Montgomery on Autodesk Smoke. Tim says of working with footage from the Canon C300: “there was plenty of latitude and information in the exposure to get a good track if I had really wanted to. Overall, the footage would work just as well as any other digital format and I would fully recommend shooting it.”

The captions on the images below were from Rob: 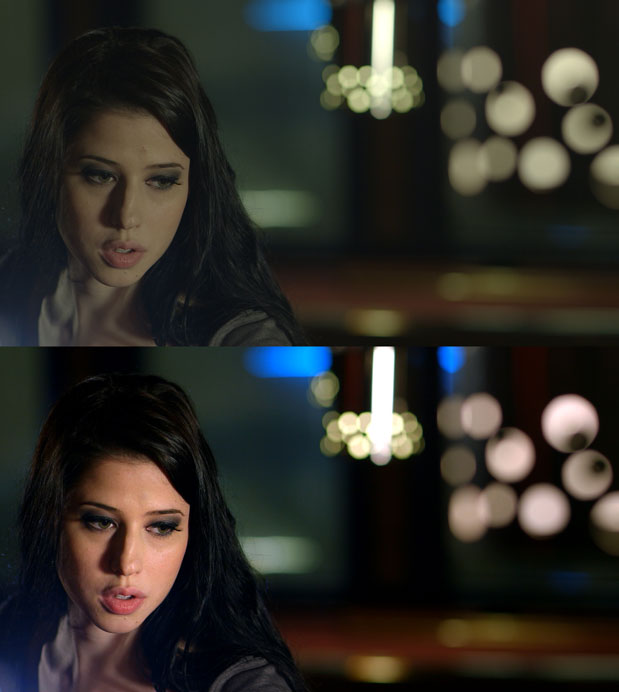 Also, on the close up we did a blemish removal on the actress’ forehead by tracking on a power window with a slight gamma bump and defocus. 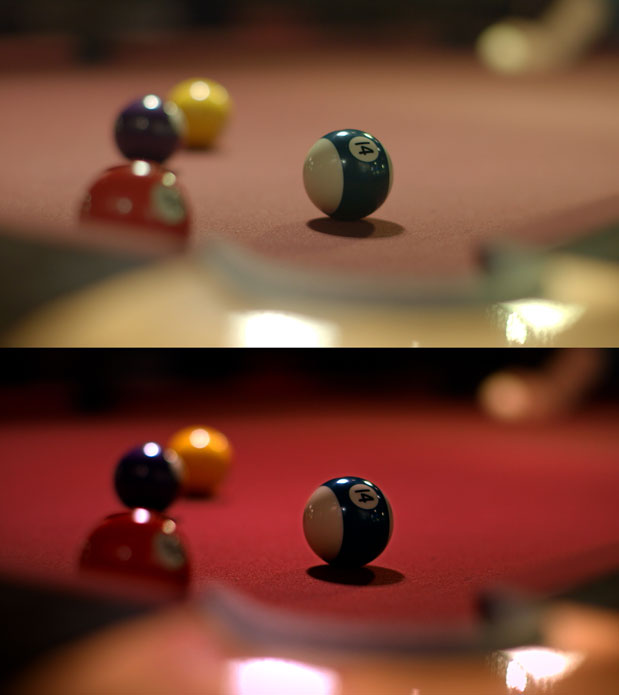 The corner shots were the shots that were the most out of character. So I had to key the red, balance the shot, and bring it back into the rest of the story. 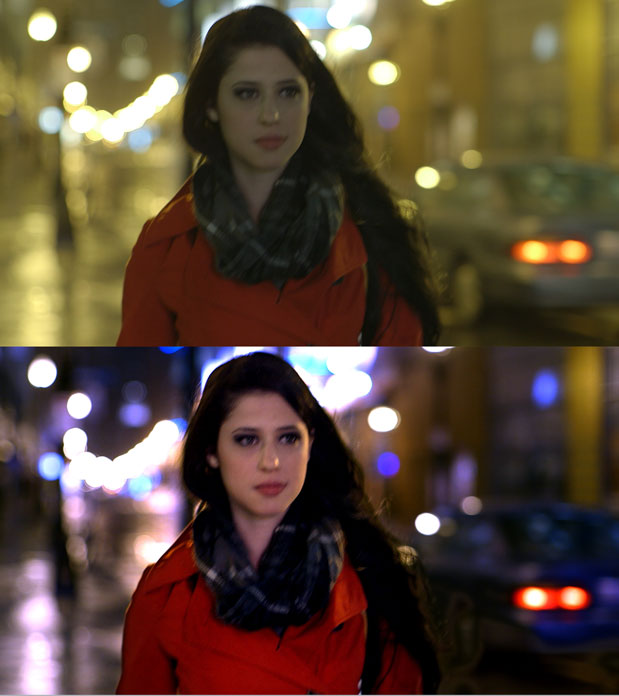 The most challenging shot was once she moves outside. We had to turn the background blueish while maintaining her face.

The exterior image above was a bit soft and somewhat noisier than the other images. It’s a bit tough to see with small web images so below is an actual pixel sized detail of the talent’s face where you can see the softness of the image as well as the noise. “This shot was a tough one for us as it was a cold January night, it was now raining and Felt Boston had to close up, so we were at the mercy of the venue and weather and unable to pull off another shot of her out the door,” BOSCPUG’s Daniel B©rub© notes. Rob comments again in the caption below the image. 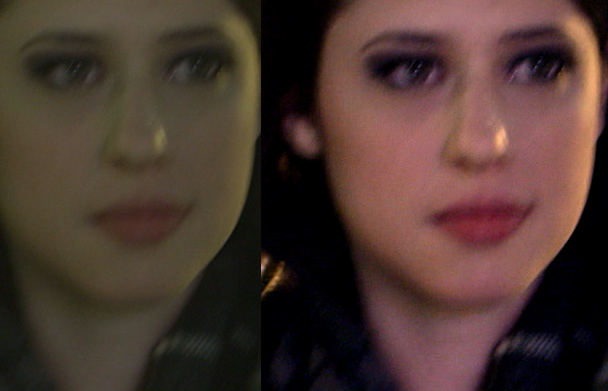 It was definitely soft and there was some noise. Not sure if the exposure/environment/operator was the main cause, but, like you said, it claims no noise. I think this was a good extreme example. It shows the latitude of the color, but also shows the limitations with the noise. From the rest of the footage That I saw, there wasn’t really any noise. Pretty happy overall.

It’s always fun to see post-production people at work since we’re usually way, way, way behind the scenes. Below are two images of Rob grading at his DaVinci Resolve. He’s working on a matte around the actress. 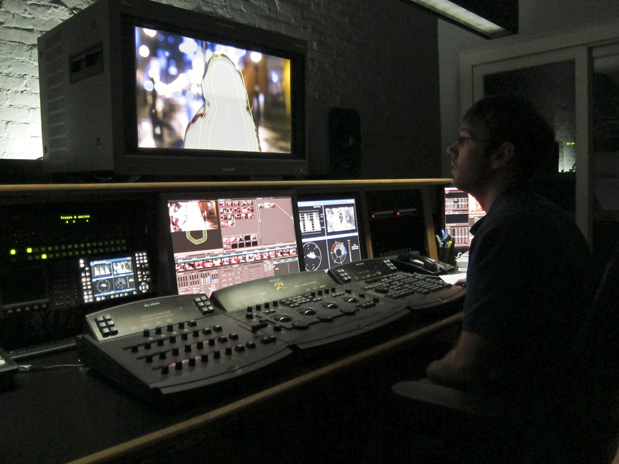 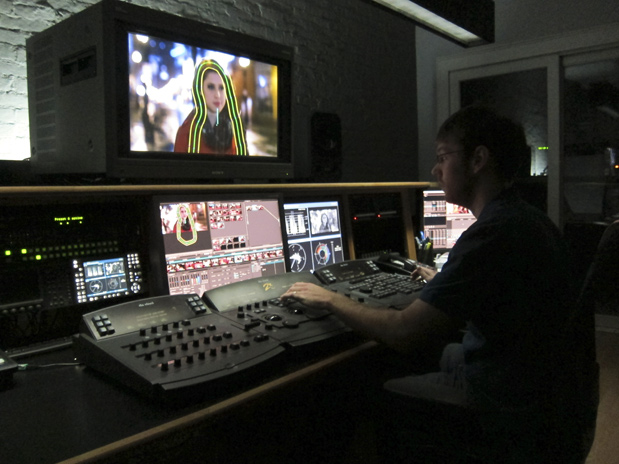 If you look closely at the images above of Rob working you’ll see he is using older DaVinci 2K control panels. The DaVinci 2K systems were hardware color grading systems that were used for years and are still in use at some facilities today. They were the standard for color correction long before DaVinci came along with the Resolve and even longer before Blackmagic Design bought DaVinci Systems and gave us the Resolve we know today. I asked Rob about that 2K panel since Blackmagic Design offer an updated Resolve panelthat runs around $30,000. He said this about the 2K panel and his Resolve system in general:

I am using the 2k panel on a Linux resolve. It’s not compatible with the Mac. We have both Mac and Linux licenses and mainly use the Mac as an assistant/render station. It plays much nicer with quicktime codecs. We opted to keep the 2k panel so we could switch back to the 2k via KVM switch. All it takes is a panel reboot and we are good to go. Also we have a Cintel Ursa Diamond for archival SD transfers that the new panel couldn’t do either. I had no problem adjusting to the new controls, though. All we had to do was pop off the old keys and put new ones on. Things that didn’t exist before (nodes, 3d, etc) were just a matter of switching key caps. So I don’t have much of a comparison to offer. I was told the only difference was that some keys required some sub menus rather than one key stroke.

And here’s a few words from BOSCPUG’s Daniel B©rub© about the production of Hustle as well:

I’m just trying to get the word out about the good people involved in making this little short, if anything it is more about the crew getting together to make this than the camera itself. It shows how ideas can spur actions amongst likeminded creatives and if anything Hustle acts as a flag planted in the ground in Boston for more decisive collaboration and examples of the great talent that exists in Beantown!

We all met at Felt Boston with the C300 with only three hours to be there and an empty pool hall. During the course of letting each filmmaker there have a test try behind the C300 we realized what we were shooting could be turned into a basic story. It’s funny because at that point my friend Rick Macomber of Macomber Productions came up to me after shooting with it for an hour and told me he had an “Epissany” while taking a rest break about an idea we could run with and we all pulled together to shoot the rest of what you see in Hustle.

Thanks to those involved in Hustle as it was fun to see some of the behind the scenes images and information that went on in the post-production.