Flowing ribbons in 3D space tie together this sports ID.

For our next project spotlight, we’re going to look at a Fox Sports HD promo animated by Joost Korngold of Renascent. This spot fuses organic movement with the high-impact 3D Fox Sports is known for. Joost, as well as Fox Sports Creative Directors Josh Nichols and Mark Denyer-Simmons plus Senior Vice President and Creative Director Robert Gottlieb, were kind enough to spend some time answering questions and revealing how this spot unfolded.

As the Fox Sports web site alludes, this job was originally slated to be an NFL promo. Mark had seen and liked Joost’s work, and asked him to pitch on the job. There was initially talk of it being a full graphics toolkit that Joost “and his team” could produce, but the problem is, Renascent is just Joost – no team. As a result, Fox decided to give Joost a 30-second NFL Returns spot to do instead. Joost quickly turned around some storyboards that Fox loved. The plan evolved further: The NFL Returns spot was no longer needed, but they liked Joost’s treatment as an idea for either a college football spot or an high-definition ID. Robert explains “we decided that it was more appropriate as an HD spot because of the color, clarity, and beauty of the images thematically made more sense with HD.” It shows what happens when everyone stays flexible and lets good creative find its place.

Interestingly, the inspiration for the high-testosterone result came from the natural movement of elements such as fire, water, and wind. After forming a mental image, Joost “initially started playing with a set of ribbons, with footage mapped onto them, simulating them as though wind catches it to break up the footage. It was set up in such a way that the ribbons all connected for the footage to fit on it perfectly when not in motion (basically a flat plane in 3d space). I liked the tests and the flexibility it give me traveling to different sets of ribbons. Finally when asked to create the HD ID, I wanted to give more meaning to the ribbon movement and worked on ways for the ribbons to interact with the live footage, so it becomes more than just eye candy.” You can see below how the 3D environments Joost set up in Autodesk 3ds max relate to frames of the final video: 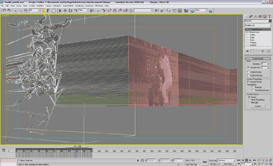 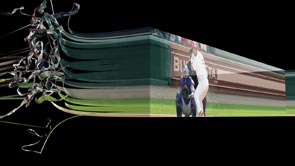 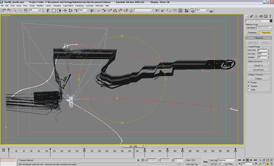 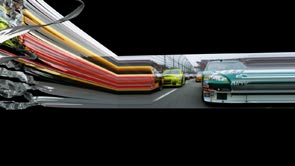 As many motion graphics designers know, one the hardest parts is figuring out how to transition between frames in a storyboard to create a fluid progression. This is even more of an issue when building a 3D environment that you’re flying around. Sometimes, it requires careful planning; other times, as Joost notes, serendipity intervenes: “I literally just stretched the outer sides of the ribbons as a test to connect the sets together and noticed how it also stretched the outer pixels of the footage. It’s a type of trick called ‘pixel stretching’ that’s been used in the past in Photoshop and had been done to death, but I enjoyed how this looked in a 3D treatment with the stretched pixels on these 3D ribbons creating beautiful sets of colors. Let’s just call it a ‘happy accident’.”

(Those for looking for a similar result in After Effects might want to check out the CC Scale Wipe and CC Radial Wipe effects.)

One potential complication was that Fox is based in the US, while Joost is based in the Netherlands. Fortunately, Joost has worked remotely for US companies for over seven years now, and Fox is used to working with companies around the world. In the end, they made the time difference work to their advantage. Mark explains: “Joost would post his work on his FTP site at the end of the day in the Netherlands, which we would review first thing in the morning US time. He would then receive our notes 9 hours later, before the beginning of his working day. It really is a great way to work as the time cushion allows us to digest the previous day’s elements.” Regular conference calls also helped facilitate communication to make sure everyone was on the same page. (Mark also notes that “Joost is a vampire, so he never sleeps at night; invariably we would catch him into the wee hours of the morning in Amsterdam.”)

In addition to the video footage, Fox also supplied an EPS file of the Fox HD logo to Joost. In an example of how good designers go above and beyond what it seems that the client may require, rather than simply extrude the logo, Joost modeled with interesting bevels and geometry “to give more form and richness.”

As sound is personally important to me (we prefer to animate to the soundtrack if at all possible), I asked how the music and sound design evolved in relation to the graphics. Josh explained that “The sound and picture evolved together as the project progressed. Mic Brooling first composed original music and created the sound design specifically for the ID that was based on exact timings that we wanted to hit. After the initial audio pass was created, Joost synced his animation to the audio track. When Fox received the final rendered ID, Mic then created additional sound design effects that played off of the fluid movement of the animation.”

For the final delivery, Joost provided an image sequence of the ID, as well as 3ds max files for the spot and additional elements with instructions so that Fox could swap out footage as needed.

It is worth noting that spot was delivered at 1280×720, with a frame rate of 59.94 fps. Whereas many creating HD are used to the idea of working at the filmic rate of 24 (or 23.976) fps, sports benefits of the added realism of running faster than the magic threshold of roughly 48 fps where our brains detect something as being “real” versus “dreamlike” – so the higher frame rate was very appropriate for the subject matter.

I’m always on the lookout for other interesting projects to share with PVC readers. If you’ve worked on something fun lately, please get in touch – you can email me at cmeyer at this domain (provideocoalition.com). Also check out the previous Spotlights on Fringe and Nordisk.