Test results with images, to compare and contrast. 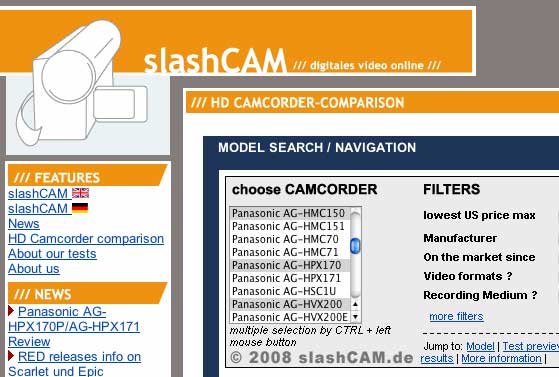 Our minders here at PVC have been gently encouraging us to write up “holiday lists”. They say, “people love lists—so publish a list already, or we’ll send the holiday ravens ’round to peck out your eyeballs!” Well, I ain’t got no list (yet), but the folks at slashCAM have posted a database of over 80 camcorders, so you can compare and contrast ’em based on your own particular criteria, and make your own danged list.

slashCAM, a “German based magazine for independent filmmaking” (with an English version, too) has been reporting on camcorders and video-related items for years, and they’re proud to announce their camcorder database. It’s notable for having full-res frame grabs and performance plots for the cameras they’ve tested.

They offer plots of contrast vs. image frequency, with the full scale being 2048 lines (thus these are measured film-style: samples per picture width, as opposed to TV-style lines per picture height), based on recording at the highest quality the camera is capable of, for both luma and chroma; lens distortion at full wide angle; a 1:1 chunk of an ISO 12233 test chart (where the numbers are lines per picture height); plots of internal microphone noise level; and full-frame test images at both 12 and 1200 Lux (1.11 and 111 footcandles).

Note 1. As most of our [luma and chroma contrast vs. frequency] measurements were taken with the camera in Auto Mode, not all measurements have the same luma-level. So the percent values are only comparable when you take this into account when interpreting the waveform. We are working on this.

Note 2. The red line in the diagram is also for a future feature and does not reflect a certain value. For the interested: it’s a beta-algorithm to measure RAW sharpness corrected for contour. We will expand more on this feature in the future.

Bear in mind that any such compendium of raw data is subject to the luck of the draw on the part of the testers (for example, did they get a good sample of one camera, and a poor sample of another?), and to over-analysis on the part of the readers, but these are unavoidable dangers—it’s still a valuable starting point for looking at what’s on the market in the way of consumer, prosumer, and affordable pro camcorders. Enjoy!