A case where the whole is indeed greater than the sum of its parts.

When you look at Adobe CS Production Premium’s video production tools – Premiere Pro, After Effects, Encore, Audition, and Photoshop – many if not all could be considered industry leaders in their own right. But it’s how they share assets that makes the suite such a powerful performer.

Applications in Adobe CS Production Premium share assets in several ways. The goal? To save you time, reduce your work load, and ensure your assets retain their original quality throughout the video production process.

Adobe Dynamic Link is a feature of Adobe Production Premium and Master Collection (it is not available in applications purchased separately). You use it to create links between projects, sequences and assets in Premiere Pro, After Effects and Encore. Creating dynamic links means you don’t have to render and import when moving assets between applications. 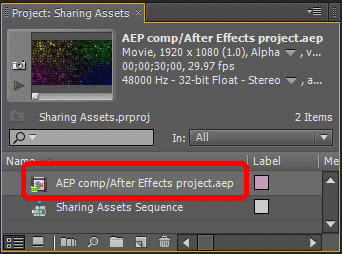 For example, instead of rendering an After Effects comp and then importing it into Premiere Pro, you can link to the After Effects comp from within Premiere Pro by choosing File > Adobe Dynamic Link > Import After Effects Composition (above). The linked comp shows up as an asset in the Project panel (right). You can add it to a sequence, trim it and apply effects to it. If you scrub through it or play it, it will play just as it would in After Effects.

If you want to change that linked After Effects comp, you can go back to After Effects and edit it or, from within Premiere Pro, right-click on the clip in a sequence or the Project panel and choose Edit Original. Any changes you make in After Effects will show up immediately in Premiere Pro (below). Because no rendering is needed, you save time and retain the asset’s original quality. 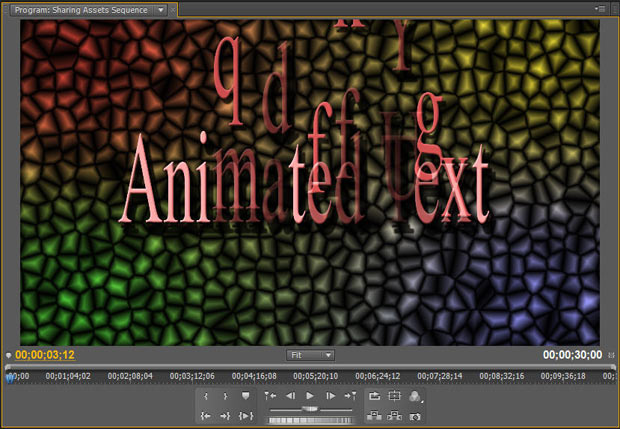 Any changes made to a linked After Effects comp, including animated text like this, show up in Premiere Pro.

Selecting multiple clips and choosing Replace With After Effects Composition replaces those clips with a single clip linked to the new After Effects comp.

Once again, there is no need for intermediate rendering. Sequences show up in Encore in their original, pristine condition. If you want to make any changes, simply return to Premiere Pro or After Effects, perform any needed edits, and click Save. The changes show up instantly in Encore. Only when you burn a DVD or Blu-ray disc or create a “Flash DVD”, will Encore render your Premiere Pro sequences or After Effects comps.

One advantage Premiere Pro has over other non-linear editors is that it keeps all video files in their native format. There is no need to transcode to enable editing. In particular this is true for AVCHD. Most AVCHD clips are Blu-ray “legal,” meaning they can be burned directly to recordable Blu-ray discs and will play back smoothly on Blu-ray drives. So, some might logically conclude that by dynamically linking a Premiere Pro AVCHD sequence to Encore, that sequence could be burned to a Blu-ray with no additional transcoding needed. That is not the case. There are some technical issues that preclude that.

You can place Blu-ray “legal” AVCHD clips on a timeline in Encore and burn a Blu-ray with no need to transcode those assets.

What you can do is import AVCHD files directly into Encore, create a single timeline, and add and arrange those files on that timeline (above). In that case, those AVCHD files will not need to be transcoded (below) as long as they meet Blu-ray specs (see Encore Help). This is a great way to quickly and easily distribute “dailes” via Blu-ray discs.

Blu-ray legal AVCHD clips show up in the Encore project panel with notations that no transcoding is needed if you are creating a Blu-ray disc.

next page: editing audio in Audition, plus using Photoshop with Encore, After Effects, and Premiere Pro

As you work on clips in Premiere Pro or After Effects, you might need to do some audio work that goes beyond the capabilities of those two programs. For example, removing noises like an electric hum, a motor, or vinyl record clicks and pops. Your best bet is to use Adobe Audition. Until recently, Audition had been sold only as a standalone program. Now it’s part of CS5.5 Production Premium.

From within Premiere Pro you can select a clip, several clips, or an entire sequence, choose Edit > Edit in Audition, and then choose Clip or Sequence.

The view in Audition’s Spectral Frequency Display of the audio portion of a video clipped before and after using the Noise Reduction effect.

After you edit and save those clips within Audition, the changes show up immediately in the replacement clips in Premiere Pro. To do any additional editing in Audition, right-click on a clip in Premiere Pro and choose Edit Original.

The process is similar in After Effects. Select a single clip, either from the Project panel or a comp layer, and choose Edit > Edit in Audition. 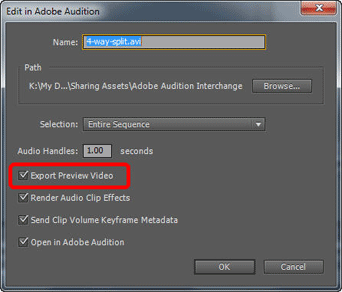 After you edit clips from a Premiere Pro sequence in Audition, you need to take one more step to have those changed clips show up in Premiere Pro. Choose Multitrack > Export to Adobe Premiere Pro. You can then choose to add the entire set of clips to new audio tracks in your sequence.

Working with Photoshop in After Effects and Premiere Pro 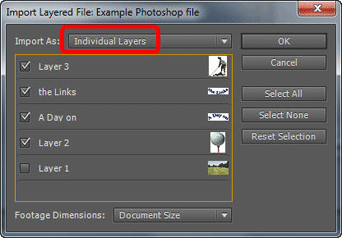 Photoshop is an important part of the Adobe Production Premium video production workflow. When importing a layered Photoshop file into Premiere Pro, you can choose to import or merge selected layers (as seen at right). In addition, you can have Premiere Pro automatically create a sequence with the selected layers in separate video tracks. 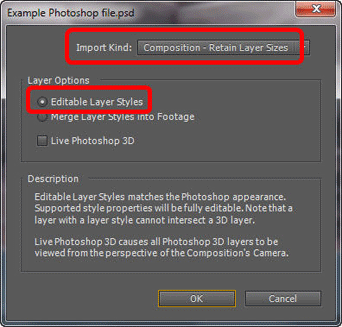 One other advantage of the direct connection to Photoshop is that from within Premiere Pro or After Effects, you can open any graphic or image in Photoshop, create separate layers, and then import that layered Photoshop file back into Premiere Pro or After Effects. This approach is used frequently to select objects in a photo to create a “dimensional still;” a technique that gives the sense of 3D motion to what started out as a flat image.

All menus in Encore are Photoshop files. This gives Encore a significant competitive edge over other DVD authoring products. Click the Edit Menu In Photoshop button (circled in the figure below) to open the currently active menu, whether it’s a menu from Encore’s library or one you are building from scratch. That opens the menu (named slightly differently than the original template or menu name) in Photoshop with all layers intact. Make any changes you want, save that work, and those changes will show up in Encore. The original menu or menu template remains unchanged.

The typical production studio workflow requires rendering video projects, special effects and animations as well as saving image or graphic files. If you want to make changes, you need to reopen those projects and then render or save them again. Once you try some of the Adobe Production Premium asset sharing techniques, you likely will not want to return to that old school video production approach.

Jeff Sengstack is a video producer, a junior college instructor, and creates video training for lynda.com, including the tutorial Premiere Pro – Color Correction and Enhancement

FTC Disclosure: The creation of this article was partially subsidized by Adobe. Although they approved the general subject, they had no control over its editorial content.