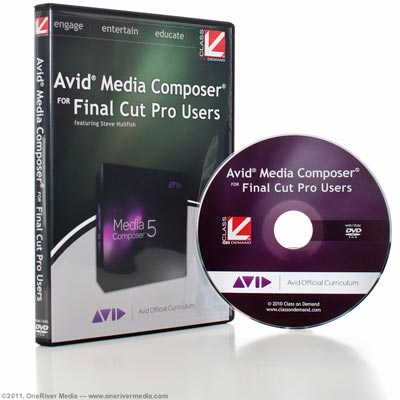 With the recent release of Final Cut Pro X from Apple, it became quickly apparent that my facility was not going to be able to adopt the new software from them. This coupled with the fact that Apple has completely slaughtered their line of pro apps, it was clear that Final Cut Pro in general was a thing of history for us.

My first introduction into non-linear editing (NLE) software was back in the early to mid nineties using Adobe Premiere. It was simple, but worked, and was inexpensive compared to the other options like Avid. Around 1996 we got our Media100 system, which allowed us to edit video professionally with proper hardware ingest and output. As good (and sometimes bad) as Media100 was for us, it still allowed us to use a system that freed us from the huge expense of owning an Avid system, despite the high cost of the Media100 system itself.

Then came along Final Cut Pro and everything changed. I welcomed it with open arms; in a time when I thought the Macintosh itself was destined for the graveyard (we were slowly migrating to more Windows NT workstations at the time than we were Macs). I’ve owned every single version of Final Cut Pro since that very first version 1 release. I’ve beta tested and consulted for Apple for both Final Cut Pro (not for FCPX however) and QuickTime. In a nutshell, I definitely know my way around Final Cut Pro!

Throughout the years I’ve used NLE systems (since 1993, starting with Premiere), I’ve never used an Avid system. Seems odd, now that I look back at it. Thanks to the whole FCPX fiasco, I decided to finally give Avid Media Composer a serious chance, after all these years. To my amazement, not only does Media Composer fit the bill, it has more to offer than I could have possibly imagined. The functionality it offers, combined with the almost limitless customizability is what really won it over for me. Quite frankly, I wish I could have integrated Media Composer sooner into my facility, but honestly, hardware compatibility had always been a problem, which ultimately always created a stopping block. Luckily, Avid is opening up; things have changed and are continuing to change. The timing is great.

Getting Up To Speed

So in order to get up to speed from the switch from Final Cut Pro 7 over to Avid Media Composer, I figured the best way to crash-course the learning curve was with instructional tutorials that was specifically tailored for Final Cut Pro users. After all, I didn’t need to learn the basics of how to edit, but rather, how my established decade-long Final Cut Pro skills could transfer over into learning Media Composer-quickly.

Steve Hullfish is the instructor for the series (Editorial Director’s note: he also has his own channel on PVC), and does a great job. I like that he specifically shows how certain functions are performed in Media Composer, as compared to Final Cut Pro. I also like that he’s working on a Mac (all the other Media Composer video tutorials I’ve seen are done on a Windows interface). This is for Final Cut Pro users after all, so I don’t want to have to remember things like having to use the Command key instead of the Control key. 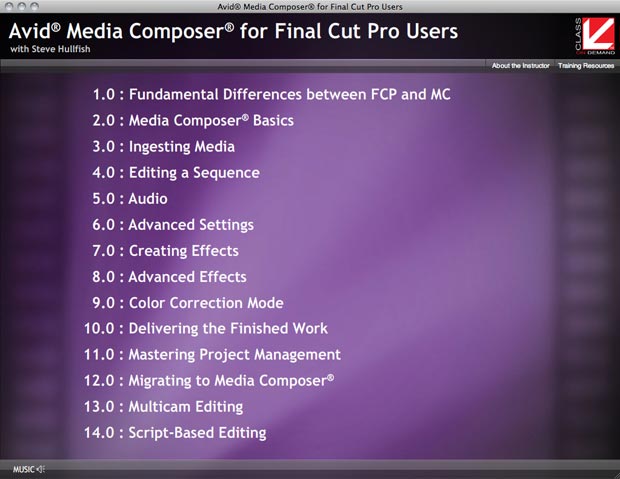 The menus in the DVD are very easy to navigate. Note these are application-based DVD videos for Mac and Windows, and NOT a low-resolution video DVD for your boob tube.

What really opened my eyes to the instruction was how well Media Composer does certain things so much better than in Final Cut Pro, and in some cases, where Final Cut Pro didn’t even have a function at all for some tasks. Some functions that really opened my eyes were things like, how quickly and smarter sub clips can be made, nesting sequences, how just about anything and everything can be dropped into a bin and re-used elsewhere in your project, even just a simple color correction setting.

Overall, the instruction was great. I would have liked to have seen a few more techniques on how similar Final Cut Pro techniques transfer over into Media Composer, but I understand every single function can’t be explained in what’s already a 4+ hour training guide. Class on Demand supplies project files that you can use to follow along with that come with the DVDs or that can be downloaded from their server (about 2.8 GB worth).

One of my favorite chapters is chapter 12, “Migrating to Media Composer” with the two sub-chapters, “12.1 – Unique Features to Media Composer” and “12.2 – Comparing Features”. With chapter 12.1, Steve covers specific features that you wouldn’t find in Final Cut Pro. This was really eye opening stuff, as it helped me realize just what I’ve been missing all this time. In chapter 12.2, Steve literally opens up Final Cut Pro, does a function and does the equivalent function in Media Composer-this was really helpful instruction. As I was starting to get comfortable with Media Composer prior to this chapter, I was beginning to wonder how certain FCP functions translated over, and in this chapter, many of those questions were answered. 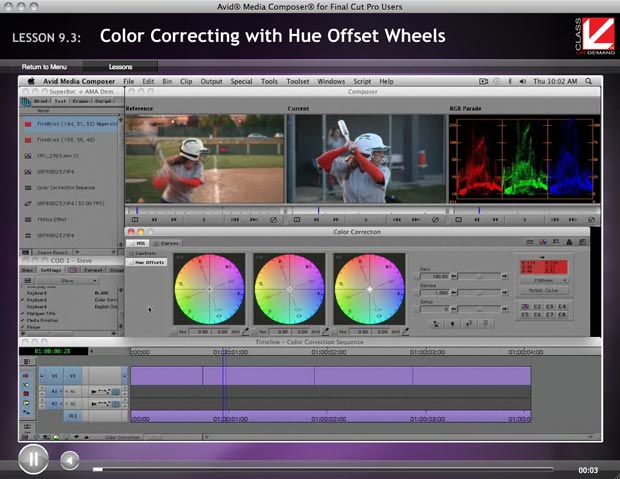 The Avid interface in the video instruction. Note the OSX interface for us FCP users.

Class on Demand offers the training in both an online streaming version and a shippable DVD version. If you’re pinched for time and need the instruction “now” then buy the streamable version (which uses Windows Silverlight encoding and licensing). But if you can wait for it to get shipped, then definitely buy the DVD version instead, which incorporates an easy-to-use menu system with no lag times and a scrubbable video timeline. I found the streamable version to be a little hit or miss; in some cases I needed to refresh the window in order to start a new chapter or I’d get a Silverlight licensing error. It actually wouldn’t play at all on my main 17″ MacBook Pro, which is only a couple of months old with the latest drivers, so I couldn’t figure out what the problem was there. I resorted to either playing the stream off a MacPro desktop, or a 10″ Windows netbook. To add, if I needed to replay a specific instruction over (and over) again, the Silverlight stream would have to re-buffer every single time, even on video that had already been loaded, which ended up causing a little bit of sluggishness. Lastly, I had my login zap out a couple of times, requiring Class On Demand to reset it. Somehow their system thought I was logging in from too many computers or something, but I hadn’t, so I’m not sure what the issue was. At any rate, they were extremely quick to reset the login for me and I was good to go.

So again, if you can wait for the shipment, order the DVD version, as that will play on Mac or Windows, and without buffering issues. Also keep in mind that the online version only has a two-year viewing license, with limited “viewing locations”, where the DVD version imposes no such regulations in both regards.

I give this instructional series a four-out-of-five rating. The instruction is solid, and fairly complete in all forms. The online streaming version is a little cumbersome (thanks mostly to Silverlight), but the DVD version is hassle-free with quick and snappy playback. I definitely recommend this series for Final Cut Pro users making the switch to Avid Media Composer. It’s already helped me make a quick transition.

Burning questions about Cinematic Mode and how you edit it

Adventurer and filmmaker Renan Ozturk on why he uses Teradek