How I turned 1 tree into 8 million

Redshift3D Forest
How I turned 1 tree into 8 million.

A 4K version can be viewed by clicking this image. 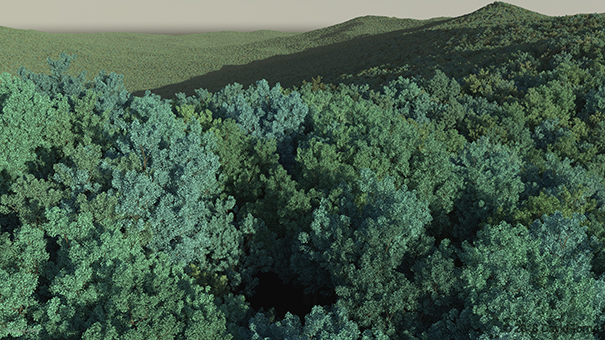 If you like this work, or just wanna see more of my crazy stuff, you can follow my Vimeo channel and my Instagram. I am always posting some crazy idea, or technical creation at both places. Also if you want to see a tutorial about anything I’ve specifically built, or any vfx related thing really let me know in the comments. If I have the time, and of course the knowledge on your request, I’ll try my best to put something together.

So Redshift3D has been around for a long time, but has only recently made it’s way to Cinema4D within the last five months. During that time I have been learning and experimenting with it a lot. For those who don’t know, Redshift3D is a third party renderer that harnesses the power of a graphics card GPU. GPU computing power has been a great game changer for small shops and individual artists too. Having this extra power at their hands is helping them produce very high quality 3D renders in a fraction of the time. GPU is certainly giving CPU a run for it’s money, and honestly looks to be the path moving forward.

Otoy’s Octane was first to gain major traction in the Cinema4D market, and it does things very well. I have heard though that it has issues with texture size caps and a reputation for being troublesome in a large production pipeline. They have certainly made a mark with users, but I personally feel Redshift3D is right on it’s heals already, and is definitely going to be a valiant competitor. My initial impression with Redshift3D got me hooked nearly right away with the pricing sales pitch.  You pay for the core engine and you get the host app plugins for free. That means, you buy this renderer, and if you have 3DSMax, Cinema4D, Houdini, Maya, etc… You can use it with all of them (barring version compatibility). That’s impressive in my book.

Recently I was roaming the Redshift3D forums, Vimeo, and YouTube universes looking at various tutorials, and creations people have made. This has become my nightly ritual, and an article on the Redshift3D forums caught me eye. It was boasting about rendering 8.6 Trillion (not a typo), yes TRILLION triangles. Upon reading further down in that article, another user mentioned about pushing things to 1 Quadrillion. Let’s think about that for a second. 1 Quadrillion….. that is an unheard of amount of triangles to render, let alone have in your scene. I absolutely had to learn more about this dark magic. Surely to accomplish this, it had to be some ridiculous networked warehouse of machines tethered together like some Frankenstein experiment.

Instances. Apparently just super smart computing using instances is the key to getting these crazy values. While advanced in some areas, I am still relatively new to a lot of the 3D world. Setting out to see what I could learn and accomplish in this world of instances, I had chosen to create a Redshift3D forest. That sounded like it would be easy enough to tackle. Locating free tree models was easy enough, they exist all over the internet. Now I just had to place them millions of times in my scene. That’s the simple way to say it at least, but my journey turned into a week long excursion of material conversions, documentation reading, web tutorial viewing, and numerous build iterations. Each expanding upon the previous successes and failures of my attempts.

The model I used and explain with in the tutorial can be found here: Meta-Elements Tree 04

Here is a collection of early attempts, and screen caps during that week of creating a Redshift3D forest.