Solid gains in the new FCPX release, with no obvious drawbacks. 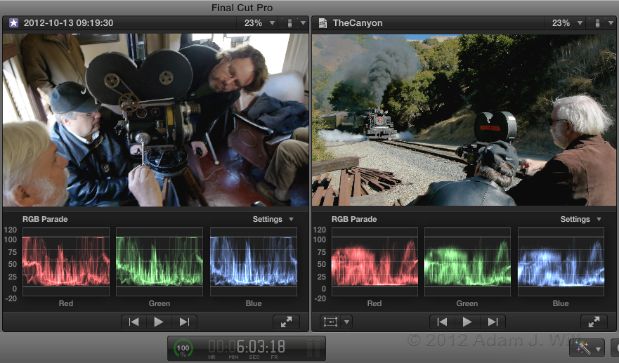 Someone has to be the first to stick a toe in the water when a new update comes out, so I jumped in with both feet. I’m running FCPX 10.0.6 on two different Macs, and so far, everything is OK. I plan to upgrade Mac #3 later today.

Yeah, I know: Apple’s anointed few have been running pre-release versions for a while. I’m just a regular schlub, so I get it when everyone else does (on the flip side, I have nothing to lose by telling it like I see it, grin). I installed the update atop FCPX 10.0.5 on a MacBook Air running 10.6.8 and a mini running 10.8.2 and put it through its paces for a few hours, trying to break things.

The good news: I wasn’t able to break things.

The high points, from my quick fiddling about:

Paste Attributes! You can now copy some or all the modifications you’ve made to one clip (color correction, distortion, compositing, filters, etc.) and paste them on one or multiple other clips. Finally, you don’t have to re-create complex effects from scratch on every clip, or create compound clips simply to be able to apply the same tweaks to multiple individual clips.

RED support. There is a new RED plugin, a unified installer that supports both FCP 7 and FCP X. It even supports a Rocket card if you’ve got one installed.

There’s been an XDCAM importer for a while; check out Apple’s full list of plugins and importers. Between the Canon XF importer, the XDCAM importer, and the new RED plugins, there isn’t a source format in my library I can’t bring into FCPX now.

Just a reminder: if you’re on 10.8 and need to install Canon’s XF Importer for XF-format cameras including the C300, you’ll need to select 10.7 as your OS version on Canon’s site.

Once you download the plugin, change the OS version number on your Mac (!) in a Terminal window (as usual, proceed at your own risk, and make backups before you do this!):
Type “sudo nano -w /System/Library/CoreServices/SystemVersion.plist”
Enter your password, and a text-based editor will open. Look for the lines like:

Next, install the Canon plugin, then change the 7s back to 8s, and press Control+O again. Use Control+X to exit the editor.

“Vertical” ‘scope arrangement makes better use of screen space, especially if you’re on a single monitor and have the Inspector window open: 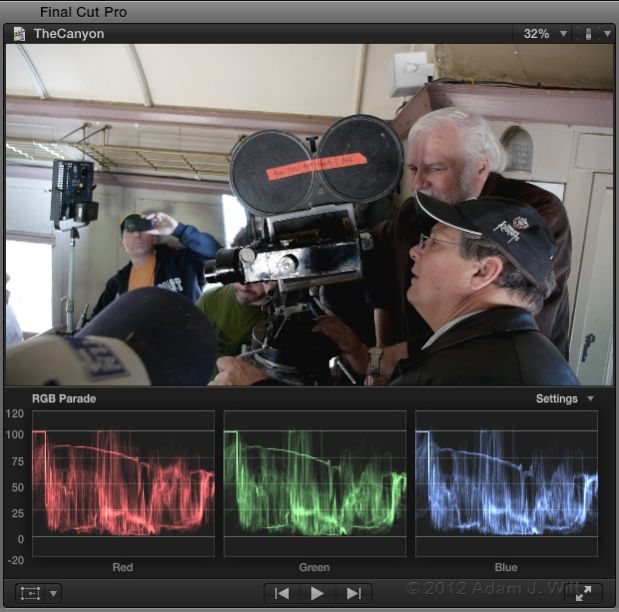 It’s even more helpful when you turn on the new Event Viewer (source monitor):

Interestingly, I’ve grown so comfortable with FCP X’s single-monitor mode that I don’t find the restoration of the dual-monitor mode as exciting as I thought I would.

On the downside, some things still aren’t fixed:

Not enough relief for small-screen users: yes, vertical-modes ‘scopes help, but you still can’t hide the Event Browser entirely, nor can you rearrange the various components of the FCP X window. If you need to have the inspector and the ‘scopes open (for example, to do some color correction), you’re still stuck with a shrunken Viewer, an inspector that can’t be resized vertically to make its controls accessible without excessive scrolling, and a completely useless Event Browser wasting valuable screen space. 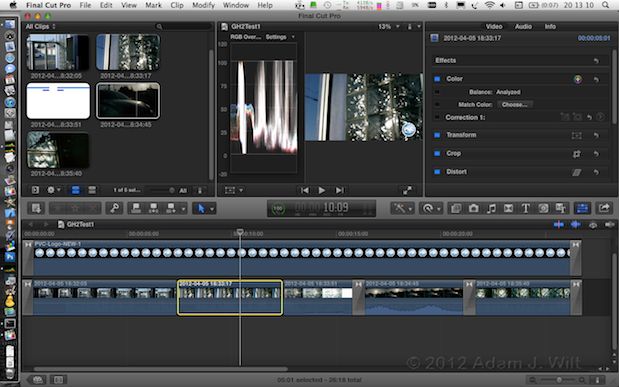 FCPX on a 13″ MacBook Air, with Inspector and ‘scopes shown. 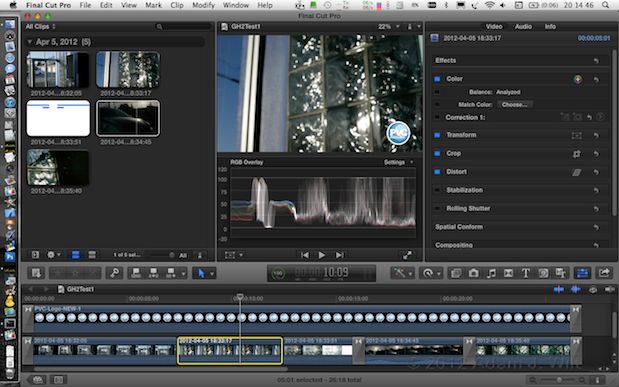 Modal-window clusterfrack: the clown-car faction in Apple’s formerly excellent user interface group have served up something that even Windows 8 users can point to and laugh. For several OS versions, Help Viewer has been an always-on-top-whether-you-like-it-or-not window, ignoring Command+Tab or any attempts to bring another window to the fore… until FCP X came along! FCP X’s Import window is itself an always-on-top window, and it even forces itself in front of the Help Viewer—whether you want it to or not (to be fair, this isn’t new with 10.0.6, but I just noticed it). 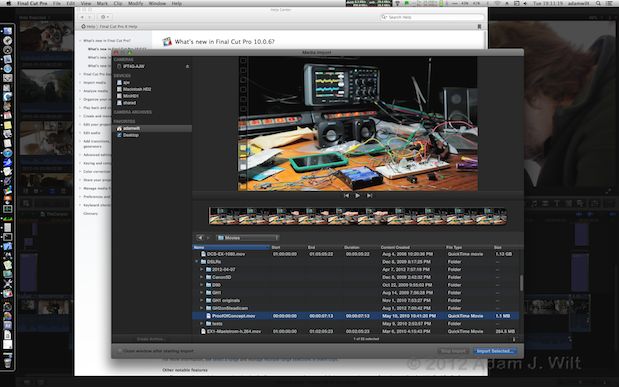 Turnabout is fair play, I suppose; in FCP X’s main window, as with most other OS X windows, asking for help gives you an aggressive window you’re always having to drag out of the way to see the thing you wanted help for in the first place, but FCP X’s Import window now unalterably sits on top of the very help you wanted to get for it. 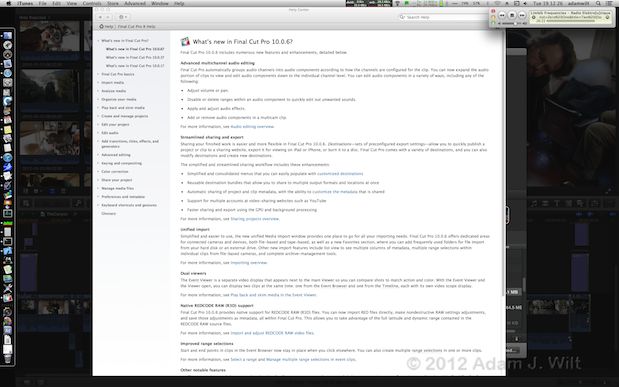 Select another program (here, iTunes), and Help Viewer jumps on top… except for the also-always-on-top iTunes mini player!

Whatever happened to “the user is in charge”? Sheesh.

(Onyx lets you civilize Help Viewer somewhat: turn off Parameters > Misc. > Help Viewer: Set window to floating mode, and not only can you pop windows in front of Help Viewer as you see fit [and Command+Tab to and from it], you can get it to display on top of FCP’s Import window, which it can’t do when it insists on being topmost!)

No clip ganging across monitors: yes, we now have the Event Viewer should we need it, but there’s no ganging mode so that one monitor’s playback tracks the other’s. There’s also no “Frame Viewer” mode (splitscreen viewer for filters, next/previous clip for color matching, etc.). Just because we have two monitors now doesn’t mean we have all the functionality we had in FCP 7.

Looks like a solid enough upgrade. I’ve updated several FCP projects on two different Macs with no ill effects so far, and only had one crash—but, as with the few FCPX crashes I’ve had previously, I’ve lost absolutely no work as a result.

I’m going ahead and updating my third Mac: I, for one, welcome our new 10.0.6 overlords.

As usual, FCPX will want to update your projects, making them incompatible with previous versions, so if you want the option to revert to an earlier version (simple enough to do: duplicate your existing FCPX, give it a new name like “Final Cut Pro 10.0.5”, and park it in a backup folder before upgrading), back up your FCP Events and Projects before running 10.0.6 on them. 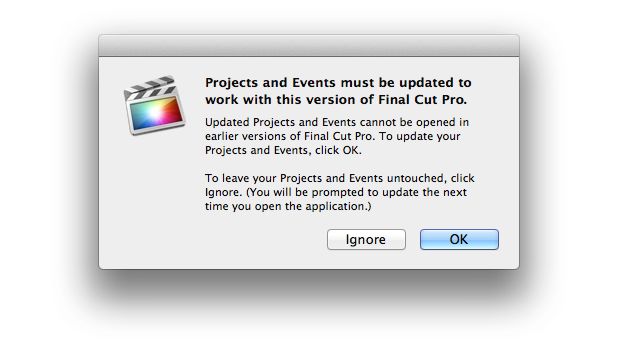 Disclosure: There is no material connection or relationship between me and Apple, other than that I’m a (sometimes rather exasperated) customer of the company. I was not offered any inducements or compensation to write this article—no cash, no freebies, and sure as heck no early access to the software!