Jon Chappell talks about a tool that might save your butt

If you’re a serious Final Cut Pro user then you are probably aware of Digital Rebellion and the tools that they make. Be it their popular Video Footage Calculator, Preference Manager for Final Cut Studio or the recently released FCP Versioner (which I reviewed on PVC) these tools tend not to be flashy but rather very, very useful. They have also recently release FCS Maintenance Pack. Jon sent me a copy and after using it I had a number of questions about the product. A question and answer session follows.

I won’t list out all of the utilities included in this package. You can click over to the official page and review them or check out the graphic at the end of the article. Jon dug a bit deeper into the package itself and discussed the origins of the product in our Q&A:

What is FCS Maintenance Pack?

It also comes with a task scheduling utility so you can perform these tasks automatically.

If you haven’t been having any noticeable problems with Final Cut Pro and Final Cut Studio, do you need Maintenance Pack?

FCS Maintenance Pack is not just limited to fixing problems though. It has been designed as a prevention, diagnosis and cure rolled into one. You can run common housekeeping tasks to keep Final Cut Studio performing well and minimize the chances of a problem developing, use Crash Analyzer to diagnose your crash logs if a problem does occur, and then use System Toolkit, Project Repair, QT Repair, or one of the many other tools to fix it.

Some of the applications, while being invaluable if a problem arises, are useful applications in their own right. Plugin Manager, for instance, allows you to organize your Final Cut Studio plugins into groups, selectively enable and disable them, toggle between making them available to all users or just the current user, and painlessly install new plugins – all without having to worry about which one of the many plugin folders the plugin resides in.

So FCS Maintenance Pack is still useful for users who might not currently have problems, and it will be invaluable once problems do crop up (and I can guarantee they will sooner or later).

FCS Maintenance Pack is very cautious about such things. If an important file needs to be changed, it will be backed up first. If something needs to be removed, it will be placed in the Trash and not simply deleted.

Common sense is always advised, however.

Could some of these tools possibly save the editor from having to reinstall the Final Cut Studio when they might be having problems?

Yes, this is what it is designed to do. Reinstalling Final Cut Studio can fix most problems, but in a lot of cases it is completely unnecessary. Tools like Crash Analyzer will help to diagnose issues and let you know if one of the tools can fix it or whether a reinstall is necessary. 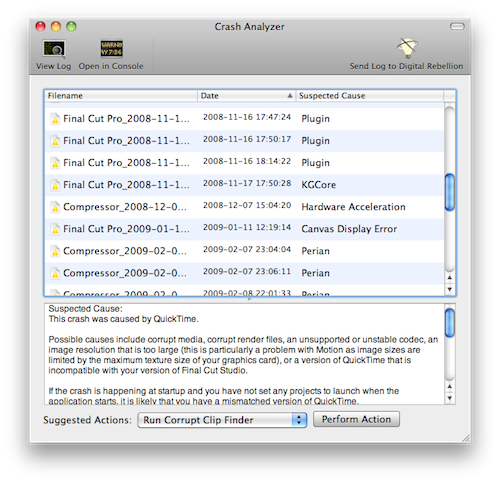 The Crash Analyzer gives a Suspected Cause of the crash

What causes corrupt Final Cut Pro projects or corrupt QuickTime files? How can these things be avoided?

Many factors can cause this such as RAIDs/SANs, backup software, copying the file to a non-HFS drive, changes in newer versions of QuickTime, etc. These things are hard to avoid so the best advice I can give is to have a good backup policy in place. One of our other applications, FCP Versioner, can help with creating automatic project backups.

When (if) we get an updated, modern version of Final Cut Pro will these tools still work?

I have absolutely no idea what is coming up in new versions of Final Cut Pro so I can’t say what will work and what won’t. However, the very nature of computers means that people will still have problems with a redesigned version of Final Cut Pro. Perhaps not the same problems, but problems nonetheless.

However, several of the tools in the pack such as File Salvage and QT Repair don’t even need Final Cut Pro installed on the system in order to operate, so they would not be affected by any changes Apple makes to future releases.

But if Apple updates Final Cut Pro to use modern technologies, that would allow us to make the software even more useful. There would be an increase in functionality, not a decrease. 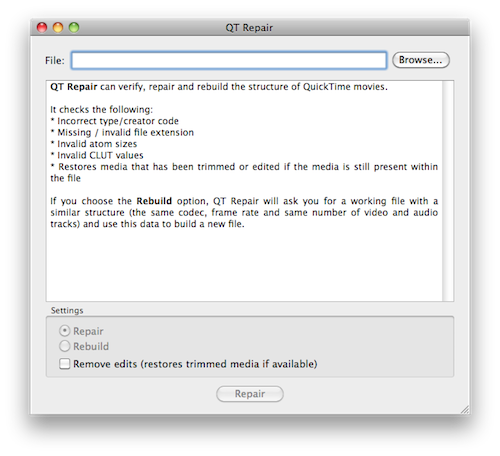 QT Repair can be used independently of Final Cut Studio

What advice would you give the editor to keep their system healthy and in good running order so they might not need FCS Maintenance Pack?

According to my Crash Analyzer statistics, there are two common causes of Final Cut Pro crashes. The first is using long-GOP media (H.264, MPEG-2, AVCHD, XDCAM, etc) in the timeline. Although you can sometimes get away with this, it is more stable and much faster to edit (or at least render) in ProRes.

The second cause is using an under-powered graphics card or pushing your graphics card too hard. One thing I have noticed with Final Cut Pro is that it is more likely to crash if it can’t keep up with what you’re doing. If you’re editing 1080p H.264 with lots of filters and RT Extreme switched on, you’re far more likely to crash. So if you do experience instability, it’s best in those cases to transcode to ProRes and set your RT settings to Dynamic quality and/or frame rate, or switch RT back to Safe.

Corrupt preferences can be a cause of many strange issues so our free application, Preference Manager, is a good tool for dealing with them. Our recommended workflow is to trash your preferences, launch Final Cut Pro, set your settings back the way you’d like them and then use Preference Manager to back them up. Now you have a stable set of prefs that you can restore when things go wrong without losing all of your settings. Locking your preferences is a good way to prevent future corruption too.

Also, periodically trashing caches is a good idea as these can sometimes slow things down.

But FCS Maintenance Pack is worth considering for applications like Plugin Manager, System Toolkit, Autosave Cleaner and Path Manager, which are useful applications to have on your system regardless of whether or not you are having problems.

Did you build these tools out of your own need or more out of request from other editors?

Both really. I was working as an editor for a TV channel and I had probably the most unstable Mac Pro I have ever come across. The facility was PC-centric and the IT guys didn’t know anything about Macs so I was basically left on my own to sort out the problems. Unfortunately this was a TV channel with very short deadlines so I just had to develop quick workarounds without having the time to do a full diagnosis of the issues. That was where I got the idea for a suite of tools for easily fixing things with a press of a button.

I have had a lot of inspiration from others though. We’ve always been very receptive to feedback and try to incorporate as many feature requests as possible. Forums are a useful resource too because you get a feel for the most common problems that people are suffering from. I developed Compressor Repair because so many people were posting about problems with Qmaster.

Having to solve problems like this wastes so much time for a working editor, and I feel it shouldn’t be necessary for them to have to worry about things like this. I believe that in a perfect world, editors would solely deal with the craft and not have to spare any thought to technical aspects.

FCS Maintenance Pack is designed to be very easy to use so if you’re not well-versed with the inner workings of OS X, you can still fix problems quickly. Crash Analyzer in particular is popular because very few people understand how to read crash logs and it provides an easy way to discover the source of a problem.

And even if you are knowledgeable about OS X on a technical level, FCS Maintenance Pack will still save you a lot of diagnosis time. Time is not an endless commodity in our industry and FCS Maintenance Pack is designed to get you up and running again as quickly as possible.

Why does Compressor / Qmaster seem to break and become corrupt and not be able to submit batches?

Compressor depends upon Qmaster, which depends upon several running processes and frameworks. This means there are many points of failure which increases the chances of something going wrong. If one of those processes isn’t running, everything fails.

Qmaster is also very poorly written, which is why it breaks seemingly at random even when you haven’t changed anything. It seems to be getting better (slowly) with every release though, which is at least a step in the right direction. 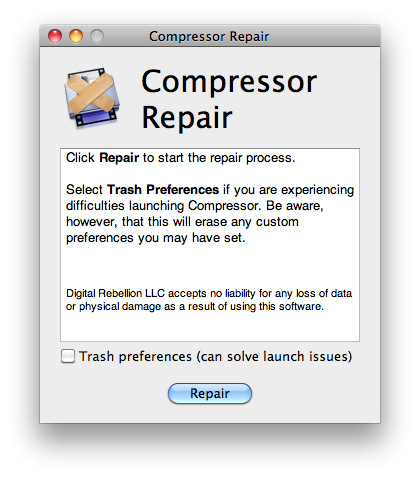 Compressor Repair, available for free separately as well as part of the pack, could save a lot of frustration when Compressor won’t launch

What does the future hold for FCS Maintenance Pack?

With every release, FCS Maintenance Pack becomes even more powerful and easy to use. We plan to continue this trend and tie the suite into other products for even more power, so watch this space.

FCS Maintenance Pack is $129 and a free 15 day trail is available.

The image below is the window of FCS Maintenance Pack Launcher, a good starting place when using the applications