The National Association of Broadcasters show has just wrapped up in Las Vegas and I was down there for a few days to check out some of the new gear. I'll be covering some products in more detail in the near future but we'll start off with a wrap up of some of the coolest new HDSLR gear coming to market this spring and summer.

Zacuto had a huge number of new products with them this year for NAB, including the new mechanical remote follow focus called the Tornado. The Tornado replaces one of the handles on your shoulder rig and mechanically connects you to a small follow focus style gear box mounted on your rods to allow change of focus without ever moving your hand from the handle. It sounds cool but to be honest I found the implementation of it highly disappointing. Rotating the large focus ring on the handle is not comfortable and the handle feels cumbersome. I was told that what I was trying out was pre-production so let us hope they make some big improvements to this. There was no word on pricing but this is Zacuto so expect it to be pricey. 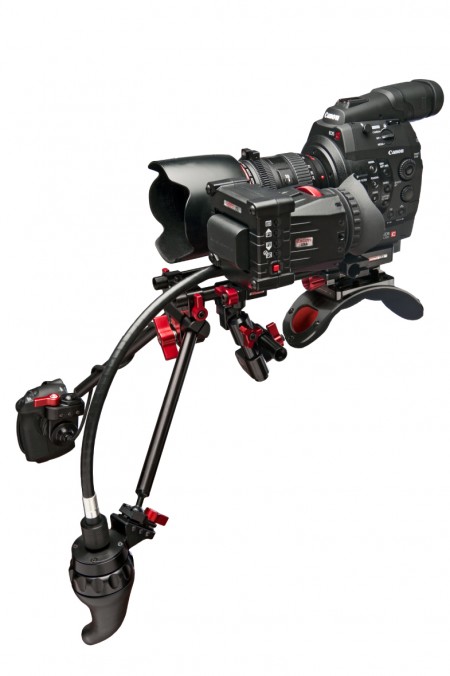 Next up they had a quick release version of their C300/Epic/Scarlet base plate. I was told to expect this to come in at about a couple of hundred dollars more than the regular base plate and it allows quick removal of the camera from the rod system as well as quick attachment of a new shoulder pad onto the bottom of the base plate. The new shoulder pad is very nice, much more comfortable than the current one that is available for the recoil rig and something I can see adding to my kit. There is also a new QR base to go on your tripod head. The intention here is that it remains on the head , allowing you to quickly remove the shoulder pad from beneath the QR base plate and then clip the whole thing into the waiting tripod plate. From shoulder to tripod in just a few seconds. I still prefer a Really Right Stuff setup for this myself, but the Zacuto system ties in nicely to the rest of their gear. Additional dovetail plates can be purchased allowing you to adapt anything to the QR system. 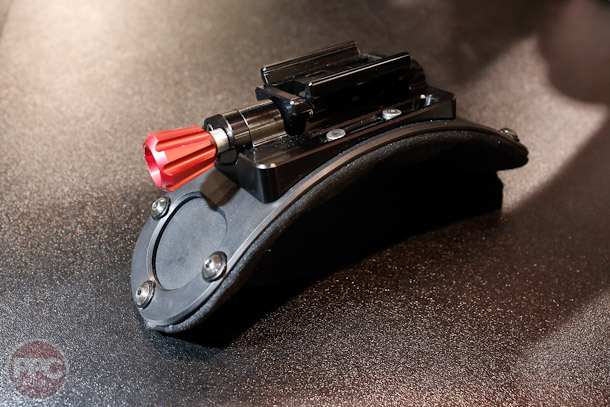 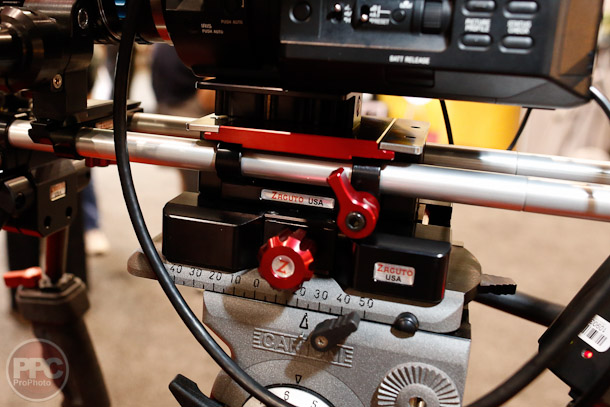 The tripod QR plate is quite big and bulky 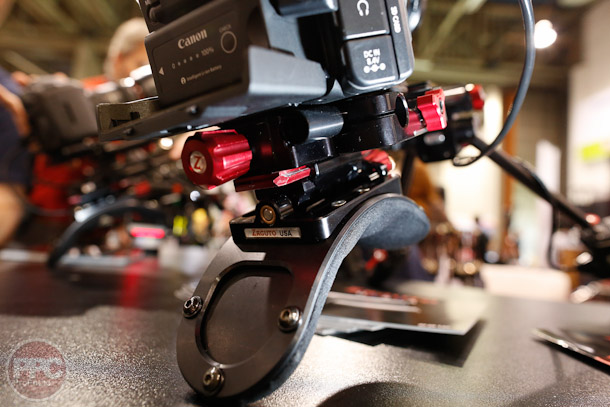 New QR shoulder pad attached onto the bottom of the new QR version of the C300 base plate via their dovetail plate.

Zacuto were also showing off a new Plasma Light Panel which looks to be very interesting. A more uniform light source than traditional LED panels and with the ability to run off mains power or Anton Bauer packs it gives you about 2000 lumens of light in a very compact unit. This should be shipping in about six weeks and will be available in either daylight or tungsten temperatures. 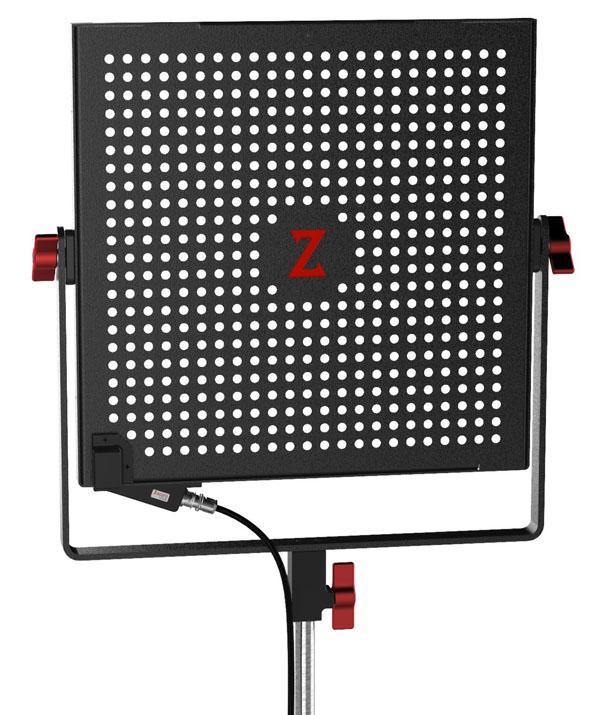 Arri have continued to expand their lineup of professional camera accessories of which I am a big fan. They have launched a universal hand grip set that is available with either 15mm lightweight rod clamp or a universal clamp for all rod standards. It's modular so you can make the arms as long or short as you want. As you would expect from Arri it is very well machined.

They also announced the new MBP-3 base plate for the Nikon D4 which can be adapted to the Canon 5dMK3 and Nikon D800. No word on whether it provides the correct rod height on a 1D X or 1D C though. Alongside the new base plate design is a modular cage system which allows you to choose whether you want the cage on one side or two.

Additionally there is a new Epic base plate along with a special rod mounted bracket for carrying external recorders and larger batteries on your rig. For full details check out their web page.

Redrock Micro continue to impress with their innovative products. The Ultra Cage concept has now been expanded from the C300 cage to a new DSLR cage for 'short bodied' cameras like the D800 and 5D3. 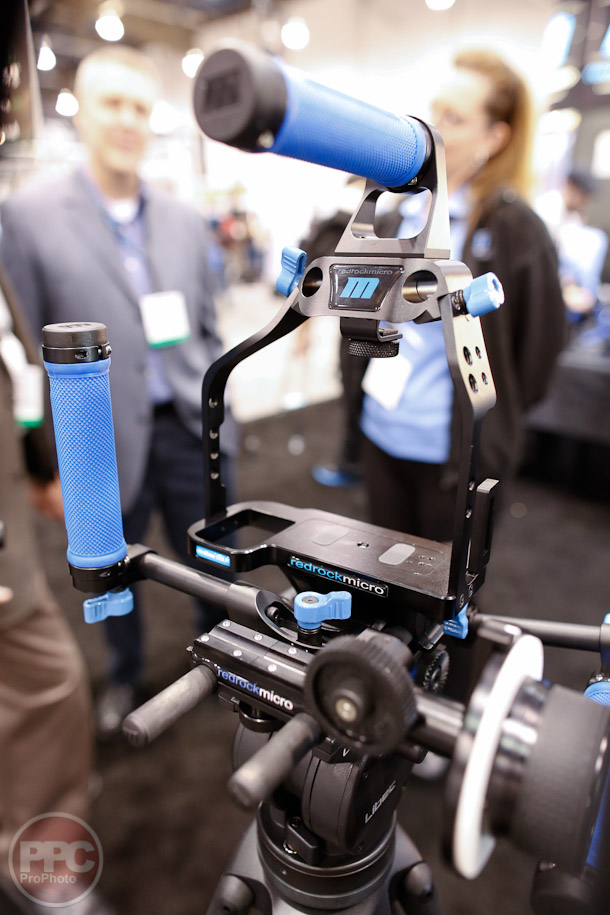 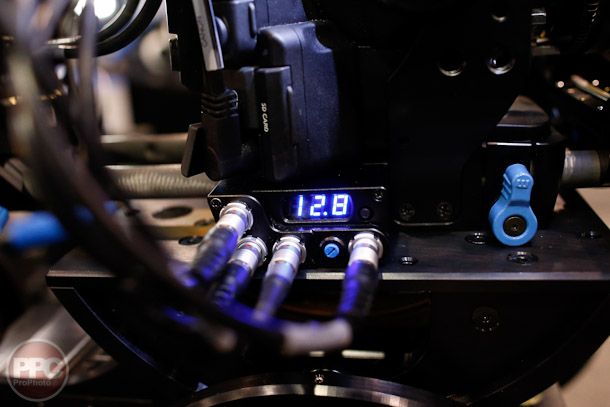 They also showed off their new power distribution system which can be integrated into the cages , or added to any other rig with a simple adapter. A d-tap cable then allows power monitoring and distribution to 4 accessories. This little gizmo is very small and very nicely made! If you have a recorder and a couple of monitors on your rig then this would be an excellent addition to simplify your power situation. 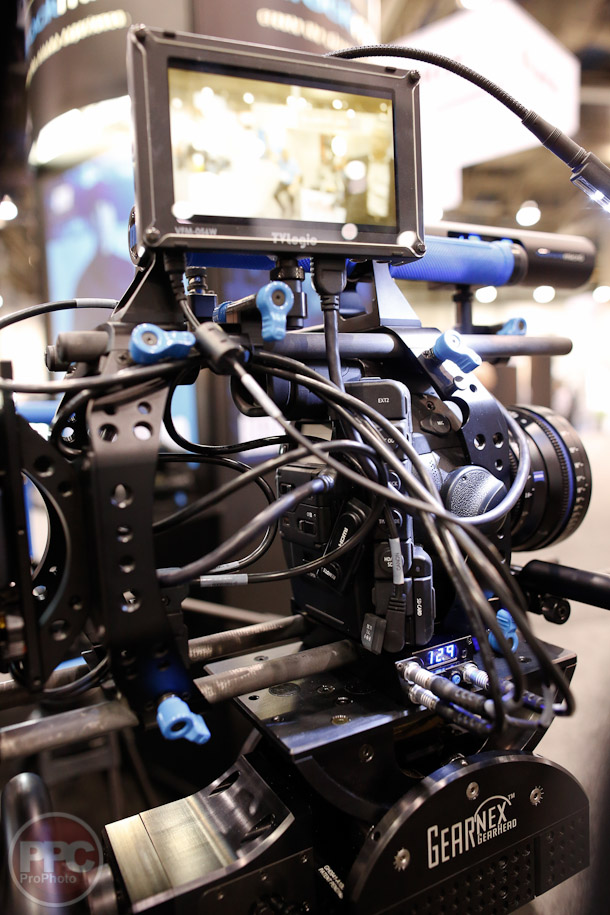 Last year we took a good look at Redrock's wireless follow focus system but the product failed to come to market yet. It seems that because the system uses Apple iOS devices within it, certification from Apple is necessary and highly time consuming. As a solution to this issue Redrock Micro have designed a new remote follow focus unit to work with the receiver and the new motors. These motors will be much much cheaper than equivalent preston motors, opening up the world of wireless FF to a much lower price bracket. A kit comprising of the motor, the hand unit and the receiver will be available June 1st for about $2400. For an additional $100 you can add the finger control which allows you to focus with your finger while your camera is on your shoulder. The finger wheel has been refined even more since last year and it really is first class, $100 is an absolute steal to add that ability. 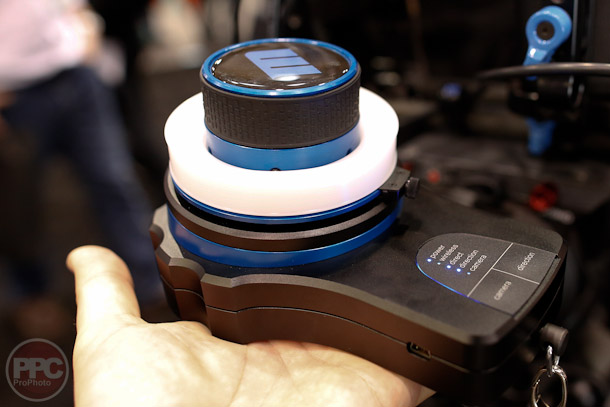 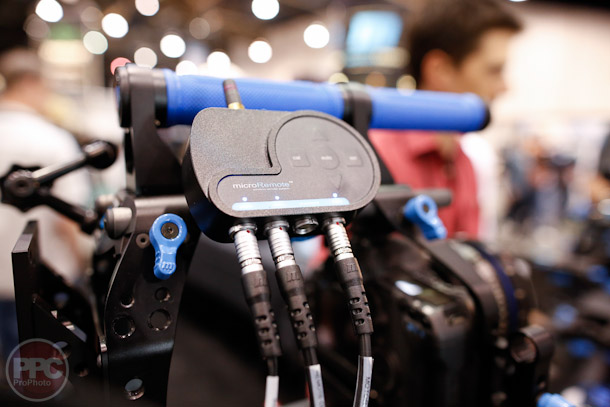 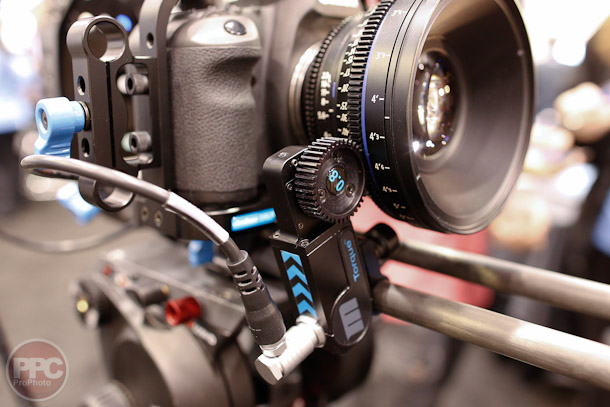 The CP2 primes have been popular for higher end HDSLR film work. They produce a decently sharp image in a well priced little package that offers full cine style geared focus ring and aperture. What has been missing though is a complimentary zoom lens and now Zeiss have answered with the first cine style 70-200 lens on the market. The CZ.2 70-200/T2.9 Compact Tele Zoom. Many of us knew this lens was on the way and I really hoped for a price in the $10,000 range but unfortunately this will be $19,999 when it hits store shelves. A nice lens to rent for a few days though at least! 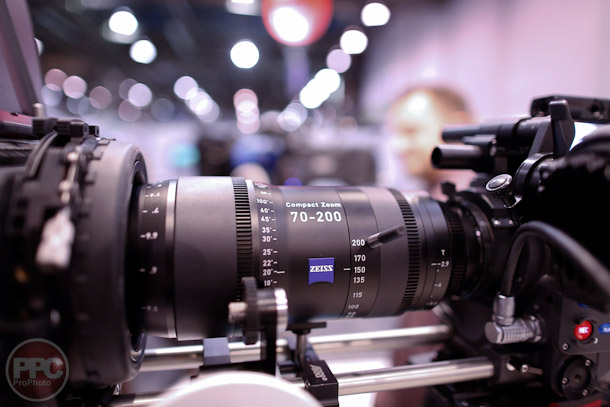 With the D800 and the D4 Nikon have really joined the HDSLR world with a bang this year. On the fourth day of the show they launched the new D3200 which sees the video technology spill down to their entry level camera. The 24.4MP sensor will deliver 1080p and full time auto focus during movie recording and will be available in April for $699. 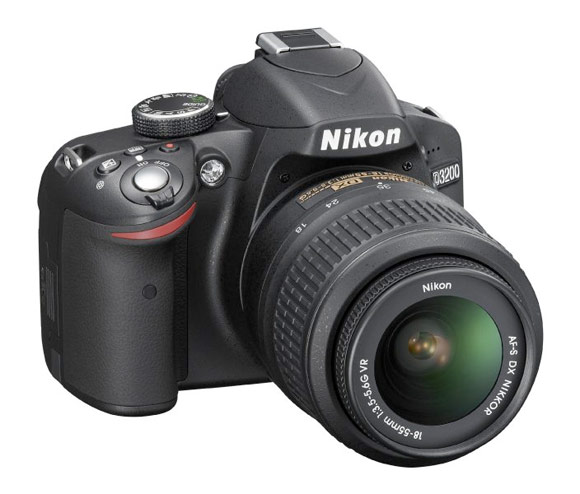 Amongst all the cool goodies hiding around the Kessler Crane stand was a new mini version of the stealth slider. If you are in the market for a small travel slider this should be your first port of call, I really liked this one and might just add it to my purchase list! 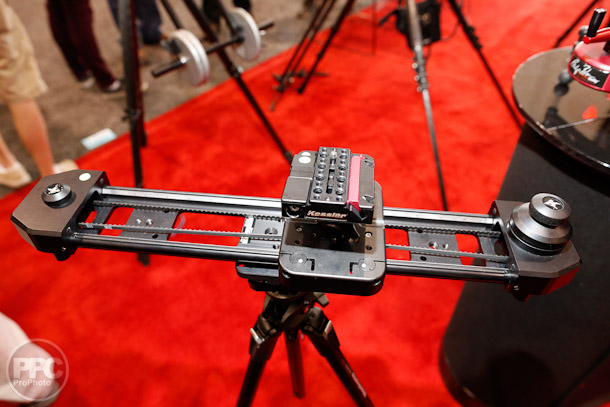 If you are using Kessler gear for timelapsing then you'll also want to check out their new lithium-ion battery pack with a neat little waterproof case and a pocket for the oracle controller. 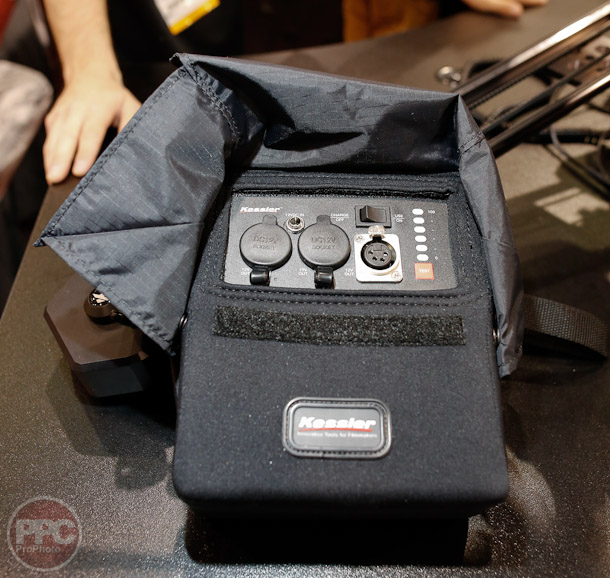 In the HDSLR world Canon had the biggest camera announcement with the EOS-1DC, the world first DSLR to capture 4k video. You can read about some technical details of the camera on my post over on ProVideo Coalition. You can also read the full details from the announcement last week right here. 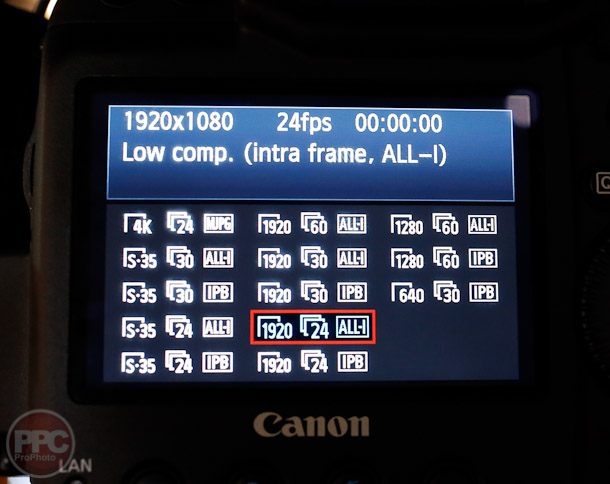 The Canon EOS-1D C offers a plethora of recording options. 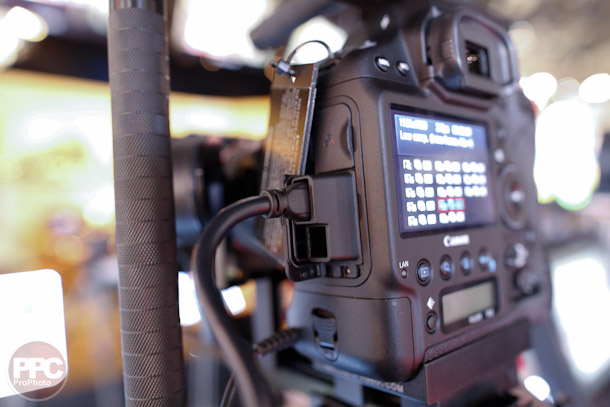 Rather than giving us what we want, an HD-SDI port, Canon have decided to stick with HDMI and instead offer a $0.50 plastic accessory to prevent you from pulling the video feed out of your $15,000 camera…… *sigh*

Blackmagic might not be a name that many of you are familiar with since they are known really for their video industry recorders, switchers and color correction software called DaVinci Resolve. The company astounded many people this year at NAB though by announcing a $3000 camera with a M4/3 sensor that shoots 2.5K (2432 x 1366) in 12bit RAW. Where did that come from ?!!? It really was the buzz of the show! So why put it so far down this list (not that its in much of an order) you might ask? Well you see the thing is that technically I wouldn't say this is an HDSLR as it's not designed in any way to take photos. But I'm including it due to it's price point which is less than a Canon 5dMK3. It has a Canon EF mount on the camera, a touch screen, HD-SDI output, SSD drives for recording and it will even record to Pro-Res ! It answers many of the prayers that HDSLR shooters have had albeit in a slightly clunky looking box. On top of that i comes with DaVinci Resolve which is a $1000 program ! With built in Pro-Res recording there's no need for an external recorder which can cost thousands , leading many people to say that this camera is essentially FREE! I think that's taking it a little bit far but it is a killer deal, of that there is no doubt. 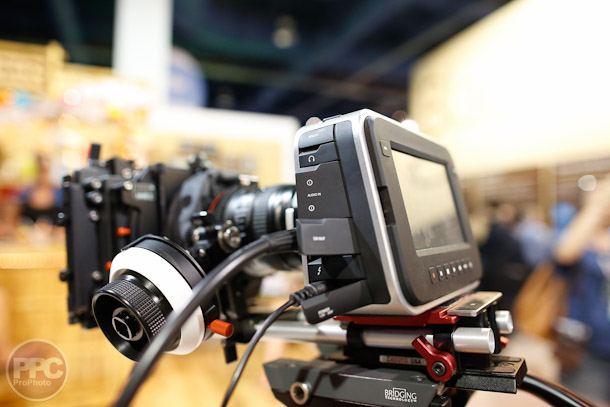 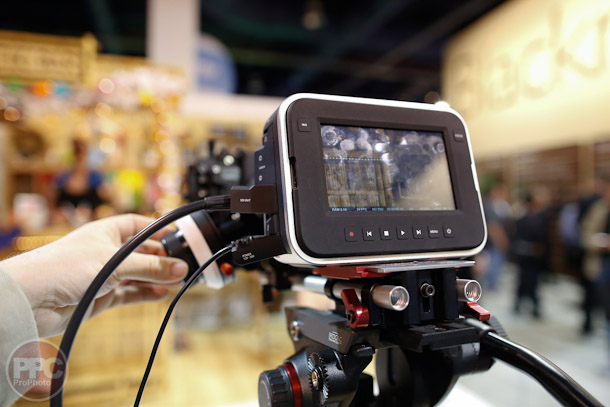